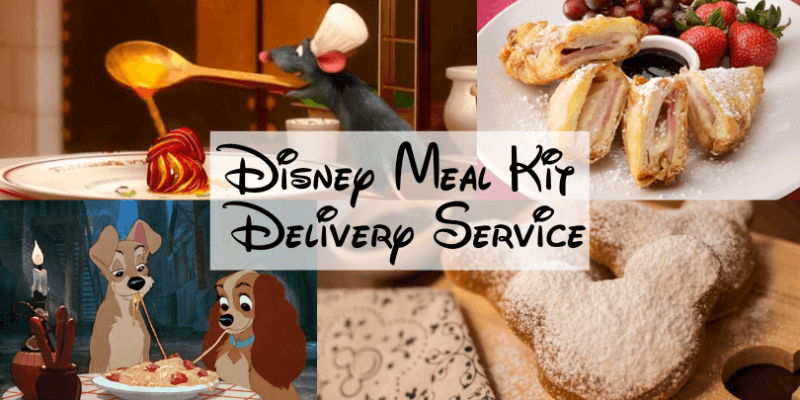 Disney has recently begun asking annual passholders if they would be interested in ordering Disney Parks food delivery from Disneyland Resort. And as we asked our readers what they think of the idea, a new notion was raised: Disney should create a themed meal kit delivery service.

Inside the Magic reader Amanda Banta suggested, “Honestly Disney needs to capitalize on the meal delivery subscription boxes. Family meals with Disney flair sent to your home to cook as a family. I’d sign up!”

Thinking about this a bit more, it could be a great idea. Following the lead of meal kit deliveries like HelloFresh, Blue Apron, and more, Disney could create an at-home meal kit that features iconic recipes from Disney movies, guest-favorite recipes from the Disney Parks, and more. Disney could allow users to choose a few different recipes to receive each week, specified to the appropriate serving size for their family. Each box can contain a few recipes with ingredients for each one.

Related: You Can Now Get a Monthly Disney Coffee Subscription

One Disney fan has been using TikTok to showcase her recreations of memorable Disney movie foods, from the spaghetti and meatballs from Lady and the Tramp to the mystery soup that Remy creates in Ratatouille. You can watch her video here — she definitely gave us some inspiration for recipes that Disney could include in a meal kit delivery service.

Here are some examples of recipes that Disney could include in the subscription:

…and so many more!

Disney has offered other subscription services in the past, from a Disney Princess subscription box to one appealing specifically to adults. While they have never offered a subscription box that allowed fans to recreate classic Disney dishes in their own homes — complete with ingredients and a recipe how-to guide — considering how successful other companies have been in this market, we can imagine that a Disney meal kit subscription box would be a hit.

So far, Disney hasn’t announced plans for a magical meal delivery kit, but we’ll let you know if anything is every announced. For now, we’ll be dreaming of all the recipes we hope to recreate at home.

Would you subscribe to a Disney meal delivery kit? Which Disney movie or Disney Parks recipes would you like to be able to recreate at home? Let us know in the comments!

Comments Off on Should Disney Create a Themed Meal Kit Delivery Service?