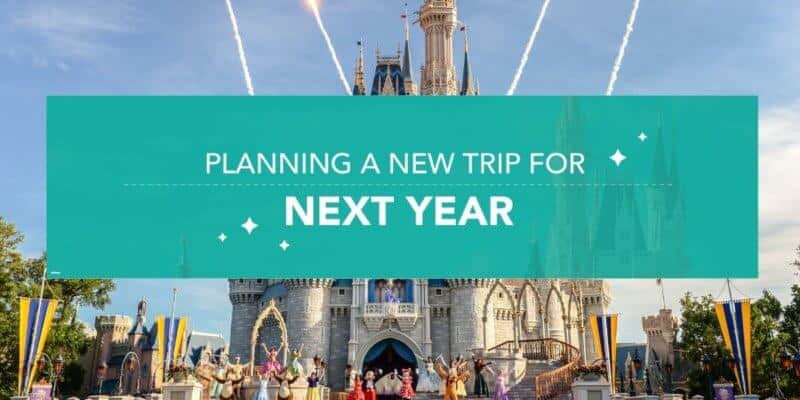 2021 is going to be a big year for Walt Disney World since they are celebrating their 50th anniversary! There will be special events, new attractions opening, and so much more. But when exactly can guests begin booking a Walt Disney World vacation package for 2021?

Well, Disney has just released information regarding 2021 packages and on June 28, all guests have been able to purchase new Disney World Resort hotel packages and theme park tickets for arrivals starting in 2021 — How exciting!

As you begin planning your upcoming visits, we’re also exploring engaging ways for guests to use their mobile tech to experience the magic – particularly now as the use of phones and apps continues to evolve. In 2021, we plan to unveil an innovative new offering as part of the My Disney Experience app that will bring features of a MagicBand to your smart devices, building on the app’s existing digital key feature. With this new offering on the horizon, we will be retiring our complimentary MagicBand distribution to Disney Resort hotel guests for new reservations with arrivals beginning Jan. 1, 2021. Disney Resort hotel guests will continue to have the option to purchase new MagicBands at a discount, and we’ll be introducing even more colors and designs featuring favorite Disney characters in the future. Guests who prefer not to purchase a discounted MagicBand will be able to use the My Disney Experience app or a Key to the World card during their visit. We will still offer MagicBands in retail locations and on shopDisney.com, and guests will be able to continue using the wearables throughout Walt Disney World Resort.

Along with this information, Disney World has released a Know Before You Go tutorial video which can be viewed below.

If you plan on visiting Walt Disney World Resort, there have been safety protocols and several other changes put into place to keep guests and cast members safe. Magic Kingdom and Disney’s Animal Kingdom reopened on July 11 and EPCOT and Disney’s Hollywood Studios reopened on July 15. All four theme parks have temperature screenings in place for Guests prior to entering the theme park. Disney Springs also has temperature screenings set up prior to entry being allowed.

Social distancing measures have been put in place, excessive cleanliness, encouragement of mobile orders, plexiglass, and as we previously mentioned, the elimination of character meet and greets. Also being eliminated from the parks are parades and fireworks along with other similar entertainment that draws a crowd, and much more.

We also reported that Disney announced that a lot of its upcoming events will be modified or canceled due to the current global pandemic. One of those event changes includes Mickey’s Not So Scary Halloween Party — an extremely popular event which occurs every year during the fall season — as well as monitoring to see how they should handle Mickey’s Very Merry Christmas Party –a yearly winter season event.

Another fall season event includes the EPCOT International Food and Wine Festival in which Disney has announced a modification to the popular event including a longer festival! You can read more about that here.

The Magic Kingdom at Walt Disney World opened on October 1, 1971, and has brought laughter, entertainment, and endless joy to families from all around the world. And in 2021, we will be celebrating Magic Kingdom’s 50th anniversary!

That’s right! Next year, we will be celebrating Magic Kingdom’s 50th anniversary, but we should all know by now that Disney doesn’t take milestones like this lightly. That is why WDW is bringing a party to all of its Disney theme parks, making this Walt Disney World’s biggest celebration yet!

From new attractions, like the newly opened Mickey and Minnie’s Runaway Railway ride and the upcoming Remy’s Ratatouille Adventure ride, to an entire reimagine Disney theme park — WDW isn’t holding back on any of the Disney Magic for 2021.

All four theme parks will be celebrating in style with highly anticipated attraction openings, brand new entertainment, food and beverage choices, special merchandise and more. We’ve decided to put together a complete guide to get you and your family ready for the party of a lifetime.

Do you plan on booking at Walt Disney World Vacation in 2021? Let us know in the comments below.