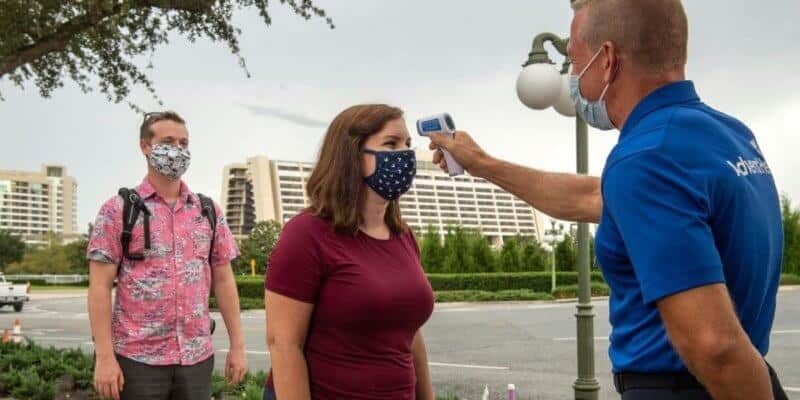 Walt Disney World is now implementing temperature screenings to more locations throughout property. Initially, the temperature checks were found at locations including entry to the theme parks and to the Disney Springs area.

However, now Disney has just updated their website to include temperature check screenings to table service restaurants at Disney Resort hotels.

Temperature checks are among the required health and safety protocol for all Guests and Cast Members.

Temperature screenings are required for entry to some locations.

You will be required to undergo a temperature screening with no-touch thermometers before entry to some locations at Walt Disney World Resort, including the Walt Disney World theme parks, the Disney Springs area and table-service restaurants at Disney Resort hotels.

Before you leave home, be sure to check the temperatures of everyone in your party—including yourself—as an extra layer of precaution.

If you plan on visiting Walt Disney World Resort, there have been safety protocols and several other changes put into place to keep guests and cast members safe. Magic Kingdom and Disney’s Animal Kingdom reopened on July 11 and EPCOT and Disney’s Hollywood Studios reopened on July 15. All four theme parks have temperature screenings in place for Guests prior to entering the theme park. Disney Springs also has temperature screenings set up prior to entry being allowed.

Social distancing measures have been put in place, excessive cleanliness, encouragement of mobile orders, plexiglass, and as we previously mentioned, the elimination of character meet and greets. Also being eliminated from the parks are parades and fireworks along with other similar entertainment that draws a crowd, and much more.

Are you visiting Disney World in the near future? How do you feel about the temperature screenings being implemented into table service restaurants.