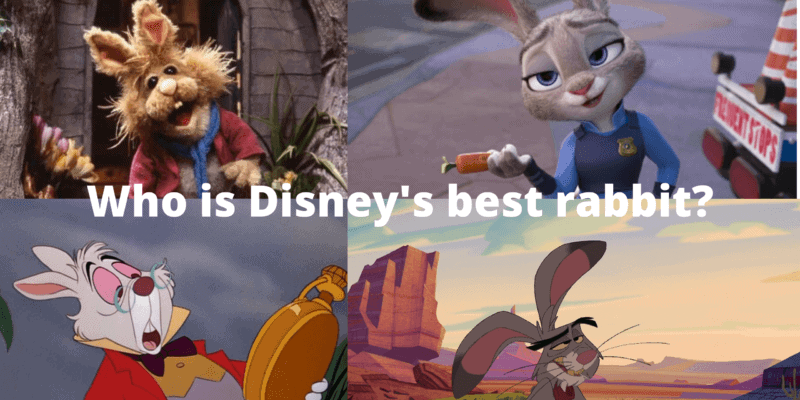 Over the years Disney has included a huge cast of rabbits across many productions from large films like Alice in Wonderland, Who Framed Roger Rabbit, and Bambi to smaller shows like Sofia the First. I thought it would be fun to rate Disney’s rabbits from worst to best, and while I haven’t included all of them, I’ve included quite a selection.
They’ve been ordered partially thanks to their impact on our lives and how recognizable they are in modern society.
Oh and before you say anything, there’s a reason why I didn’t include the March Hare in this list and the clue is in the name, he isn’t a rabbit. Sure, both rabbits and hares belong to the Leporidae family, but they sit firmly as separate species.
Let’s hop on over the list (I can’t promise that’s the last rabbit pun).

I promise this list will get more obvious characters as it goes on. Uncle Bun comes directly from the Disney Junior show, Sheriff Callie’s Wild West. He’s the bottom of the list simply because he’s most likely to be the one character on the list than most of you wouldn’t even recognize.

The exception to this is if you had a child obsessed with the show, which ran for just a couple of seasons from 2013-2017.

In the show, Uncle Bun ran a General Store and had aspirations of one day moving to the big city. Sounds very similar to a backstory of another rabbit on our list…

Taken from the Pixar short Presto that was released in 2008, Alec Azam is next on the list simply because although he was the star of his very own short, very few people actually know his name.

Alec was inspired by both Bugs Bunny and the classic magic phrases “abracadabra” and “alakazam.”

Clover will be recognized by many young readers and parents who have had to sit through hours of Sofia the First.

He serves as the pet rabbit for title character Sofia and has a very direct and to-the-point attitude. He’s able to communicate with Sofia through the Amulet of Avalor and works alongside his other animal friends to assist Sofia with everyday tasks so long as they call get fed in return. Seems like a fair deal to me!

Now I know there will be many of you out there that may not have heard of Mr. Whiskers before and may question why he sits ahead of some of the other characters on the list.

Mr. Whiskers was one of the stars of the early 2000s show, Brandy & Mr. Whiskers starring Kaley Cuoco, Charlie Adler and Tom Kenny (the voice of Spongebob Squarepants).

The show aired from 2004 to 2006 and given his name is in the title of the show, I thought he deserved a higher spot than some of the others on the list.

Francine “Fanny” Cottontail was the original love interest for Oswald the Lucky Rabbit, appearing in the early cartoons alongside the other lovable rabbit on our list. She originally appeared in the following 1927 cartoons:

Despite her amusing name, she was later reworked into Oswald’s sister (weird right?) before being retired entirely.

Of course, nowadays Oswald’s love interest is called Ortensia. I decided to include Fanny in the list over Ortensia simply because of the name, which is even funnier for those of you (like me) who reside in the UK.

StellaLou has a huge fanbase for fans of Disney’s theme parks in Asia. Originating in Tokyo DisneySea, her dream is to become a dancer/performer in New York.

She sits as part of the huge Duffy collection of characters that started with a simple bear and expanded out to include all types of different animals.

StellaLou is known for her Mickey Mouse marks on her face, paws and the back of her right ear.

Although not one of Disney’s most famous movies, Lucky Jack was one of the main characters from the 2004 movie, Home on the Range.

Unfortunately for Lucky Jack, he is only Lucky by name. In the movie, he gets set on fire, tortured and gets thorns in his foot.

Yeah, there’s a reason why not many Disney fans praise Home on the Range.

Though Skippy is one of several rabbits appearing in the 1973 animated version of Robin Hood, he is the one with the most screentime and the reason why he is the only family member to appear on this list.

His 7th birthday almost gets ruined by the awful Sheriff of Nottingham before Robin Hood comes in to bring a bit of light to the day by awarding him with his very own bow and arrow.

He then proceeds to act like Robin Hood while playing with some of the other animal kids from the movie and receives a kiss from Maid Marian herself.

Played by the wonderful Ginnifer Goodwin, Judy Hopps is one of the main stars of Zootopia. She sends an incredible message out throughout the movie, proving that no matter how small you are, you should always reach out and try to achieve your dreams.

Here’s a quote from the bunny herself:

So why isn’t she higher on the list? Well, she made it into the top 10 and there are some big rabbits still to come on the list!

Though there are many reasons to question the events of the original film starring Br’er Rabbit, Song of the South, nobody can deny the impact the character has had on millions who have ridden Splash Mountain over the years.

His place in the top 10 is deserved simply due to the number of people who see his face on a daily basis (when the parks are open of course).

Though many Winnie the Pooh fans agree that Rabbit is the most irritating character of the franchise, without him the inhabitants of the Hundred Acre Wood would be lost.

He is often the appointed leader in the time of need and I think we will all agree that having your house raided by Pooh and being pounced upon by Tigger constantly would result in us all being a little like Rabbit!

He’s been on our screens since the ’60s and inside our stories since way before that and for that he deserves a place in the top 10.

Related: Interesting facts you may not know about Winnie the Pooh

Despite being universally disliked by many of the original Muppet performers (he’s tricky to perform), Bean Bunny is one of the most beloved characters within the Muppets and has a huge role within Muppet*Vision 3D at Disney’s Hollywood Studios.

He also has a great supporting role in one of the best Muppet movies ever created, The Muppets Christmas Carol.

Thumper was instrumental to the success of the 1942 classic, Bambi. In the past, Disney has gone on record to state that it was Thumper that moved them away from the serious tones of the originally planned movie in order to add a bit more heart to the film.

Thumper is mischievous but is able to teach Bambi all the basics including how to walk and talk. Thumper is a rabbit the entire world recognizes and to not include him in the top 5 would be an insult to the legacy he has left at Disney and the world.

The White Rabbit from Alice in Wonderland is perhaps not as likable as many of the other entries that sit above him on this list, but nobody can deny the cultural impact the character has had.

Sitting across multiple Disney versions of the retelling of Alice in Wonderland, he’s instantly recognizable for constantly looking at his watch and his famous line:

While his personality is a bit scatty, he’s almost certainly one of the only inhabitants of Wonderland that has his mind in the right place.

Without White Rabbit, Alice would never have begun her adventures in the first place!

Roger Rabbit is fully deserving of his number two spot on the list, thanks largely to the fact he managed to bring so many characters from different studios together.

He was arguably the biggest cartoon star of the late ’80s and early ’90s, starring in the famous feature-length movie as well as several shorts.

The fact that we never got a sequel to this movie really is a tragedy!

Without the rise and fall of Oswald the Lucky Rabbit for Walt Disney there is no way the world would have ever seen Mickey Mouse.

After a dismal business meeting didn’t go the way Disney wanted, he famously came up with the basic idea for Mickey Mouse on a train ride back home from New York.

Originally created for Universal Pictures back in 1927, Oswald the Lucky Rabbit was acquired back by the Walt Disney Company back in 2006 and he’s been a part of the family again since.

In recent times Oswald the Lucky Rabbit has been a popular character to meet at Disney’s theme parks, as well as appearing in video games and Mickey Mouse shorts.

An Oswald series is also due to be arriving on Disney+ in the near future!

What is your favorite Disney rabbit? Let us know in the comments below if you agree with this list!