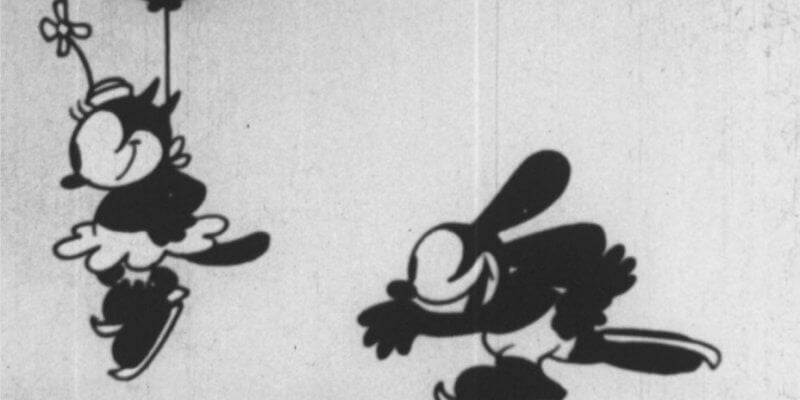 It may be Mickey’s 90th birthday this weekend, but his predecessor Oswald the Lucky Rabbit is also in the spotlight this week. A 1928 Walt Disney cartoon featuring Oswald, thought to be lost forever, has been discovered in Japan.

The 16mm copy of “Neck ‘n’ Neck” was in the possession of anime historian Yasushi Watanabe, who purchased the cartoon for about $4.40 when he was in high school almost 70 years ago. Watanabe bought the film at a toy wholesaler near his home in Osaka, where it was labeled “Mickey Manga Spide.” He didn’t realize the significance of the cartoon until recently when he read “Oswald the Lucky Rabbit: The Search for the Lost Disney Cartoons” by David Bossert, a longtime Disney animator.

The original runtime of “Neck ‘n’ Neck” was five minutes, but it was cut down to two minutes for the 16mm release. In the short, Oswald and Ortensia (“Sadie”) are out for a ride in his car when they’re pursued by a dog policeman. During the chase, the vehicles comically stretch and contract around steep turns.

Watanabe’s copy is currently being held at Kobe Planet Film Archive, one of the largest private film collections in Japan. “”As I’ve been a Disney fan for many years, I’m happy that I was able to play a role,” Watanabe, 84, told the Asahi Shimbun newspaper.

According to the Telegraph, Bossert called the find “very exciting” and hopes to screen the film in Los Angeles for a group of animation scholars. Becky Cline, director of the Walt Disney Archives, said, “We are absolutely delighted to learn that a copy of the lost film exists.”

Another lost film from the Oswald collection, “Sleigh Bells,” was discovered in 2015 at the British Film Institute’s National Archives by a researcher. The film was restored and its world premiere was hosted by Walt Disney Animation Studios at BFI Southbank in December 2015. Over the years, a few other previously-lost cartoons in the series have been rediscovered.

Walt Disney and Ub Iwerks created the character of Oswald the Lucky Rabbit in 1927, with a series of cartoons distributed by Universal Studios through 1928. Due to a contract dispute with Disney’s distributor, Charles Mintz, Disney lost control of the character in 1928. The experience inspired him to create a brand-new character: Mickey Mouse. This time, Disney retained the rights to his creation.

In 2006, Disney CEO Bob Iger made a trade with NBC Universal and regained control of the Oswald character. In exchange for minor assets, including the rights to the lucky rabbit, Disney allowed sportscaster Al Michaels to move from Disney-owned ABC and ESPN to NBC Sports. Seventy-nine years after Oswald was created, The Walt Disney Company now owned the rights to the character and the original 26 short films made by Walt Disney.

Comments Off on One of Disney’s lost Oswald cartoons, “Neck ‘n’ Neck,” discovered in Japan