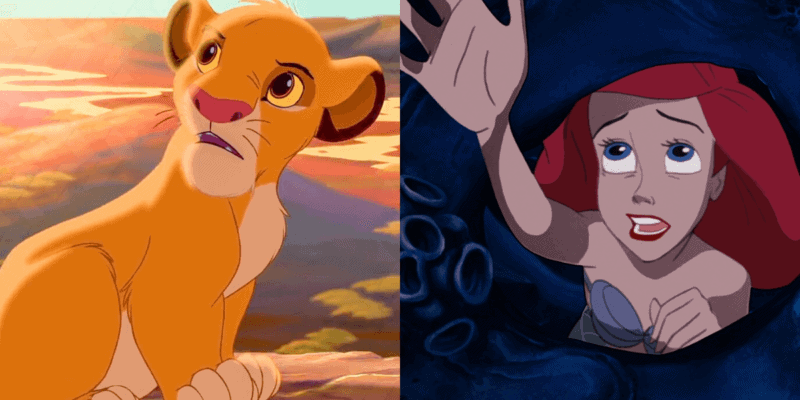 Imagine The Little Mermaid without “Part of Your World.” In fact, imagine Disney without The Little Mermaid at all. Imagine an animation department stripped down and forced off the Burbank lot with its foot glued to the accelerator churning out one feature-length movie a year with more “modern” and “adult” humor. That is just a quick glimpse of what the Disney Renaissance could have looked like if Jeffrey Katzenberg had his way.

Taking over in the late ’80s, Katzenberg was called to reign in Walt Disney Animation which was far too overbudget on The Black Cauldron. While he did help make a more efficient animation department, green-lighted films from The Great Mouse Detective and Oliver & Company to Pocahontas and The Lion King and brought Howard Ashman and Alan Menken to Disney, some of the biggest moments of Disney’s Renaissance happened in spite of Katzenberg.

This battle between the animators and Katzenberg is discussed fully in the documentary Waking Sleeping Beauty and is available for streaming on Disney+. But here are four of the best moments in Disney animation that happened in spite of Katzenberg’s opinion.

When Disney animators pitched The Little Mermaid, Katzenberg rejected it. Among other reasons, it was because it seemed too similar to Disney’s live-action movie Splash. The pitch was reworked and he went along with it, only to then come up against co-directors Ron Clemens and John Musker as well as the songwriters, Alan Menken and Howard Ashman, because he wanted them to cut “Part of Your World.”

As we know, he lost again. The Little Mermaid became a hit, “Part of Your World” is one of the most beloved songs from the soundtrack and the Disney Renaissance was well underway. And it was all in spite of Jeffrey Katzenberg.

2. The New Animation Studio on the Burbank Lot

Leading by the quote “I’m not interested in the Academy Awards. I’m interested in the Bank of America awards,” Katzenberg wanted to make the animation department as profitable as possible. His drive to achieve that apex would lead him to kick the entire animation department off the Burbank lot and into a building near Imagineering which animator Mike Gabriel described as “a gutted wretch of a building.”

On top of the downsize, Katzenberg was also determined to get the most out of his animators promising one feature-length film a year at the press junket for Oliver & Company. Animator Glen Keane described the department as “being driven by a maniac at the wheel with his foot on the accelerator, driving full speed in a very crowded city.”

But then-CEO Michael Eisner and Roy E. Disney, Walt’s nephew, held an appreciation for the Walt Disney Animation Department. At the Cast and Crew screening of Beauty and the Beast, Eisner and Roy announced plans to build a state-of-the-art facility back on the Burbank lot. Katzenberg was kept completely out of the loop.

3. Pocahontas vs. The Lion King

There came a point when it was decided that Disney would produce two animated movies simultaneously: Pocahontas and The Lion King. While both movies would go on to achieve success, Pocahontas was Katzenberg’s favorite, and he placed most of the studio’s focus there (an estimated $10 million worth of extra focus) while The Lion King was seen as the second-team underdog.

Despite the uphill battle, The Lion King would go on to be labeled one of the best-animated feature films of all time and the highest-grossing animated film ever at that time while Pocahontas underperformed and was almost instantly flagged for its racism and very skewed telling of American history.

Throughout his entire tenure at Disney, Katzenberg constantly tried to push more “modern” and “adult” characters and an overall departure from the G-rated clean content of a traditional Disney musical. When it came time for Toy Story, Katzenberg pushed Pixar to create a movie that was exactly that, and he would push them too far.

Following his direction, Pixar held a screening in November 1993 known as “Black Friday” where among other things, Woody was portrayed as a complete jerk going as far as to intentionally throw Buzz out the window. The reaction in the screening was so bad that the film was temporarily shut down. Toy Story was then reworked with nicer characters and became an instant hit.

These are just four points that prove that while Katzenberg received a lot of credit for the success of the Disney Renaissance, the real credit goes to the animators and filmmakers. According to Collider, a writer for the Wall Street Journal wrote, “Prominent in the Disney formula is Mr. Katzenberg, who, if not exactly the reincarnation of Walt Disney, brings his own blend of passion and obsession to Disney’s mission of creating animated classics.”

But these four points help show that it is the animators, musicians and directors in the trenches who were able to standby the decisions, turn stories around, and fight with determination to create masterpieces that will live on as a part of cinematic history that deserve the real credit for the Disney Renaissance.