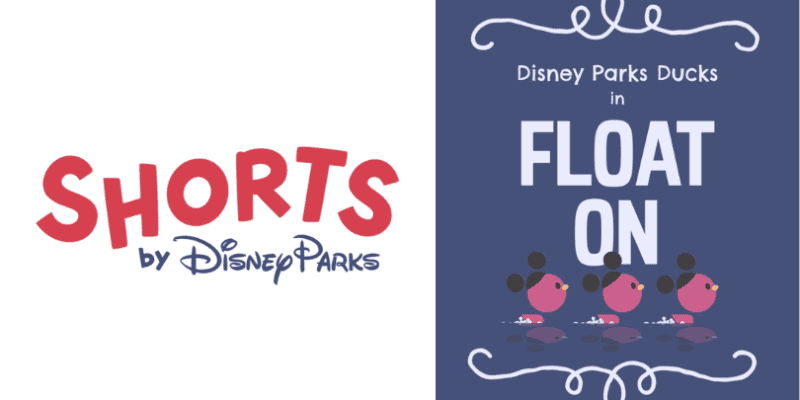 Just a little bit ago, we got the cutest notification of the day.  The Disneyland Resort and Walt Disney World have been sending out some magic to people who have the Disney parks apps notifications on.  I was wondering why I was getting a notification from my Disneyland Resort app — especially with ducks and a castle on it. They are releasing Shorts by Disney Parks with the first animated short being called, Float On!

Shorts in the Disneyland and Disney World Apps

These shorts are a really cute idea to give you some Disney Parks feels for some at home vacation fun.  You can find the animated shorts in the Disneyland app Walt Disney World My Disney Experience app right on the homepage. As you can see they’re doing Disney Parks recipes, like Dole Whip, too!

The notification said, “Follow a trio of ducklings as they float into an animated Disney Parks adventure.”  Upon receiving it, I thought, oh maybe they are doing something more like the original Mary Poppins with a little bit of animation with the real life ducks. When you get to the app, you see that the short is fully animated. It is super adorable accompanied by childlike music that you’ll be bobbing your head to with a smile on your face.

The little ducklings are floating in what seems to be a river passing by iconic Disney Parks attractions.  With little Mickey ears hats on their heads, they start off by Sleeping Beauty Castle working their way towards Jungle Cruise, Pirates of the Caribbean, Splash Mountain, and finishing up back at the castle with the sun setting.

The short is in the form of like an Instagram story where you can click on the left and right side of the screen to go forward and backward in the short which you will catch yourself watching over and over again already.  Ending the short is a message that Disney has put in saying to stop by the app for more shorts so we are excited for more to come.

Maybe Disney Parks around the world?  We sure hope so.  Which Disney theme park will they go to next?  Cinderella’s Castle?  Animal Kingdom, Star Wars: Galaxy’s Edge, EPCOT, or Hollywood Studios? What about a FastPass for a ride, a roller coaster, snacks, or photo op with characters?  The possibilities are endless and we are here for it!  Until then, we will be waiting in the virtual queues!

Comments Off on Shorts by Disney Parks Coming to Disneyland and Disney World Apps!