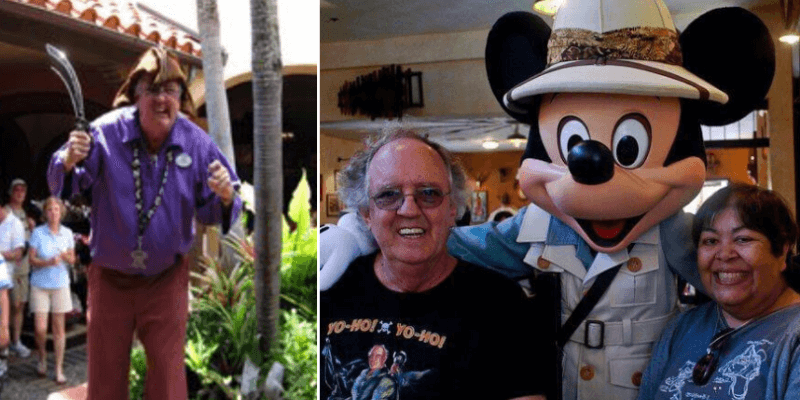 Before he retired, Bob Carlos was a Magic Kingdom Cast Member who was known as “Pirate Bob” in Adventureland in a merchandise location near the Pirates of the Caribbean attraction.

Bob’s wife, Bano, was also employed by Disney and worked at the Disney Reservations Call Center before she retired. The couple worked for The Walt Disney Company for two decades and loved calling Florida home, according to an article published by the Orlando Sentinel. Bob had dreamed of working for Disney ever since the first time he saw an animatronic move in 1976.

“They both were very, very proud to work at Disney,” Tracey Carlos, Bob and Bano’s daughter, said to the Orlando Sentinel. “That was their playground to go to the parks whenever they could.”

Bano died from COVID-19 ion March 30 at the age of 73. At the time of her passing, Bob was sick, as well. He passed away at the age of 75 less than a month after his wife. The two were married for over 50 years and had two children, Tracey and Rob.

Former CEO and current Executive Chairman of The Walt Disney Company offered his condolences to the Carlos family after it was announced that Bano had passed away.

This is very sad. My sincere condolences.

Many Disney fans loved visiting Pirate Bob in Adventureland during their days at the Most Magical Place on Earth, and many continued to post about their fond memories of him after finding out about his passing via social media.

“Pirate Bob was a legend. He was someone who truly embodied “the magic of Disney'” shared one fellow Disney Cast Member on Facebook.

Tracey Carlos had shared a heartfelt anecdote to Facebook before her father passed:

“Some of you who have been following the updates on my dad, Bob Carlos, might have seen references to him being a pirate and I decided to explain it as it is a wonderful story. My dad worked for Walt Disney World’s Magic Kingdom for a little over 20 years. It is where he retired from. About 10 years of that time he worked in the Pirates of the Caribbean gift shop. Dad has a booming voice and a slightly crooked nose. Some people can find that intimidating about him and he disliked that. One day Disney management put out a list of words that employees (known as cast members) could pepper their conversations with guests with to add to the pirate experience.

“Dad thought this was wonderful and started talking like a pirate from then on. He became a bit of a celebrity as he always stayed in character, sometimes even outside work! Kids around the world have photos with him and signatures from Pirate Bob in their character signature books. Upper management would bring their family to meet Pirate Bob when they went to the park. Dad has always been very proud of the legacy he created. When he retired, his manager created a Pirate Bob name tag for him which he has in a shadow box hanging on his wall. This is the only photo of him in character I could find. If others have some I would love for you to share them too. I am sure when he gets better he would love to have them.”

“How sweet! Just another reason we love Disney so much!!!” a fan replied to Tracey’s story.

We at Inside the Magic send our most heartfelt condolences to the Carlos family and Bob and Bano’s loved ones. We are keeping everyone affected by the current pandemic in our hearts.