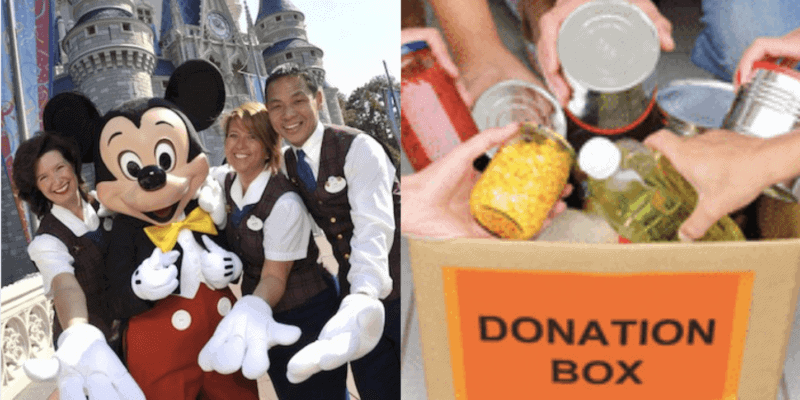 When Disney furloughed upwards of 100,000 workers on April 19, many were left facing uncertain circumstances. Disney World Cast Member Emily Lartigue, who has been employed at Walt Disney World Resort since 2013 and was part of the massive furlough, has decided to use her unexpected free time to spread some magic to her fellow Cast Members.

WKMG News 6 reports that Lartigue got the idea for starting a food pantry for furloughed Walt Disney World Cast Members in March. She began collecting non-perishable food items since then, so she had a large stock by the time the furloughs actually took effect.

As a matter of fact, Lartigue’s Cast Member food pantry has overtaken an entire storage unit, with products ranging from toiletries to canned vegetables to soup to snacks. Lartigue told Channel 6 News in Orlando, “To be able to give back to them and to help out our fellow cast is really special.”

In addition to receiving food donations, Lartigue has been the recipient of numerous monetary gifts from Florida locals who want to support the Disney Parks during their unexpected extended closure due to the current pandemic.

Lartigue shared how touched she has been, stating, “It really does give you chill bumps, you know? People have shown us an outpouring of donations, monetary donations, we hit $2,000 yesterday.”

The Disney Cast Member food pantry is open to any Cast Member who was furloughed amid the current pandemic. Lartigue is following CDC guidelines and said, “We are requiring appointments to be made. If you have a mask, if you have gloves, please wear them when you come.”

Lartigue wants her fellow furloughed Disney Cast Members to know that there is no shame in needing help during these trying times! She encouraged those in need to remember, “you are definitely not the only one out there who needs some help right now and that’s why we’re here, that’s why we were created, and you have fellow cast members that are going to have your back and we’re here to support you.”

The Disney Cast Member food pantry in Orlando is currently in need of breakfast items, such as boxed cereal and snack bars, pasta, and pasta sauce. To donate products or make a monetary donation, reach out to Emily Lartigue via Facebook or email castmemberpantry@gmail.com.

You can use these same avenues to schedule a food pantry appointment. Furloughed Disney World Cast Members can visit the food pantry from 11 a.m. to 1 p.m. and 5 p.m. to 7 p.m. Tuesday, Wednesday, and Thursday.

Disney theme parks and Disney resort properties around the world also got into the spirit of food donation, offering donations to food banks in their local areas. Excess food that would have gone back during each Disney Park and DVC closure have been given to worthy local organizations, including Aloha Harvest in Hawaii and Feeding Orange County in California.

What do you think of Disney’s various food donation offerings? We love to see Disney’s surplus food inventory go to good use!