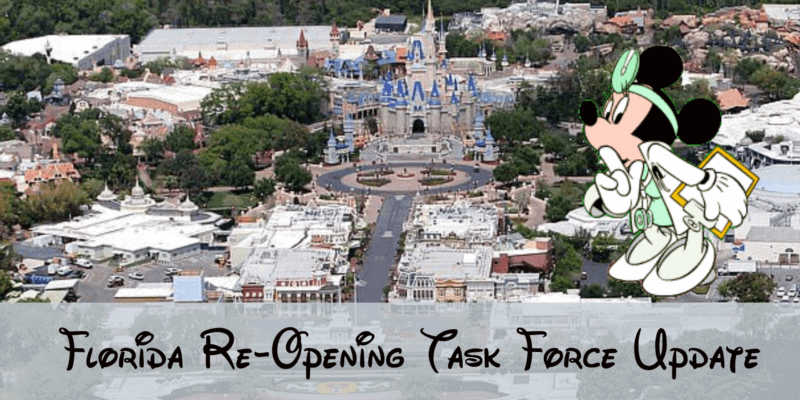 This week, Florida Governor Ron DeSantis held several meetings regarding protocols of re-opening Florida — alongside county commissioners and members of the Florida Task Force, and with Disney and Universal officials involved in the conversations, much of the discussion focused on theme parks, cruise lines, and other tourism (which mainly resides in Orange County).

It’s also a good idea to keep in mind that this week the task force presented the jobs at risk in the state of Florida. Since the state relies so heavily on tourism, it is not surprising that Accommodation & Food (Tourism) and Retail are the top two categories of vulnerable jobs. There has also been speculation, for example, that once the theme parks re-open, they will do so with a reduced percentage of workers, although nothing is for certain.

Get caught up on Florida’s gradual reopening of tourism by reading our previous update here.

Let’s take a closer look at how the task force’s strategies and goals can apply to the Orange County tourism — Specifically, Walt Disney World Resort, Universal Orlando Resort, and Disney Cruise Line, as well as any new information we have now regarding their reopening.

The task force provided updates regarding how hotels and restaurants will need to approach reopening mid the current pandemic. Universal Orlando Resort and Walt Disney World Resort both encompass restaurants and hotels which these new health and safety guidelines will apply to.

Restaurants will be required to adjust their operations such as thoroughly cleaning and sanitizing all areas of restaurants and bars, and making hand sanitizer readily available to guests. They will have to update their floor plans for social distancing and not allow guests to congregate in waiting areas or bars. And taking employee’s temperatures will not be required, but it will be at the business operator’s discretion.

When it comes to hotels, motels, and lodging in Florida, proper and more frequent cleaning and sanitation must occur, including additional frequent cleaning of common areas. Signs encouraging social distancing will be posted, and businesses will provide hand sanitizers and wipes in any location deemed appropriate. Hotels are also encouraged to eliminate or reduce in-person check-in and check-out and instead utilize contactless check-in and check-out processes. If you are a frequent Disney World guest, for example, this will remind you of online check-in at your Disney Resort hotel, which has been available on the My Disney Experience app for the past couple of years.

It was also emphasized that even when restaurants, hotels, and other businesses reopen, it could take at least 2-4 weeks for them to start seeing success. So for example, if a restaurant reopens on May 4, it could take until the end of the month for the restaurant to even start to be back to somewhat normal operations.

Santiago Corrada, the CEO of Visit Tampa Bay, made recommendations for large group gatherings — especially in places like convention centers — which could easily be followed by places like theme parks and airports. Some of the key takeaways from Corrada’s recommendations include enforcing a sanitized environment prior to opening, considering square footage per attendee to encourage social distancing, implementing biometric testing prior to admission to some of these events and conventions, and adhering to specific guidelines and checklists for being able to get back to business. He also emphasized that as restrictions are loosened, that should also be communicated, and as situations change, then guidelines need to change.

As far as how this will affect Disney and Universal theme parks, that has not yet been made clear. But it was noted that members of the task force believe that consistency within the state of Florida should be a priority. They said that when convention centers, sports venues, and of course theme parks are approaching reopening, they should keep their policies consistent and follow the same guidelines across the state. This could mean that we will see the same health and safety procedures at Disney World and Universal.

The CEO of Universal Orlando Resort and the Vice President of Universal Parks and Resorts is also a member of DeSantis’s task force, and earlier this week he shared an update that many were taken aback by. He said that amid the current pandemic, the resort currently has no timeline for reopening.

“We’re not sure yet how we’re going to do that, but we’re looking for help from health officials to help us figure out what might be an appropriate protocol to try to minimize the possibility of any sick guests entering the parks,” he explained. Like the U.S. Disney Parks, Universal Orlando Resort has been closed since mid-March.

MSC Cruises, for example, is considering implementing things like temperature checks for all passengers, the use of questionnaires to find out where passengers have traveled previously and denying boarding to anyone who poses health concerns. We saw similar policies being heavily implemented for Disney Cruise Line vacations in the days and weeks before Disney cruises were temporarily suspended, so we wouldn’t be surprised if Disney continued to implement such policies, or if even more serious health screenings were to take place.

Gov. DeSantis opened the call on Monday, April 20, 2020 by reassuring the listeners that Florida is doing much better than anyone anticipated. During the Q&A portion of the call, Gov. DeSantis shared how the testing efforts are being considered within the tourism industry. However, the concern with major corporations, like hotel chains, are testing guests who could produce false-positive test results, endangering the health and safety of others.

Disney and Universal have yet to share any official information about a re-opening date.

We will continue to keep you informed as we learn more about this developing story. Be sure to check back with us here at Inside the Magic for the latest Disney news and pixie-dusted content, and make sure you sign up for our newsletter below so you can get the most up-to-date information straight to your inbox. See ya real soon!