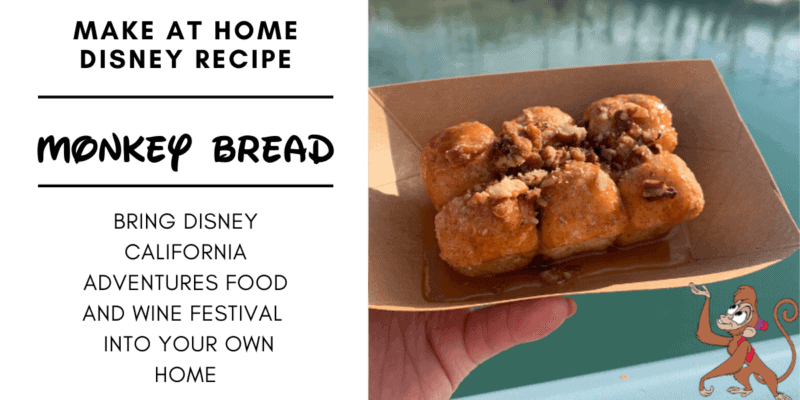 Welcome back! If you’re just beginning our Disney California Adventure Wine and Food Festival Tour, don’t worry! We have quite a few more stops so it’s still a good time to join. You can always catch up on our previous stops down below. This post is all about the Monkey Bread at one of our favorite booths, LA Style!

This is a super fun booth. It’s a good representation of what the LA (Los Angeles) County cuisine is. There is a lot of diversity which births a lot of creativity and blending of culinary delights. Hence, a lot of fusion food, just like this booth!

Cinnamon is a flavor that shows up in some of Disney parks most famous sweet treats. At Disneyland, you churros here, there, and everywhere! At Walt Disney World, them have Gaston’s Famous Cinnamon Rolls. Disney California Adventure is bringing it to you in the form of Monkey Bread!

This recipe is a simpler version of Monkey Bread because sometimes we just can’t wait that long to have the goodies! If you’ve got kiddies, you can leave out the whisky glaze, it does add a tiny bit of a bitter note.

Joffrey’s recently released some fun at-home coffee recipes you can enjoy. This Amaretto Stout-Cream Cold Brew definitely had a kick to it from the coffee and the booze!

Join us at the first stop in the second half of our Disney California Adventure Food & Wine Festival tour, Avocado Time! Abu is coming along with us through the Festival Marketplace!