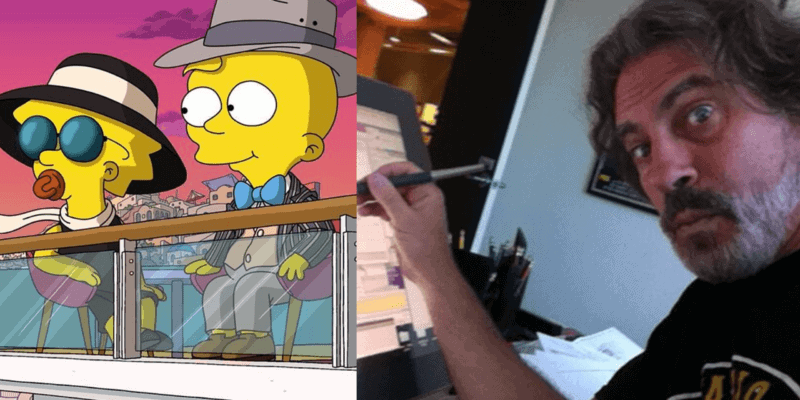 As a huge fan of The Simpsons, I had the pleasure of being part of a roundtable discussion with longtime Simpsons director and animator David Silverman. In fact, it was one of his early episodes, “Bart vs Thanksgiving,” that made me fall in love with the show all those years ago. David sat down to discuss his recent work on the short “Playdate with Destiny” and I made sure to ask him one of the biggest questions fans have: How do the writers seem to predict the future?

Ryan, Inside the Magic (ITM): I noticed a lot of subtle visual gags in the short, something The Simpsons is obviously famous for. How do these come about in the writing process?

David Silverman: In this particular version, a lot of it was pitched out, I really think it’s to do with pitching back and forth. One thing leads to another. Maggie is preparing for the date and holding up the diapers and I came up with the idea of the milk behind the ears and that kind of thing happens and builds out from there. We’ll try and get it storyboarded and watched on a reel and add things from there.

Originally when Maggie gets away from Homer, she sits in place of the slide like she did at the start of the short but we decided to keep it moving and have it so that she sees him as she pulls up in the car.

ITM: What’s been your favorite celebrity to come on the show over the years and related to that, what celebrity would you like to make an appearance in a future episode?

Silverman:  I really enjoyed Johnny Cash, he was a great choice as a Space Coyote and did a marvelous job and so glad that we got him.

I just got a great kick meeting Elizabeth Taylor years ago, it was great to meet such an iconic person.

A far as someone in the future, we have a few coming on and I wouldn’t want to leave someone out by not mentioning them!

ITM: Given the number of times the show has predicted the future correctly and it’s all we see fans talk about online, what’s the secret?

Silverman: The secret is that we travel through time [laughter].

Well to give an example, Trump was running for president back in 2000 when we did that joke, but we had no idea he would actually become President!  The thing that baffles us is that most of the writers are pretty big sports fans and some of the predictions we’ve gotten right have baffled us all!

Perhaps you could say a lot of them were suggestions that people took onboard afterwards, such as Disney purchasing Fox [laughter].

ITM: Well, I guess that one worked out for everyone!

Question: What were the origins and inspiration for the short?

David: We wanted to do something to say well we’re part of Disney and we eventually settled on a short that we came up with alongside Matt Groening. Maggie is all silent so it’s a great and fun thing to do in a short format. We all sat down together and brainstormed the ideas and came up with the park idea and using Maggie.

Question:  Disney+ is going to be updating the aspect ratio for the first 19 seasons. Can you talk about why it’s important?

David:  The shots were originally designed with that in mind, when it’s cut off it makes certain shots lack information likes tops of heads, eyes and in worst cases, jokes. This was how the show was first presented so I want to see it that way. I wouldn’t want to see Snow White or Pinocchio in the wrong aspect ratio.

Question: Are there any hidden Mickeys in the short?

David: Not this time around, though it would have been nice!

Question: Did you decide to release the short alongside Onward?

David: I didn’t have much to do with that but as you know I worked on Monsters, Inc., so I was just really pleased to be working for Disney again. It’s a great film to be a part of, I really love Onward. We hadn’t seen it when we were making the short but the two seemed to be very emotionally connected.

Question:  Do you see any changes to The Simpsons now you’re part of Disney?

David:  It’s business as usual. Disney is great with saying this is a working property and if it ain’t broke we aren’t gonna try and fix it, just like they’ve done with Marvel and other properties! It’s been great, no change whatsoever!

Question: What are you watching on Disney+?

David: I just watched 101 Dalmatians and I counted them all, there really are 101! It’s one of my very favourite animated Disney films.

David: This is very hard, I love Homer, Marge, Bart, and the entire gang but Homer and Krusty are great to work with and obviously they have similar designs. Both are performed by Dan and there’s some great fun animation which I’ve had a great time working on. I have a fondness for Professor Frink who has a fun design and the Jerry Lewis voice that Hank gave to him on a whim is great.

It was a real pleasure talking to David Silverman who worked on classic episodes such as “Homer’s Triple Bypass,” “Krusty gets Kancelled,” “Bart the Genius,” and many famous Treehouse of Horror moments alongside directing The Simpsons Movie. You can catch the Simpsons short, “Playdate with Destiny” on Disney+ starting April 10th, alongside 30 seasons of the show and the movie!