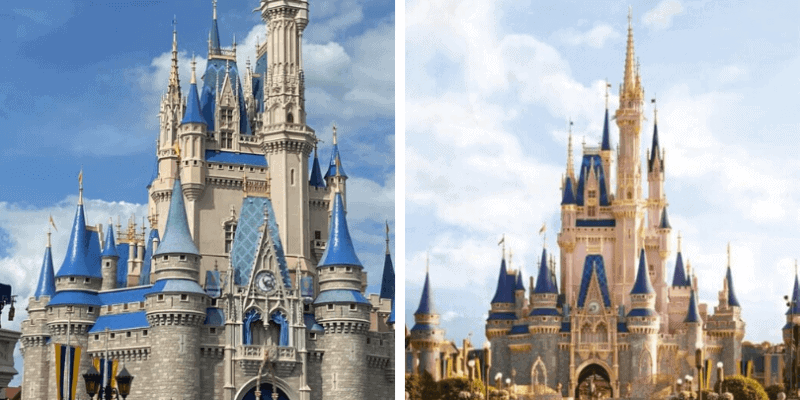 “As you can see, there are no cranes on me!” -Cinderella Castle

The Magic Kingdom’s iconic centerpiece is well into its “Royal Makeover” but as you can see there are no cranes or barricades.

These pictures are brought to us by Inside the Magic’s own Kelley Coffey as she enjoyed her day exploring Walt Disney World. The cranes that were there at the official start are gone and a large portion of the paint job is already complete. We can see that the paint job–so far–is just a boldening of the pre-existing colors. The blue spires and the gray stone walls.

Here is the concept art Disney released of what the castle will look like once completed.

As we can see, the rose-pink dusting has not been completed yet, nor has the gold trimming been installed. But we have to give Disney credit for their attempts at keeping the views of Cinderella’s Castle unobstructed. Every year before and after Christmas time, die-hard Disney fans call the Magic Kingdom the “Magic Crane-dom” because the massive crane used to install and remove the Christmas lights on the Castle remains in place for days on end. It appears Walt Disney World is looking to avoid that. However, we would be silly not to expect the cranes to return. There’s a good chance the multitude of cranes will return for several consecutive days, especially as the gold trim is installed.

But guests should take the absence of cranes as a reassurance that the castle will remain as open as promised through this time of refurbishment. The beloved character dining restaurant, Cinderella’s Royal Table, as well as the Bibbidi Bobbidi Boutique are still open for business.

Related: Changing of the Guard: Bob Iger and Bob Chapek to take part in Ceremony at Cinderella Castle

Does the sight of Cinderella Castle make you crave a visit to the Magic Kingdom as much as is makes us? If so, our friends at Academy Travel are ready to help you out. Backed with years of experience, Academy’s travel agents know what it takes to get you the best possible deal on your Walt Disney World Vacation whether your destination is the Magic Kingdom or EPCOT or any of the other theme parks. Click here to learn more and receive your free, no-obligation quote today!

What do you think about the “Royal Makeover” going on at Cinderella Castle? Are you excited to see the result? Let us know in the comments!