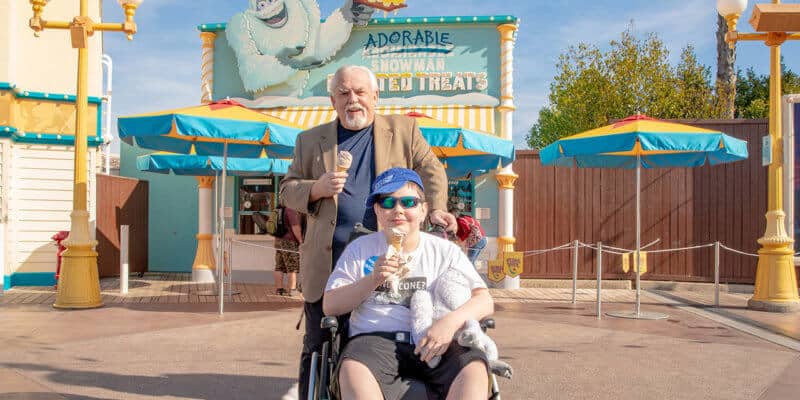 This story will warm your heart.

Twelve-year-old Spencer got to do just that at Pixar Pier at Disneyland on January 28. Spencer and his family are from Maryland and visited the Disneyland Resort, thanks to the generosity and caring people at Disney and the Make-A-Wish Foundation. Spencer’s big wish was to meet actor John Ratzenberger, who lends his voice to characters in lots of Disney-Pixar films, including A Bug’s Life, Monsters, Inc., Toy Story films, Finding Nemo, The Incredibles and The Incredibles 2, Coco, Up, Inside Out, The Good Dinosaur, and Brave. In fact, the voice actor has played a role in every animated Disney-Pixar film made.

Spencer has wanted to meet the actor for some time, explaining that Ratzenberger is his hero, that “he’s funny and he sounds like such a nice guy.” Spencer went on to say “I feel happy when I watch him.”

Ratzenberger’s most notable role pre-Pixar was that of Cliff Clavin on the American television sitcom Cheers. He played his role alongside actors like Kirstie Alley and Ted Danson. Since Cheers ended, Ratzenberger is best known for his voice talents in movies from Pixar Animation Studios. He played the voice of Mack, the driver for Lightning McQueen, in Cars, Hamm in the Toy Story franchise and Spencer’s favorite character, the Abominable Snowman from Monsters, Inc.

Spencer brought along one of his favorite plush animals to enjoy the fun with him. Well, a plush creature, anyway; he has his very own plush Abominable Snowman from Disney/Pixar’s Monsters, Inc. Spencer says the Abominable is his favorite character of all those who share Ratzenberger’s voice.

After meeting Ratzenberger, Spencer couldn’t contain his happiness. “I just can’t believe it,” the twelve-year-old fan said. “I sure did enjoy being with him, and he called me a friend. Being his friend is so nice, and [meeting him] made my heart shine brighter than ever!”

Spencer is just one of the tens of thousands of children whose dreams have become reality, thanks to the Make-A-Wish Foundation and Disney. In 2019 alone, Disneyland Resort was the place where nearly 700 wishes were granted for children with serious or life-threatening illnesses and medical conditions.

Do you know someone whose wish was granted by Disney and the Make-A-Wish Foundation?