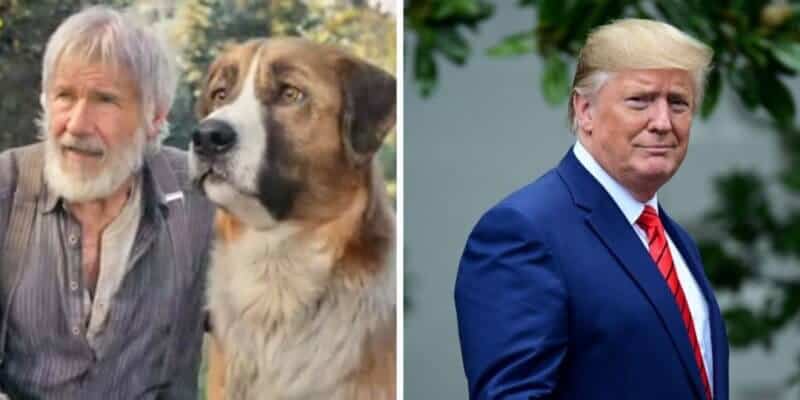 American actor, Harrison Ford, recently made an appearance on Jimmy Kimmel Live! in order to promote his upcoming Disney film, The Call of the Wild.

But while on the late night show Monday, it wasn’t all about Ford’s upcoming Disney film. In fact, Star Wars actor Ford and Jimmy Kimmel ended up on the topic of President Donald Trump.

During the interview with Ford, Jimmy Kimmel held up a fake poster that showed off fake reviews for The Call of the Wild, which some of were focused around President Donald Trump.

One of the fake reviews read “It was a perfect call,” which, in case you aren’t aware, references to how President Donald Trump describes his phone call last summer with the Ukrainian President Volodymyr Zelensky. The same call which sparked the Democrats’ impeachment campaign.

So how exactly did Ford respond to this? Well, let’s just say the actor did not hold back. “That’s the first thing that son of a b*tch has done for me — ever,” Ford said.

You can watch Harrison Ford appear on Jimmy Kimmel Live! below:

This isn’t the first time that Star Wars actor, Harrison Ford, has had something to say about America. In fact, the actor came at America while he was in Mexico City promoting the new Disney film.

“Our position in the world is tenuous because of our lack of moral leadership, basically,” Ford said. “I certainly applaud Greta [Thunberg]… her activism, her role in representing the interests of young people, and I admire her courage, her fortitude, and also admire her capacity to express herself.”

Ford continued, “Science is being ridiculed by people in ideological campgrounds. They are refusing the wisdom, the discipline of science, in favor of a political point of view. And that has to stop. And I believe young people throughout the world know that it has to stop and are capable and willing to make the sacrifices to make that happen.”

Harrison Ford has been in a wide variety of movies including portraying Han Solo in the Star Wars franchise and Indiana Jones. Ford is also an environmental activist and in 2019, Ford gave a speech on behalf of Conservation International during the United Nations’ Climate Action Summit in New York. The speech revolved around the destruction of the Amazon rainforest as well as how it has affected climate change for the rest of the world.

Ford is also vice-chair of Conservation International, which is an American nonprofit environmental organization aimed to protect nature.

The Call of the Wild premieres in theaters on February 21, 2020. You can watch the trailer below:

Do you plan on seeing The Call of the Wild once it hits theaters? Let us know in the comments.