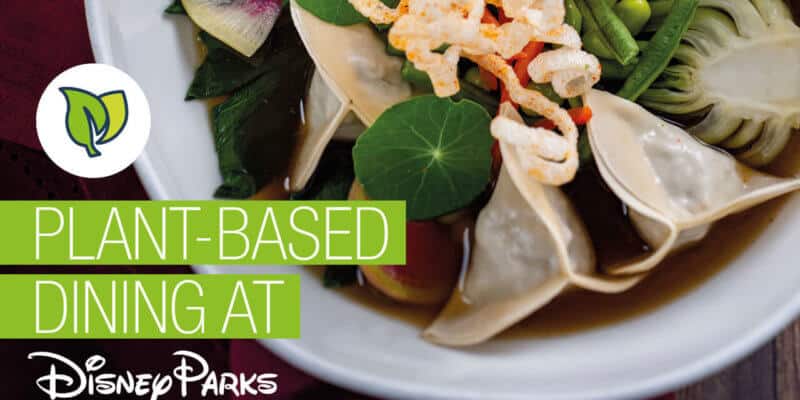 Last September, Disney Parks announced that they will be working on expanding vegan, vegetarian, and plant-based food across the theme parks.

This began in Walt Disney World Resort as Disney introduced hundreds of new vegan options and plant-based food to the theme parks. They also introduced a brand new vegan menu icon so Disney guests can now easily find the vegan options best suited for them. Ever since this announcement and the items began rolling out, Disney guests have been thrilled with choosing from hundreds of both sweet and savory dishes as well as enjoying several brand new plant-based meals.

And now, CNN is reporting a similar effort is currently underway on the West Coast at Disneyland Resort and is aiming to get its plant-based options finalized this spring.

But Disney does not want to limit these options to just “vegan”. They are planning on using the word “plant-based” as that seems not to only be the trend these days, but it seems to be more appealing to everyone.

“Most research shows that the word ‘vegan’ appeals to vegans but the trend is much broader than that,” said Cheryl Dolven, a manager for food and beverage health and wellness with Walt Disney World Resort Development, Optimization and Standardization. “‘Plant-based’ is much more broadly appealing.”

According to the Disney website, the company defines their “plant-based” options at the theme parks as “made without animal meat, dairy, eggs and honey.”

Dolven also touched upon the approach for younger guests, saying “The company is also trying to appeal to younger guests, the future of Disney, as well as its own cast members who adhere to plant-based diets.”

Though, whether you call these options “vegan” or “plant-based”, this is a smart marketing move as this trend is impacting the restaurant business throughout the United States. In fact, according to the Dining Alliance, a US industry group, “restaurant sales of alternative meat products jumped 268% last year.”

Behind The Scenes Of Creating Vegan Options And Plant-Based Meals

In order to provide delicious and nutritious options other than your typical hummus and carrots, Disney went above and beyond as they used their in-house Flavor Lab, which is a research and development facility, to not only create but taste test these new vegan and plant-based items.

Gary Jones, a culinary dietary specialist at Walt Disney World Resort, said “Chefs aren’t trained that way. A lot of us are going back and relearning how to extract the most flavor from plant-based choices.”

They even encouraged their chefs to take trips to vegan and plant-based restaurants in both New York and Philadelphia to conduct research and gather ideas and inspiration. This including looking and creating replacements for milk-based products such as mayonnaise, butter, yogurt, cheese and eggs.

Regardless if you are vegan, on a plant-based diet or neither, these new options will appeal to everyone! We cannot wait to try some of these new menu items once they launch in Disneyland Resort.

There are several vegan options at Magic Kingdom in Disney World. Disney guests could try the Pineapple Float at Aloha Isle or the Black Bean Chips with Hummus at Tortuga Tavern.

And if you are looking for a sit down meal, check out Jungle Navigation Co. LTD Skipper Canteen which offers Curried Vegetable Crew Stew or the Shiriki Noodle Salad.

But my personal favorite is the Lighthouse Sandwich at Columbia Harbour House, which consists of hummus, tomato, and broccoli slaw on whole-grain bread.

If you are looking to fuel up while visiting Docking Bay 7, the Star Wars themed eatery in Hollywood Studios, I highly reccomend the Felucian Garden Spread, which is plant-based “kefta meatballs,” herb hummus, tomato-cucumber relish, and pita.

Garden Grill is a sit down restaurant in Epcot perfect for those on a vegan or plant-based diet (or for those you are just looking to expand their palettes!)

Disney guests can start off with vegan rolls which are served with vegan butter, along with a fresh mixed salad. The main course consists of a vegan meatloaf topped with vegan cream sauce, rice, green beans, corn, and French fries.

If you still have room left, be sure to ask your server for the vegan dessert — a shortcake-type dessert which is topped with a delicious berry sauce and paired with fresh fruit.

Disney guests who are on a vegan or plant-based diet should visit Satu’li Canteen in Disney’s Animal Kingdom. Here you can create your very own bowl with items including chili-spiced crispy fried tofu, black beans and rice, hearty salad or potato hash, and charred onion vinaigrette.

Are you looking forward to these new plant-based options coming to Disneyland? Have you had the opportunity to try the plant-based items at Walt Disney World Resort? Let us know in the comments.