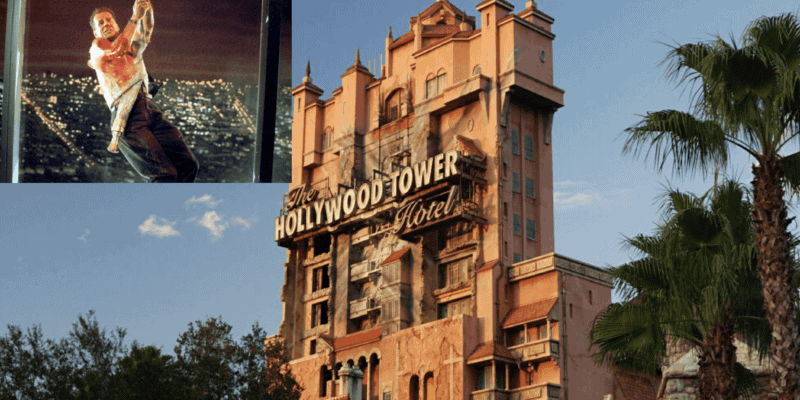 Okay, hear me out on this one for a second…

Disney acquired the Die Hard license when the Fox acquisition was completed last year and ever since a friend of mine mentioned the idea to me (thanks, Nic), I haven’t been able to get the idea of a Die Hard overlay out of my head.

I thought I would share just a few ways a Die Hard Tower of Terror takeover could work and include what could be included.

How the ride would work

Two words: Nakatomi Plaza. The Tower gets a complete overlay to look like the famous Fox building as it looked in the classic 1988 movie. As Guests, you walk into the building. You see the action unfold from the eyes of action hero John McClane. This enables Disney to retell the story without needing the original cast, using old footage for some of the background scenes.

You enter the building through the party when you discover something has gone wrong.

Hans Gruber and his group of European baddies have taken over the building. As chaos ensues, you are rushed towards the elevator as you hear gunfire going off in the background. The elevator lifts you into various scenes from the movie, including “shoot the glass,” the drop as the elevator shaft explodes, and of course, the ride culminates in Hans falling from the top of the Plaza.

You’ve done it; you saved the employees of the Nakatomi Corporation and are reunited with your wife, Holly. You’re a winner.

It’s been done before

Okay, so obviously, A Die Hard attraction hasn’t happened at the parks before, but we have seen other takeovers of Tower of Terror.

Related : Is Disney remaking the “Die Hard” franchise following the merger with Fox?

Diehard Disney Fans Call It Quits With the Parks

Guardians of the Galaxy have already taken over the Tower in Disney California Adventure, and there have been rumors that Disneyland Paris is next on the list.

Instead of putting the Guardians in every Tower of Terror location, why not another IP now owned by Disney?

Die Hard is one of the best movies ever made, period. It’s continually referenced in pop culture (Brooklyn 99, anyone?), and there have been strong rumors that Disney is looking to continue the franchise now that they have the rights.

The fact remains that the movie stays on the yearly rewatch list of many people around the world, even if you disagree that it is a Christmas movie (it is, by the way).

Right, you have the idea of Walt Disney Imagineering. I leave it in your capable hands! It would make one heck of a thrill ride that would get adult Disney fans flooding into that area of the Park and distracted from Star Wars!

What are your thoughts on a Die Hard takeover for Tower of Terror at Disney’s Hollywood Studios? Let us know in the comments below!