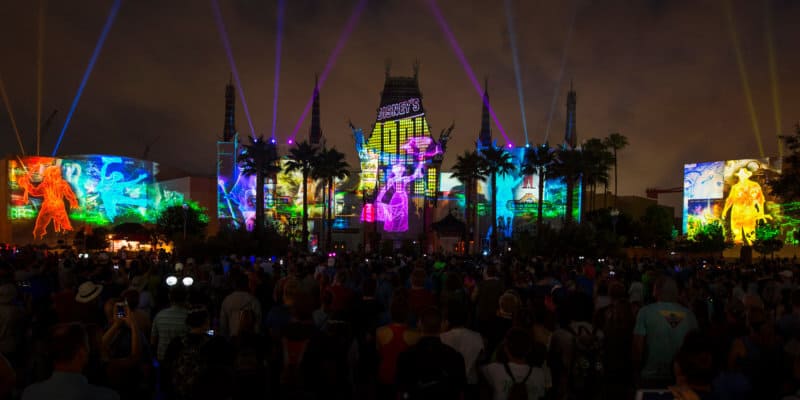 On March 13, 2020, Walt Disney World’s nighttime projection show, Disney Movie Magic, will return to Disney’s Hollywood Studios. The shows return will mark the end of The Wonderful World of Animation, which will continue to run nightly until March 12.

Disney Movie Magic is most likely returning thanks to the opening of Mickey and Minnie’s Runaway Railway. Currently, The Wonderful World of Animation incorporates fireworks and would, therefore, cause any ride operating in the Grauman’s Chinese Theater to be closed for the duration of the show. Disney Movie Magic uses no pyrotechnics and will allow the Chinese Theater to remain open. Meaning more guests per day will be able to ride Mickey and Minnie’s first-ever ride-through attraction and go home happier for it. Grauman’s Chinese Theater used to be home to the beloved attraction, The Great Movie Ride.

The show itself incorporates state-of-the-art projection technology to light up the Chinese Theater and surrounding buildings to produce a jaw-dropping visual spectacle with clips of Disney films and Disney-owned films.

The show features dozens of them, from Disney classics like “Mary Poppins” to contemporary blockbusters such as “Pirates of the Caribbean,” the Indiana Jones adventures and “Guardians of the Galaxy Vol. 2.” Also, each high-energy show spans a variety of different genres including musicals, romance, comedy, classics, fantasy, sci-fi and adventure.

If you never got a chance to see Disney Movie Magic during its first run, you can watch our video of it here:

Planning a trip to Disney’s Hollywood Studios or any other Disney World theme park? Our friends at Academy Travel are standing by at the ready. Backed with years of experience planning Disney vacations, Academy’s agents know what it takes to help you find the best possible deal on your next Walt Disney World Vacation. Click here to learn more and receive your free, no-obligation quote today!

What do you think about Disney’s Hollywood Studios bringing back Disney Movie Magic? Do you think anything will be changed? Are you sad to see The Wonderful World of Animation go? Let us know in the comments!