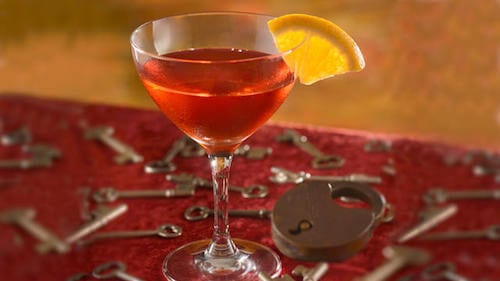 Contrary to popular belief, there are more places to drink around Walt Disney World besides EPCOT. You can find several unforgettable lounges all across the property (except, of course, in the Magic Kingdom). To prove that point, we at Inside the Magic wanted to give you our choice itinerary for a bar-hopping adventure to the best bars on-property. So, here are the top five bars you have to hit at Walt Disney World this year.

“Nomad Lounge invites all to stake a claim in their own wanderlust over mouth-watering small plates and a large selection of beer, wine and mixed drinks.”  –Walt Disney World

As you make the trek to Pandora, the last building you will see before you cross the bridge is Tiffins. It is a legendary restaurant that we whole-heartedly recommend, but just to the left of the restaurant is Tiffins Nomad Lounge. Inspired by the Imagineers and their expeditions to parts unknown to authentically create Disney’s Animal Kingdom, the Nomad Lounge is a luxurious destination one would expect to see while on safari. You do not need a reservation at the restaurant to enjoy this lounge.

The best part about the Nomad Lounge, besides the exclusive drink menu, is the chance to have your travel story shared alongside the Imagineers’. By making a $1 donation to conservation efforts, you’re given a tag with a writing prompt. Once you answer it, your waiter or waitress will take your tag and hang it above the bar. Imagine relaxing in an expedition-worthy bar, sipping your new favorite cocktail while you write, sharing your travel wisdom like a real explorer. It’s a pretty special place.

“Head in to this tranquil hideaway for an enchanting evening packed with fantastic fun and delightful surprises…Tucked away under the lush fronds of swaying palm trees, Trader Sam’s Grog Grotto is conveniently located steps away from the lavish lobby of the Disney’s Polynesian Village Resort and it’s the perfect place to unwind after a day at the theme parks” –Walt Disney World

Let me clarify right now: This is the indoor Grog Grotto! Not Trader Sam’s outside Tiki Terrace — his Grog Grotto. This little speakeasy is the best not-so-kept secret at Disney’s Polynesian Village Resort. Trader Sam’s speakeasy immediately transports you to an island lost in the South Pacific with the wackiest bartenders and waitstaff outside of The Whispering Canyon. While no reservations are necessary, the Grotto is very small and can fill up fast. So, if you arrive and it’s packed, they will take your name and let you know when your party can be seated.

Trader Sam’s drinks are big and strong. Several, like the Nautilus, are recommended to be shared with two people, and from 3:00 p.m. – 8:00 p.m., it’s opened to the whole family. Just be careful not to anger the ancient goddess Uh-Oa…

(And yes, it’s that Trader Sam from the Jungle Cruise ride in the Magic Kingdom.)

Think back to the very beginning of Indiana Jones and the Raiders of the Lost Ark. Remember when Indy is yelling at a fishing pilot, “Jock! Start the engine!” and after he jumps into the seaplane and yells at the pilot, “I hate snakes, Jock! I hate ’em!” Well, it’s that Jock.

Jock Lindsey was apparently a world-class adventurer and bush pilot, and his headquarters is now one of the coolest bars in Disney Springs. Open to the whole family. You will be immersed in official Indiana Jones memorabilia, and come face-to-face with drinks like “The Fountain of Youth,” “The Scottish Professor,” and the “Hovito Mojito—Barsol Quebranta Pisco.”

Nestled on the Boardwalk is a real trip back to vaudeville’s golden age. Enjoy classic drinks with a magician’s twist as you take in the old memorabilia from pictures to props and even a changing poster or two. AbracadaBar truly drives home the Boardwalk’s desire to transport you back to its turn-of-the-century heyday. It is also the perfect rest stop for those walking or boating from EPCOT’s International Gateway to Disney’s Hollywood Studios.

“Step into a realm of elegance and wonder and lounge in 4 sophisticated spaces themed after the Disney live-action film.” –Walt Disney World

Yes, we now have park stuff inspired by a live-action remake, and it’s the latest addition to the elegant options at the Grand Floridian. But, it’s okay because the Enchanted Rose is the most elegant Beauty and the Beast-themed lounge you can think of. From a chandelier that alludes to Belle’s golden ball gown to the baroque architecture. Along with its drink menu, the Enchanted Rose features small plates that scream sophistication such as White Sturgeon Caviar, Crab and Gnocchetti Gratin, and Truffle Fries.

I’m going to address this question before it appears in my comments about two dozen times. We did not include Oga’s Cantina in Disney’s Hollywood Studios because we wanted to highlight some Disney World bars that are a bit more off the beaten path and where guests can relax for as long as they wish (Oga’s Cantina has a time limit of 45 minutes). Guests will be spending enough time in Star Wars: Galaxy’s Edge already. We wanted to provide some new reasons to explore new areas of the property and see a new side of Walt Disney World.

What are some of your favorite bars at Walt Disney World? Let us know in the comments!