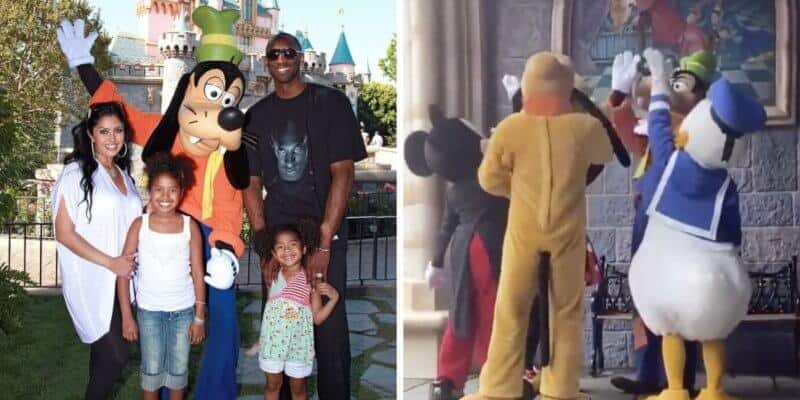 On Sunday, January 26, we learned of the tragic news of NBA legend, Kobe Bryant, has passed away along with his daughter, Gianna, and seven others during an unfortunate helicopter crash, which occurred in Calabasas, California.

Everyone across the country has been paying their respects to all of those who were lost, especially the NBA legend.

Bryant was a huge Disney person, and he and his family regularly visited the theme parks. So just the other day, the Fab Five (Mickey, Minnie, Donald, Goofy, and Pluto), decided to get together at Disneyland Resort and pay a tribute to Bryant.

In the Tweet below, you can see the Fab Five huddle up and then break the huddle by gesturing the iconic Kobe jump shot.

Someone sent me this video of the Fab Five at Disneyland honoring Kobe Bryant by breaking their huddle with the ‘Kobe!’ jump shot gesture. pic.twitter.com/HEFtUQ3NEU

Other Ways Disney Has Paid Respect To Kobe

Did you know there is an episode of Clone Wars, which is about the Citadel prison, which features a tribute to the NBA legend?

During this episode, viewers see a droid painted yellow and purple, which represents the colors of the Los Angeles Lakers. The droid’s name is K2-B4 — KB for Kobe Bryant and 24 for Bryant’s Jersey number.

You can read more about the Star Wars tribute here.

And the Disney CEO, Bob Iger, also paid his respects tweeting out “Today we @WaltDisneyCo mourn the tragic loss of @kobebryant. A giant in sports and a person so full of life. Terrible news and so hard to process….”

You can read more about the Bob Iger story here.

Disney also lit up the iconic Disney attraction, Space Mountain, with the colors or the Los Angeles Lakers, in tribute to Kobe Bryant.

And, on the popular attraction, Dumbo the Flying Elephant, Disney decided to cover up Dumbo #8 in honor of Kobe Bryant, who wore the #8 during his basketball career playing to the Los Angeles Lakers.

Dumbo Number 8 at Disneyland was down and covered for Kobe and his family. He loved going to Disneyland. pic.twitter.com/8kgQk5BqRb

Kobe Bryant had an amazing 20-year career with the NBA. He played for the Los Angeles Lakers his entire basketball career and retired in 2016.

Bryant holds dozens of records in the NBA including most seasons played for a single NBA franchise, 20, as well as most All-NBA selections, 15.

He was the youngest player to reach 33,000 points scored, in which he passed Kareem Abdul-Jabbar at 37 years and 138 days old.

Bryant wasn’t just an NBA legend — He was a loving husband to Vanessa Bryant and an amazing “girl dad” to four daughters. He was an inspiration to many across the country and was a motivational speaker. He truly was one of a kind.

We are sending our thoughts and prayers to all of those involved in the horrific helicopter crash.