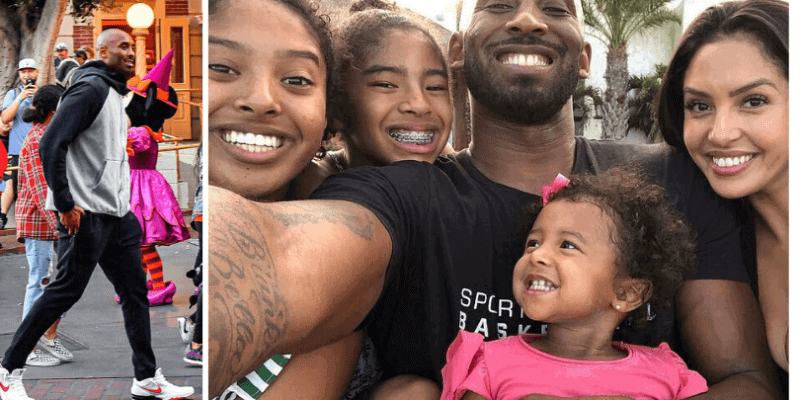 NBA legend Kobe Bryant, his 13-year-old daughter Gianna, and seven other people were tragically killed in a helicopter crash on Sunday in California. As we continue to remember Bryant and his legacy, photos have resurfaced online showing the Bryant family and their love for Disney. Kobe and his wife, Vanessa, have visited the Disney Parks for years — years before their four daughters were born. The photos below show not only the Bryant family at Disneyland just weeks before Kobe and Gianna’s passing, but also photos of Kobe and Vanessa as well as Kobe visiting the parks in honor of NBA championships.

If you take a look at the photos below, you will see Kobe and his wife, Vanessa, as well as three of their four daughters (Natalia, Gianna, and Bianka — their youngest daughter, Capri, did not join them on this trip) spending a day at the Disneyland Resort in Anaheim. You can see photos of the family smiling at Minnie Mouse in her Halloween outfit, having their photo taken by a VIP tour guide, and grinning ear to ear in a selfie they took together while at the theme park.

There’s nothing like spending a day at Disney with your family — and these photos of the Bryant family bring tears to our eyes since we know the exact happiness they must have been feeling together on this special day.

Bryant has always loved Disneyland. Last year, he shared on social media when he brought his wife to the theme parks to celebrate their anniversary and remember the times they spent together before their four princesses were born. And he also often visited the Disney Parks in celebration of NBA championships and posed for pictures with Disney characters, as you can see below.

Our hearts go out to the families, friends, and loved ones of all of the victims of the tragic crash that killed Kobe Bryant, his daughter Gianna, and every other person whose life was taken this weekend.