What is Celebration? The History Of A Community Developed By Disney - Inside the Magic 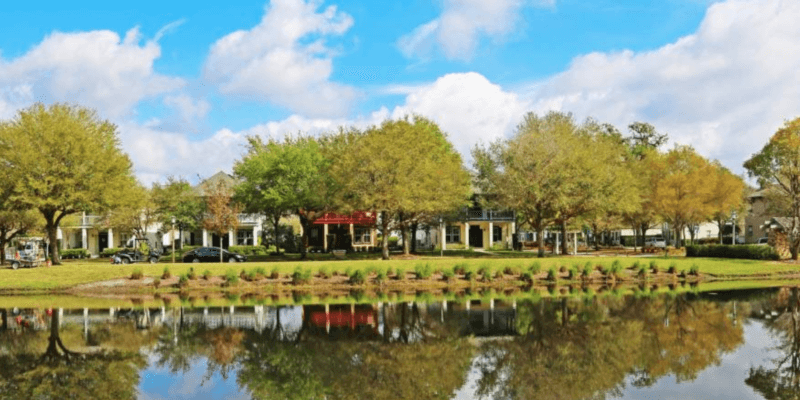 If you have visited Walt Disney World, or follow Disney very closely, you may have heard of Celebration, Florida. Because of the name, many assume it is a town or a city, but that actually isn’t the case. It is a “community” founded in 1996.

In fact, Celebration, Florida is an experiment in community planning called “New Urbanism” and was referred to as “Disney’s Town of Celebration” back in the day. It was meant to be a place to live and work.

But as previously mentioned, Celebration, Florida is not actually a town and even more surprising, it’s not even owned by the Walt Disney Company anymore.

Where is Celebration, Florida?

Celebration, located in Osceola County, is located to the north side of the community and backs up to the Walt Disney World.

Where did Celebration, Florida originate from?

As many of you know, Walt Disney had a vision of a Utopian city, in which he called E.P.C.O.T. Well, Celebration was actually dreamed up by Walt Disney World, Walt Disney Imagineering and The Disney Development Company after looking at the roughly 27,000 acres in Osceola and Orange counties. (In fact, Walt and his team secretly purchased those acres in the late 1960s.)

During the 80s and 90s, Walt Disney World was going through a complete overhaul which included the addition of several resort hotels, Disney-MGM Studios Theme Park, a nightclub district which was known as Pleasure Island, Typhoon Lagoon, and the Disney Vacation Club time-share business.

And during this time, while developing “a master plan” to manage the growth, Disney executives decided the Celebration land, which was located largely East of I-4, was not indeed part of the resort’s growth strategy.

The roughly 4,900 acres Celebration sits on was part of Walt Disney World and controlled by Disney’s governmental arm, The Reedy Creek Improvement District until development started. It was de-annexed from Reedy Creek so as not to dilute Disney’s control of the governmental entity, but two Reedy Creek utilities provided power and telecommunications to the “town.” In keeping with Walt Disney World as a whole, about half of the land is permanent nature conservation land.

Come 1991, Disney decided to announce the plans for Celebration, Florida to the general public and actually broke ground by “finding” the town in 1994, but the master-planning behind this actually happened a few years earlier in 1987.

During this time the Disney CEO was Michael Eisner who was utilizing high-profile “celebrity” architects across the Walt Disney Company. Why? Well, Eisner felt that it would cost about the same to build something “memorable and creative” compared to something “bland”. And with this came Robert A.M. Stern, who developed Celebration’s master plan along with Cooper, Robertson & Partners.

Along with Celebration, Florida, Stern’s firm also developed Celebration Health, which was a very crucial amenity during this time. (This was also part of a “then-new trend” toward whole-health care, which the purpose was to give off a spa-like feel.)

The Florida Hospital, which is now AdventHealth, was created and since developed and expanded into an even bigger hospital.

During the announcement of the master plan, it was also promised that an experimental school and state of the art infrastructure would be built to link all homes and businesses digitally.

There was one thing, in particular, that was crucial to the Celebration master plan and that was something called “pattern books”.

“Pattern books” were to be developed in order to ensure that no matter who ultimately built these homes, the community would still be “unified in design favoring a ‘small town’ feel with porches in the front and parking in the back.”

Many felt as though this was “too-good-to-be-true” and many actually compared this unity to towns from The Stepford Wives and The Truman Show.

In 1995, Disney decided to hold a lottery to decide which families would be the first to buy plots of land and build homes since the idea caught on with the public. There was even a small preview center that showed the public what the homes and community would look like.

According to the Celebration Foundation’s website, the first family moved into the first village on June 18, 1996. November 12, 1996 is Celebration’s “Founders Day” — marking the completion of the downtown, which was designed by numerous celebrity architects. Disney sold the downtown to private investors in January 2004.

What is Celebration Today?

An office complex facing U.S. 192, Celebration Place, was announced and built early in the process, but today, several Disney divisions occupy much of that office space. In fact, the headquarters for the Disney Cruise Line is there.

Today, Celebration, Florida actually has a relatively low-crime area and there are roughly 4,300 homes and condos, six houses of worship, two public grade schools, a Montessori Academy, a branch of Stetson University, and a public library.

There are also shops, hotels and businesses, all surrounded by more than 40 public parks and miles and miles of walking trails and boardwalks!

Comments Off on What is Celebration? The History Of A Community Developed By Disney