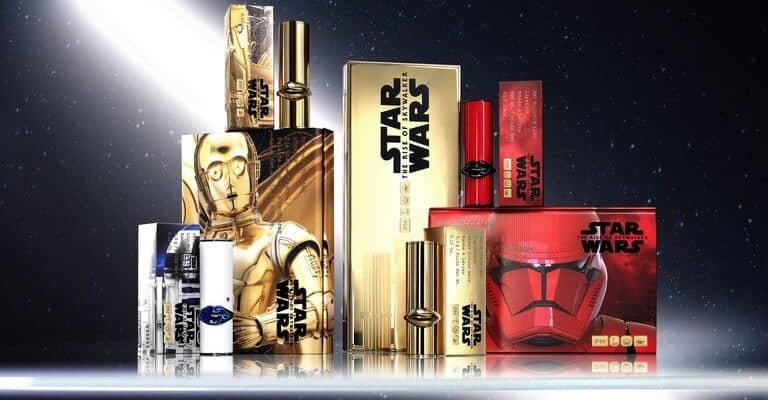 We are loving all of the new Star Wars merchandise coming out ahead of The Rise of Skywalker, and some of the latest items we can’t wait to get our hands on are part of a new makeup collection by Pat McGrath Labs.

The Galactic Gold Palette, as its name suggests, features none other than C-3PO along with aptly inspired shades of eyeshadow perfect for channeling your favorite droids. The packaging featuring 3PO himself (one of the most underrated Star Wars characters in my opinion) already has me decided on buying the entire collection.

Fans of characters like Princess Leia and R2-D2 will be thrilled to see that the design of many pieces in the collection take their cues from character looks reminiscent of the first trilogy. Pat McGath shared her excitement over finding inspiration in Star Wars characters stating, “Anyone who follows me on social media knows I am obsessed with Star Wars and otherworldly galactic opulence, ranging from the rebellious beauty of Princess Leia to the gilded glamour of C-3PO.”

The collection’s lip line is heavily based on the style of lightsabers with new versions of McGrath’s Lip Fetish Balm being reinvented for The Rise of Skywalker. New lip balm products will come in colors like Nude Astral, Gold Astral and Clear, and the finish of the lip products themselves perfectly match the uniquely Star Wars mechanical shine fans will see on the packaging.

While McGrath has taken inspiration from Star Wars before, this all-new collection is ready to launch just for The Rise of Skywalker, and as a result features pieces based on the yet-to-be seen Sith Troopers. The new collection has been in the works since shortly after the success of her Mothership IV: Decadence Eye Palette which sold out almost immediately after is launched. “Fans have been asking me daily for its return,” says McGrath, “I’m thrilled that it’s back in cult collectible gold packaging.”

Hoping to get your hands on the new Star Wars line? It launches exclusively at Selfridges in the UK and on PatMcGrath.com on December 13 (get on that ASAP so you have it for the debut of the film!). A second drop of the collection is also set to happen on December 26 so if you’re hoping to score some gift cards or cash this holiday season you may be able to order from the latest Pat McGrath / Star Wars collaboration then!

Will you be purchasing the latest Star Wars makeup? Let us know what you think in the comments!

Comments Off on Use the force and get the latest Star Wars makeup collection!