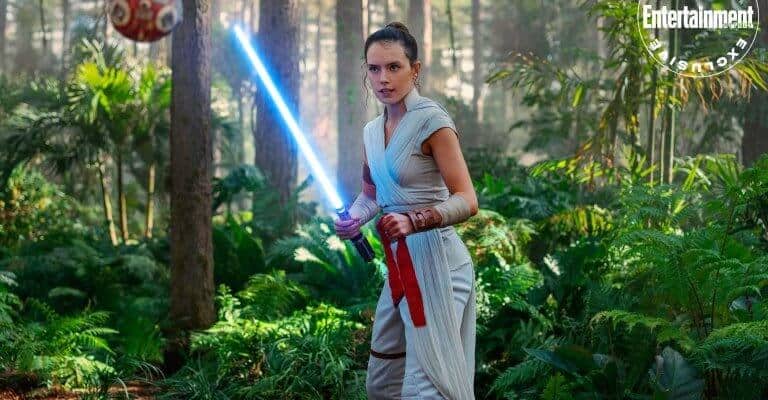 Fans might have been a tad pre-occupied enjoying the success of Disney+ the Mandalorian. However, Entertainment Weekly just gave us a galactic tease with the release of new images so we can start dissecting all our Star Wars theories on the upcoming release of Star Wars: The Rise of Skywalker.

So, without further ado… punch it Chewie!

Here we see Rey as she faces off with a training remote. The intense look on her face tells us she is not playing around. We can’t wait to find out what she’s so focused on!

Next up, we see a scarred First Order Supreme Leader Kylo Ren with an array of stormtroopers. We’re getting all the concerned feels on this one!

This next shot shows newcomer to the saga, Jannah (Naomi Ackie) and Stormtrooper-turned-Resistance fighter, Finn. Both looking fierce and appearing ready for what’s to come!

In a more seemingly relaxed pose, we see Pilot Poe Dameron, played by Oscar Isaac along with Finn and Resistance mechanic and fighter Rose Tico, played by Kelly Marie Tran. So many questions about what they are discussing here. December 20th can’t come soon enough!

We are feeling cold and terrified with this still-shot. This storm of stormtroopers (and snowtroopers) on the march are clearly on a mission.

Finn, Chewbacca, Rey, and Poe face a threat. We are biting our fingernails until we can solve this mystery!

Yet another still-shot of what must be an action sequence. Again, we’re seeing some concerned looks on the faces of Chewie, Poe, and Finn as they navigate the Millenium Falcon. But what is ahead of them… well, we cannot wait to find out!

To add to the excitement, the official Star Wars Instagram account released a new trailer. See it below:

“We’re all in this. ‘Til the end.” See @StarWars: #TheRiseOfSkywalker in theaters December 20. Get your tickets: (Link in Bio)

Do you have any solid theories you can share with us? Be sure to let us know what you know in the comments so we can discuss while we wait for the release of Star Wars: The Rise of Skywalker, December 20, 2019!

Comments Off on Star Wars: The Rise of Skywalker Reveals 8 New Photos