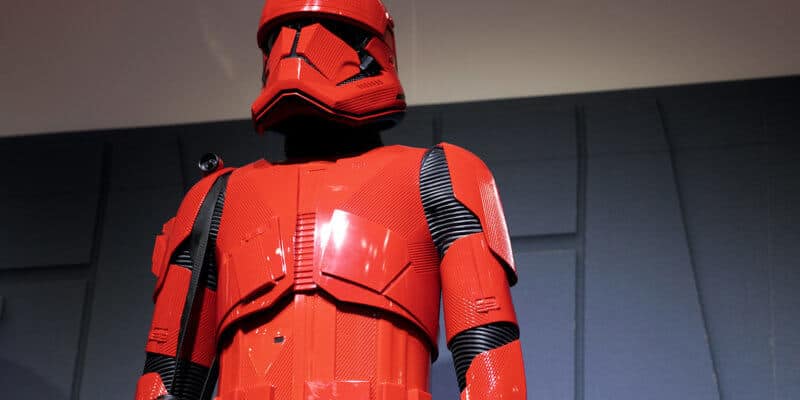 When we first learned that Emperor Palpatine would have a role in ending of the Skywalker saga, the Star Wars fandom was abuzz with what this could mean and how it would impact the rest of the storyline. By the release of the final trailer, the details have started to come into place, most recently concerning Sith Troopers.

Little is known about Sith Troopers so far outside of their enhanced design featuring foreboding red armor, but we’re expecting them to be a massive “force” in the latest film. According to Star Wars Insider, the Sith Troopers are an “elite force of Stormtroopers that draw inspiration and power from a dark and ancient legacy.” From this, it’s fair to speculate that the Sith could be intricately tied to Emperor Palpatine himself.

More fan theories suggest that the Sith Troopers could have Force powers, though that leaves us with further speculation as to why they’ve only begun to appear with the latest film. Star Wars Insider also shares that Sith Troopers are “aggressive and well-trained, [they] are adept in armed and unarmed combat and are equipped with an array of deadly energy weapons and explosives”.

If they do have Force powers, it’s possible that they’ve been cultivated by Palpatine for some number of years and have simply been waiting for the most opportune moment to make their appearance. Furthermore, does all of this mean that Palpatine is readying himself to rule over a new Sith Emperor by the saga’s end?

Given what we know about the Sith Troopers so far, many believe that they have been living or perhaps just surviving in a dark, unknown region, waiting to finish their mission. With the details of the Sith being fuzzy at the moment, we do at least know that Palpatine had a desire to explore unknown regions (from the comic books, “Darth Vader: Dark Lord of the Sith”). Given this information, it seems entirely possible that the Sith Troopers have been residing in one of these regions waiting for Palpatine’s return during the next Star Wars film.

The mysterious nature of Emperor Palpatine’s role in Episode IX has had Star Wars fans speculating how this would impact the storyline since the first trailer was released. While Palpatine will clearly be a part of the latest movie, we’ve only gotten hints of his presence in the trailers and promotional media released thus far with images of his throne, his laugh which can be heard at the end of the first trailer, and an image of his face shown on a piece of glass.

Another fan theory is that during The Rise of Skywalker Kylo Ren is searching for something called the Wayfinder, which will help him get to the Sith Troopers. Some fans use this as a reason to believe that Kylo Ren needs the new Sith to take control of Palpatine’s legacy.

We will have to wait and see what comes of this new Stormtrooper design as Star Wars: The Rise of Skywalker hits theaters on December 20. The final film in the trilogy that began with the Force Awakens certainly has fans on the edge of their seats, even from the trailers alone, so we can’t wait to see where the story goes and how these characters interact with new areas of the dark side.

Want to experience more Star Wars and put yourself right in the middle of the story? Explore Star Wars: Galaxy’s Edge at both Disneyland and the Walt Disney World Resort. Our preferred Disney travel experts at Academy Travel can help you book a trip to either park and ensure that you’ll get the most of your Star Wars experience while we wait for the latest film to premiere next month. Click here for a free, no-obligation quote, and start planning your Star Wars story today.

What do you think the Sith Troopers will be used for in The Rise of Skywalker? Let us know in the comments!

Comments Off on Sith Trooper details emerge ahead of Star Wars: The Rise of Skywalker