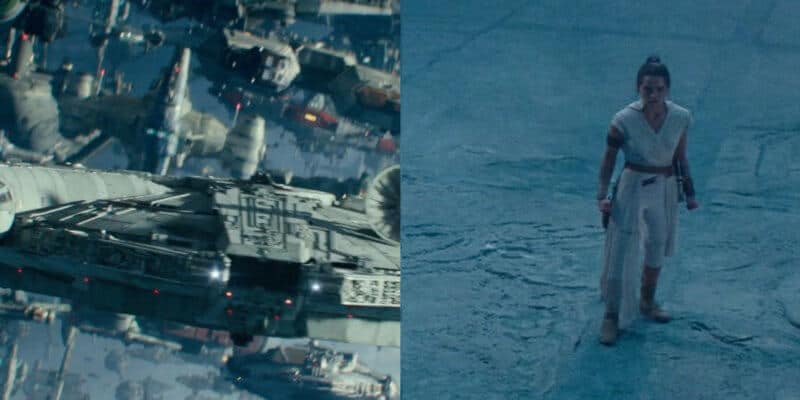 During last night’s NFL football game, Star Wars fans everywhere finally got another peek at the upcoming intergalactic finale “Star Wars: The Rise of Skywalker.” And with it, we got a preview of some exciting and heart-wrenching occurrences to be featured in the new film, including what we think is First Order and Resistance ships, what appears to be hard times for C-3PO, and a highly-discussed appearance by Palpatine.

The epic new trailer begins with Rey running through a forest, which transitions to more shots of the whereabouts of the rest of the team, including Finn, Poe Dameron, Kelly Marie Tran, and Chewbacca. This then moves to fierce waves and a lightsaber battle between Rey and Kylo Ren.

However, before their battle ensues, a fleet of TIE Fighter ships appear to be flying into battle, along with an even larger fleet of Resistance ships. Fan theories online speculate this is also where fans get a look at what is believed to be the Ghostship sitting to the right of the Millennium Falcon.

First seen in “Star Wars Rebels,” the ship was believed to have appeared in “Rogue One” and since this is the last film in the trilogy, it wouldn’t be a shock if J.J. Abrams wanted to include the ship in this movie as well for fans. Of course, Lucasfilm, nor anyone working on the movie will say what the ship actually is. However, it does look quite similar to the infamous ship.

What exactly is happening to C-3PO in the shot is unknown. However, all will be revealed when the film releases in theaters later this year. From the scene, it’s hard to say that things are looking up for the droid, but what we can say is that we’re hoping for the best!

The trailer continues with action-packed sequences and a brief shot of General Leia hugging Rey before coming to one last epic scene that has fans everywhere going CRAZY. A scene that is believed to feature an appearance by Palpatine.

In the final shot of the trailer, you can hear Emperor Palpatine’s voice in the background. Then, in a brief shot, we see both Rey in position ready to take the emperor head-on and what looks like the side of Palpatine’s face.

“Star Wars: The Rise of Skywalker” is set to premiere in theaters on December 20.

What are your thoughts on all of these exciting reveals from the new “Star Wars: The Rise of Skywalker” trailer? Let us know in the comments!