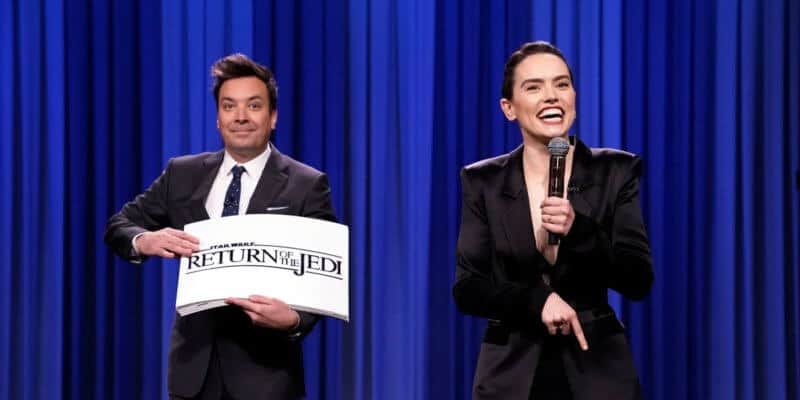 We’re suckers for Jimmy Fallon and any sort of Disney or Star Wars tie in. Recently, our Frozen 2 leading lady, Kristen Bell dropped the mic when she joined Jimmy for the most amazing history of Disney songs medley. This time, Jimmy takes us to a galaxy far far away with the help of Star Wars: The Rise of Skywalker star, Daisy Ridley.

On Monday’s episode of The Tonight Show starring Jimmy Fallon, Ridley joined Fallon in a recap-rap segment, and it was EPIC!

Daisy Ridley showed up and showed out with her best rap swagger at Jimmy Fallon‘s The Tonight Show when she dropped a rhyme or two and got us caught up and ready for her upcoming film, Star Wars: The Rise of Skywalker.

For those of us who might not want to watch the full marathon before the new movie comes out next month, Daisy’s 2.5-minute recap will give you all the highlights you need a refresher on. With the help of Jimmy’s visual cue-cards and the house band, the Roots’ Star Wars-score-inspired beats, we were able to follow along for the lightspeed ride.

Ridley, who plays Rey in the third Star Wars trilogy, gifted us with a stellar recap of all 8 movies in the Star Wars nonology, or three trilogies also known as the Skywalker Saga. The polished lyrics focused on the timeline of just those movies, not including any of the Star Wars Story movies or the animated series. But, did we catch a “Reylo” clue in there at one point?! You’ll have to watch it to find out!

We’re not expecting Daisy to snag a rap recording deal any time soon. But we’re grateful for her clear enunciation, an actor skill we’d venture to assume, so we could easily follow along. However, if you missed a few lines, here are some of our favorites: “Let go of everything/ That you fear to lose/ Be the spark the lights the fire/ And may the Force be with you.” And of course, the teaser of teasers referring to Kylo Ren: “…won’t put on a shirt.”

It’s fair to say after watching that, we are more than ready for the release of Star Wars: The Rise of Skywalker, in theaters December 20, 2019. Are you all caught up and ready too? Let us know in the comments!