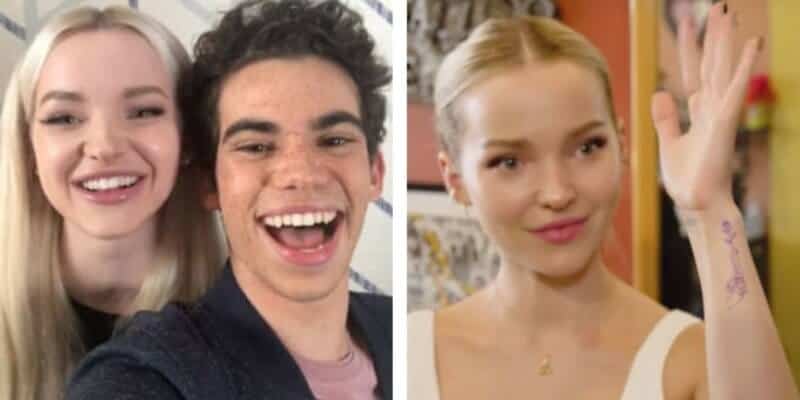 Dove Cameron isn’t new to tattoos, she even states it’s “like a day in the life”, but her latest piece of ink as a very special meaning.

In a recent video posted to Dove’s YouTube channel, she takes viewers on her journey to get her 11th tattoo at her favorite tattoo parlor, Ten Thousand Waves.

Dove filmed the process of selecting a tattoo, the placement of the tattoo, and the inking of her tattoo. While on her way to the tattoo parlor, she explained that she wanted to get a single needle firearm of some sort, whether it be a pistol or a revolver or something of that sort.

But the most important part is she wanted it to incorporate a single rose or a small bouquet coming out of it because Dove is very anti-gun and pro-gun regulation. Dove also stated it is a nationally recognized symbol of peace and for the anti-gun movements.

But this wasn’t the only meaning behind this piece of ink. Dove shared with the camera that her friend, Cameron Boyce, passed away a few months ago just after he started an organization called Wielding Peace. Boyce wanted to get influential people holding things that looked like they were in the shape of a gun, but it would be something artistic and peaceful.

“He did it with a bouquet of flowers actually and I think that that’s really beautiful and I’ve been trying to think of a tattoo to get for him since he passed and I just felt that this one was really appropriate,” Dove shared.

Both Dove Cameron and Cameron Boyce were extremely close as they both starred in the Disney Channel Original Film franchise, Descendants. Both also shared the same views on gun control.

You can watch Dove Cameron’s full YouTube video below.

Cameron Boyce passed away earlier this year from epilepsy, just before Descendants 3 was released. Boyce was only 20 years young.

What do you think of Dove Cameron’s new tattoo in honor of Cameron Boyce? Let us know in the comments.