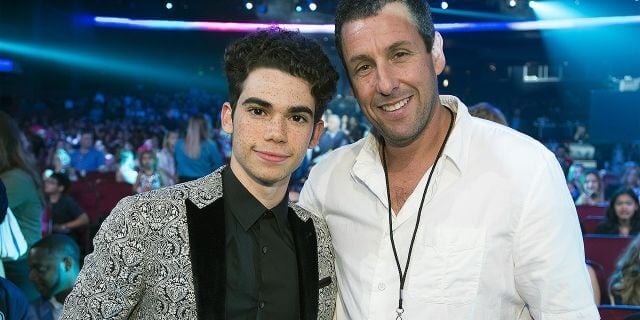 Actor and Disney star Cameron Boyce passed away just over one week ago, and already fans and celebrities worldwide have taken to the internet to share their remorse and pay tribute. In honor of Boyce, Adam Sandler has helped raise $15,000 for the Thirst Project, a nonprofit organization that aims to provide clean drinking water in communities in Africa.

Boyce, who passed away in his sleep after an epilepsy-induced seizure, raised over $30,000 for Thirst Project, and now celebrities and fans are carrying on his charitable legacy. So far, people have donated around $15,000 to Thirst Project with the help of Sandler, who posted a fundraiser on Facebook to encourage fans to donate to the organization after Boyce’s death, Thirst Project CEO and co-founder Seth Maxwell told TMZ. Sandler, who starred as Boyce’s father in the “Grown-Ups” films, previously shared a heartfelt social media post dedicated to Boyce after the actor passed away last week. Sandler spread the word and encouraged his social media followers to donate to both Thirst Project and United Way of Los Angeles, two organizations close to Boyce’s heart.

“Cameron Boyce (@thecameronboyce) worked hard to help other people through great charitable organizations like @thirstproject & @launitedway. Let’s show our love and respect by continuing to support them in his name,” Sandler posted on Instagram.

Cameron Boyce (@thecameronboyce) worked hard to help other people through great charitable organizations like @thirstproject & @launitedway. Let’s show our love and respect by continuing to support them in his name.

In addition to Sandler, other celebrities have taken to social media to encourage others to donate, as well. Nolan Gould and Skai Jackson, two young Hollywood stars and friends of Boyce, asked for donations for Thirst Project on behalf of Boyce. Disney even cancelled the “Descendents 3” red carpet premiere and instead chose to donate money to Thirst Project.

“We’re proud to be part of Cameron Boyce’s legacy by showcasing his talents on screen but we are canceling the red carpet premiere event for ‘Descendants 3’ and instead, The Walt Disney Company will make a donation to the Thirst Project, a philanthropic organization to which Cameron was deeply committed,” Disney told Page Six in a statement last week.

Thirst Project even issued a statement on Twitter in remembrance of Boyce and to thank those who have made donations to the organization in his honor.

You can make a donation to Thirst Project in honor of Cameron Boyce on their official website.