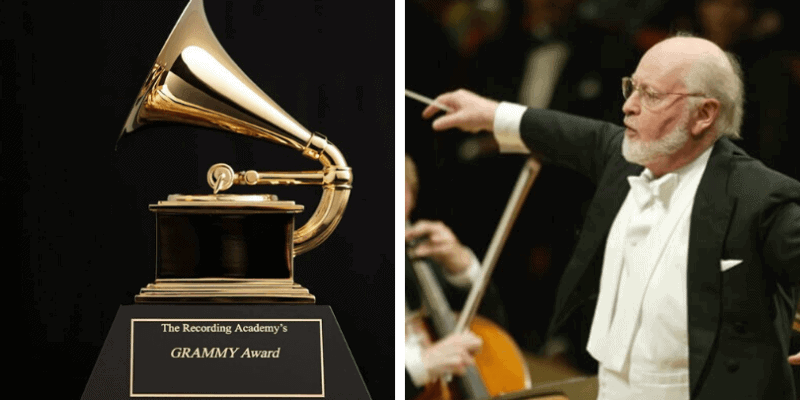 John Williams’ powerful score for Star Wars: Galaxy’s Edge has been nominated for a GRAMMY.

Titled “Star Wars: Galaxy’s Edge Symphonic Suite,” the background music to your adventure in this immersive land was nominated for the “Best Instrumental Composition” category.

You can’t have Star Wars without John Williams. From the trumpeting “Main Title” to “The March of the Storm Troopers,” his impressionistic scores carry over through every installment of the Skywalker Saga. Now, his music scores your own Star Wars adventure on the planet Batuu.

John Williams’ Star Wars scores have also garnered their own list of awards. The iconic composer’s work for the first Star Wars film in 1977 won an Academy Award for Best Original Score and it is his only Star Wars Oscar so far. His score for Empire Strikes Back, Return of the Jedi, The Force Awakens and The Last Jedi all received Acadamy Award Nominations for the same category.

This also far from the first GRAMMY Nomination Williams has received. His music has earned over 60 GRAMMY nominations, 12 of which were given to Star Wars installments. Out of the 20 GRAMMYs Williams has taken home, 5 of them were for his work on Star Wars. The 61st GRAMMY Awards Ceremony will be held on Sunday, February 10.

Star Wars: Galaxy’s Edge has already entertained millions of guests since opening at both Disneyland Park and Disney’s Hollywood Studios this summer. From blue milk to Storm Troopers, a visit to the Black Spire Outpost on the planet Batuu is an immersive theme park experience like no other. Over 5 Million guests have already dared to take the smuggler’s run on the Millennium Falcon, and the entire galaxy anxiously waits for the opening of the land’s next experience Rise of the Resistance.

Have you had a chance to visit Star Wars: Galaxy’s Edge yet? What do you think of John Williams’ score for the area? What’s your favorite John Williams Star Wars piece? Let us know in the comments!