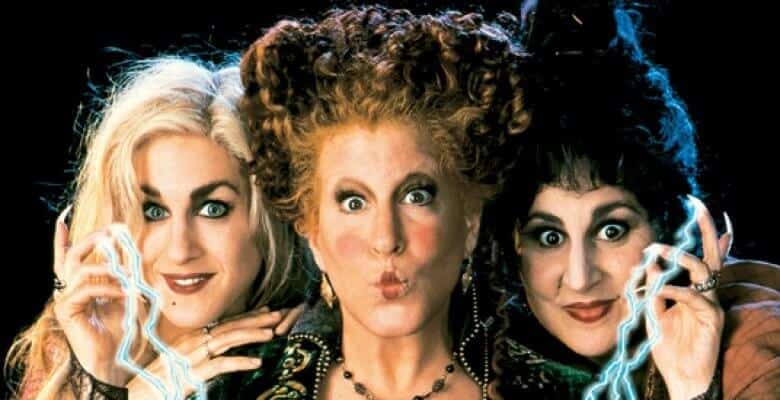 A sequel to the cult classic film Hocus Pocus is reportedly in the works as a Disney+ exclusive, and we can’t wait to “run amok” with this brand new story!

Disney recently hired Workaholics writer and co-producer Jen D’Angelo to write the script for Hocus Pocus 2. While the plot details of the second film have not yet been revealed, a sequel of the original tale of the Sanderson Sisters appeared in 2018 in the form of a young adult novel titled Hocus Pocus and the All New Sequel.

The original film debuted in 1993, a perfect 300 years after the Salem Witch Trials of 1693 (that in reality took place a year earlier in 1692, but “299 years” wasn’t quite catchy enough!). The plot follows Winifred Sanderson (Bette Midler) alongside sisters Mary (Kathy Najimy) and Sarah (Sarah Jessica Park) as they are executed in Salem, Massachusetts for practicing witchcraft and presumably causing the death(s) of innocent children.

In present-day (or 1993) Salem, Max Dennison (Omri Katz) moves to the east coast from California with his parents and sister Dani (Thora Birch). The two team up with Max’s crush Allison (Vinessa Shaw) after a virgin (aka Max) lights the Sanderson Sisters’ black flame candle on Halloween night thereby resurrecting their curse and bringing them back to life. Joined by the lovable Thackary Binx in the form of a black cat (Jason Marsden), the kids work together to put an end to the curse and protect Salem from the return of the Sanderson Sisters once and for all.

When the original film was released in 1993, it was met with lackluster reviews from critics, and has since earned a place as a Halloween cult classic primarily due to the nostalgia factor of fans who grew up in the 90s. The story has since been interpreted as a live performance during Mickey’s Not-So-Scary Halloween Party, in various merchandise lines in Disney theme parks and beyond, and as a driving force for current trips to Salem, Massachusetts to see where the movie was filmed.

In 1993, Hocus Pocus made $39 million at the box office — despite a disappointing performance back then however, the film has clearly gained a new life and today is one of the most popular Halloween movies, airing daily in October for Freeform’s 31 Days of Halloween.

Plans to produce a sequel to Hocus Pocus have been rumored for years, and with a script-writer finally confirmed for this straight-to-Disney+ production we’re excited to see what direction the sequel takes. It’s quite possible that the new movie will follow the plot of the book (which focuses on grown up Max and Allison’s daughter). Kenny Ortega, director of the original film and recent Disney Legend, has yet to weigh in on the details of a sequel, and the original cast is not yet confirmed though fans are certainly hopeful that they’ll at least be making an appearance.

Whatever becomes of Hocus Pocus 2, we’re thrilled to see the story of the Sanderson Sisters continue and we can’t wait to enjoy some extra classic Halloween magic on Disney+!

You can get your Hocus Pocus fix on your next Disney vacation by shopping for some new theme park-exclusive merchandise or catching the Sanderson Sisters on stage during Mickey’s Not-So-Scary Halloween Party! Academy Travel, our go-to authorized Disney vacation planners can get you set up with your Disney resort accommodations special event tickets, and more so you can celebrate the magic of Hocus Pocus on your next fall getaway. Click here for a free, no obligation quote and get excited by screening the movie before your trip!

Are you a fan of Hocus Pocus? Making sure you’re signed up for Disney+ just to catch the sequel? Let us know in the comments!