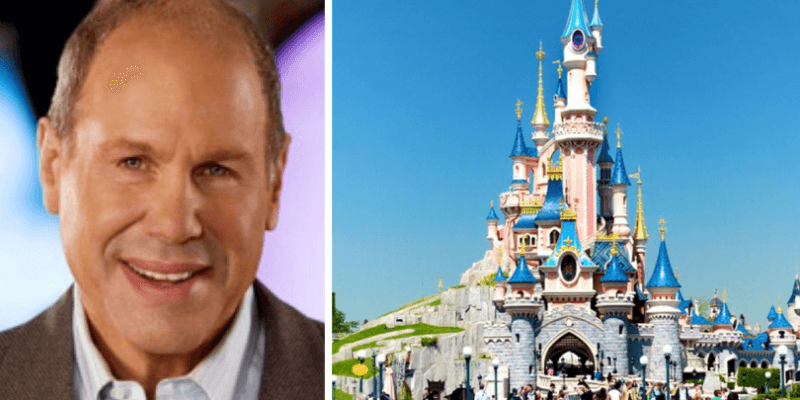 Disneyland Resort in California is the Happiest Place on Earth. Walt Disney World in Florida is the vacation capital of the world. And, Disney Parks worldwide are known for making dreams come true for guests of all ages. But what’s up with Disneyland Paris? Former Chairman and Chief Executive Officer of The Walt Disney Company Michael Eisner weighs in on why Disneyland Paris was built and what makes the resort so magical.

Disneyland Paris is, in a way, its own world. Located on the outskirts of the city, the resort encompasses six on-site hotels, a quaint dining and shopping district called Disney Village, and two theme parks: Walt Disney Studios and Disneyland. It’s like a cross between California’s Disneyland and Florida’s Disney World–it has the appeal of the Disney bubble since it’s in the French countryside, but it’s small and charming.

But why did Disney choose to build its first European theme park in France? In a recent interview with Forbes, Eisner shared his take.

Eisner was with The Walt Disney Company back when Disneyland Paris first opened in 1992, and he says that since Paris is at the crossroads of Europe, with its strong tourist draw and centralized location, it made sense for Disney to expand its theme parks there.

“We wanted to be close to the biggest population base, the crossroads of Europe,” he said. “Although the UK has a welcoming business and creative climate, we didn’t consider England for Euro Disney for the reasons of location. We considered France and Spain. Most of the strong Disney management we inherited would have preferred to go to Spain because of the presumed similarities to Los Angeles and Florida. But that was a false assumption. Florida is warmer than Spain in the winter and has a history of Disney available tourism. For decades American travelers traveled past Orlando on their way to Southern Florida to places like Miami. People left Boston, New York, Toronto and Philadelphia etc. and drove through Florida to Miami.”

In addition to the bustling tourism in Paris (and the fact that the rural land would be easy to develop since at the time it was used for farming), France also offers something that Disney thought was appealing: weather. Eisner shared with Forbes that Spain’s winters aren’t as warm as Florida’s, and even though France does experience some snow, it wouldn’t keep guests from visiting the theme park. At the time, Disney was hoping that France would agree to extend its RER train system to reach as close to the Disneyland Paris gates as possible, which we now know worked out. And with the U.K. being the second-highest market after France in terms of tourism to Disneyland Paris, it made sense for there to be a train to run from the U.K. all the way to Disneyland, as well.

“My view was that, unless there is a blizzard, people in France do not let the weather keep them from going out,” Eisner said. “We knew, if France agree to extend the RER to our front gate as well as the TGV, Disneyland Paris would work. And in addition, the tunnel to the UK was on the horizon. So the big question on the table was whether to build in Spain, because of the Disney California mentality, or France because of my New York mentality. I never wavered.”

So with convenient transportation options to and from the resort, the centralized location in Europe, and a love for Disney, Disneyland Paris just made sense. And while Disney has had to put in a lot of effort in recent years to breathe new life into its Walt Disney Studios park which still needs more TLC, for the most part the Paris resort has been a positive addition to France.

Forbes reports that most of the millions of guests who visit Disneyland Paris live within a two-hour radius of the theme parks. Disneyland Paris is the most visited tourist attraction in all of Europe–people visiting the content from around the world will often tack on a day or two at Disneyland Paris to their trip. And since it’s so convenient to get to Disneyland Paris using public transportation in France or train from the U.K., locals and annual passholders can easily visit often.

The resort has also brought countless employment opportunities to the country. Disneyland Paris is the largest single-site employer in all of France. And Forbes reports that for every one job created at the resort, over three jobs are created elsewhere in the country. This means Disneyland Paris generates over 56,000 direct, indirect, and induced jobs every year, which many believe is a result of Eisner’s “magic touch” that was the force behind the creation of the first international theme park fully owned by Disney.

Whether you’re a fan of Disneyland Paris or not, one thing’s for certain: it’s not going anywhere. The flagship park is incredibly magical and detailed (with arguably the prettiest Disney Parks castle we’ve seen). And even though more work has to be done at Walt Disney Studios, we’re sure it will turn out spectacular.

What do you think of Eisner’s take on Disneyland Paris? Share your thoughts with us in the comments!