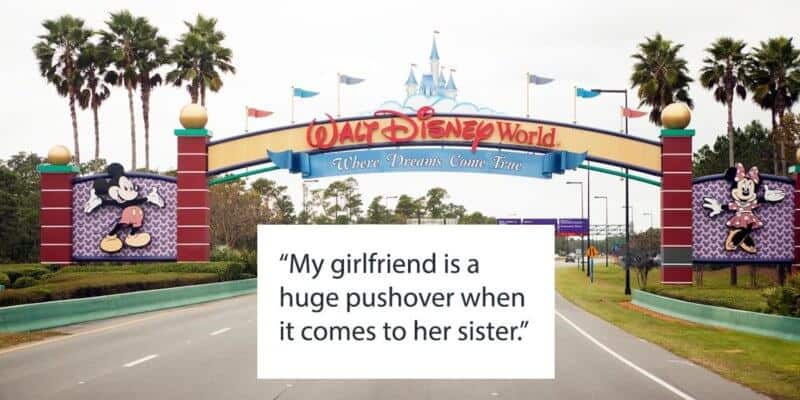 For over two years, a Reddit user by the name disneyboundgaston has been planning a weeklong getaway to Walt Disney World and Universal Studios with friends. He and his girlfriend and their friends have been anticipating the trip and are hoping to head to the Sunshine State’s theme parks later this month.

But he’s run into a problem.

“The first rule we made when we started to plan this trip is that it would be childfree. The two people in our group that have children agreed that their children were young enough not to be traumatized from not going to Disney at 3 years old.”

But at the last minute, one of his pals had to bow out of the Disney World trip. Since he had already paid for everything, he was generous enough to offer his spot to someone who’d want to take his place. And he wasn’t concerned about being reimbursed. Wow! A virtually free trip for some lucky Disney fan!

So disneyboundgaston found a friend to fill the spot, but before he could say anything to his traveling party, his girlfriend (to whom he hopes to propose on the trip) said she had invited her sister to join them in the empty spot. This didn’t sit well with the disgruntled Reddit user, and not simply because she’s a future (hopefully) in-law.

“I asked how, because her sister just had a baby and at the time of the trip [the baby] will be 6 or 7 weeks [old]. She said that her sister would just bring her daughter and we would make it work.”

Remember, for more than two years, the trip has been planned sans kids.

Disneyboundgaston explained that his girlfriend is a “huge pushover” when it comes to her sister and that she has never said no to her sister before. So he took matters into his own hands.

“I called [my girlfriend’s] sister and tried to politely tell her that everyone going on this trip is either in their late 20’s or early to mid-’30s. She wouldn’t listen and started rambling about her daughter getting pictures with Mickey and Elsa and how much fun she’ll have,” he wrote on Reddit.

He points out that his girlfriend’s sister also named her baby “Elsa” after the Queen of Arendelle.

Uh oh. Sounds like another hysterically excitable Disney fan bound for the park, but there was the issue of the sister wanting to bring her newborn on this already determined “child-free” trip.

“I interrupted her and said that the trip was adults only and her newborn was not allowed,” the Reddit user shared. “I then pointed out that a lot of the places we’ll be going to after the parks are adults only and no one would want to stay behind with her and the baby. Plus I don’t think an unvaccinated newborn should be taken to Disney.”

Disneyboundgaston says that his girlfriend’s sister proceeded to call him names and was angry at him for “telling her how to parent her child.” She also said that it’s “creepy that a bunch of adults wanted to go to Disney [World] without children.”

Disneyboundgaston stopped the conversation by telling the sister that the empty spot had already been taken. But he assured her that they’d take plenty of photos of the Disney bounding outfits the childless bunch of parkgoers had coordinated. But he was only met with more profanity.

And the worst part? The man’s girlfriend says it was mean of him to exclude her sister from the trip because she has a baby, and she demanded that he apologize to her sister for doing so.

The man took to Reddit and asked if it were unreasonable of him to insist that the sister not join the group because her baby was not welcome. And to his delight, most every Redditor who responded did so in support of disneyboundgaston’s viewpoint. Several Reddit users were, um, enthusiastic in their support of the man, like this user who felt that the girlfriend’s sister was ridiculous in her response: 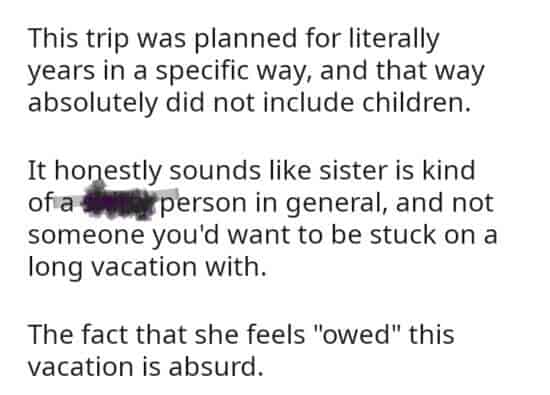 Reddit user” ambthab” says that the sister will ruin everyone else’s trip by bringing her baby along: 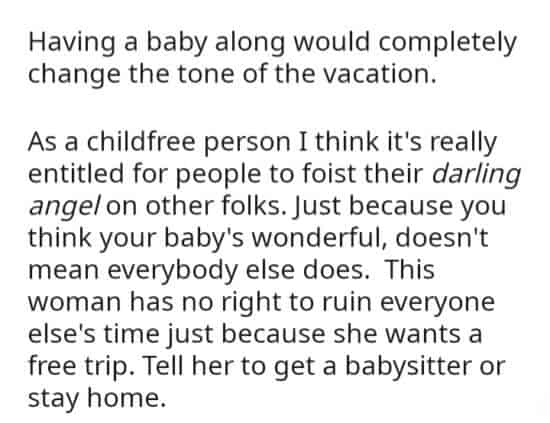 Other users pointed out how rude and selfish they felt the man’s girlfriend was for putting him in such a spot. Some, like Reddit user “joeymcswizzle” even thinks more blame belongs on the girlfriend than the sister: 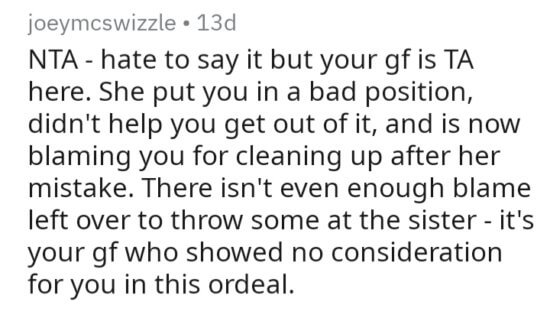 User “themapoe” even poked fun at the sister’s choice in naming her child (we’re not sure what that has to do with the baby coming on the trip or not, but we’re guessing it’s not a sign of support):

A user who goes by the name “webshiva” goes so far as to suggest the man wait to propose to his girlfriend until after the trip, just to see how it plays out, in case the situation changes his mind about his choice in a future wife: 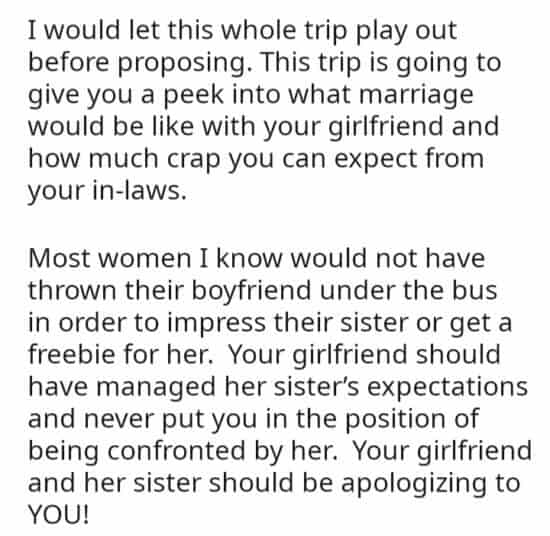 One of the users agreed with the man’s position, but suggested that he should have been less “snarky.” Apparently, the man agreed: 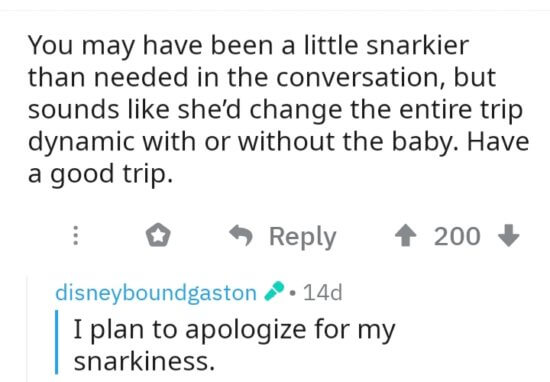 In fact, user “kt-bug17” had one of the only responses that was even close to encouraging the man to allow the sister to bring her baby. But even this user only pointed out the “rider-switch” option: 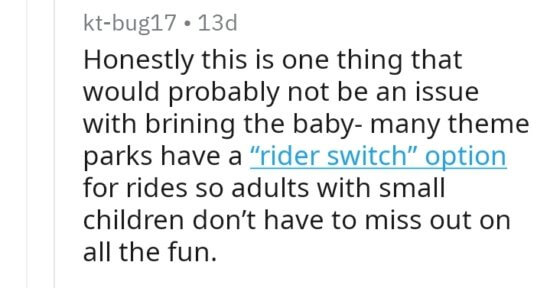 This situation sounds somewhat reminiscent of a situation over the summer. In July, Inside the Magic brought you the story of a furious mother who took to social media and used a buffet of expletives to convey her hatred for childless people who visit Disney World. The woman felt that she shouldn’t have to stand in line for a pretzel at the parks with her fussy 3-year-old, especially when it was because childless Guests were in line in front of her. She used the term “childless Millennials” to describe those she was most angry with.

Her post went viral, and so did the responses from childless Disney Parks fans all over the country. The term “childless millennials” was used all over social media and several childless Disney fans took to the parks with T-shirts that let everyone know they were childless, at Disney World and proud of it!

Do you think the man was unreasonable to demand no newborns be allowed on the group’s “child-free” Disney World trip? Was the sister wrong to become so angry about being told she couldn’t bring her baby? Let us know what you think!