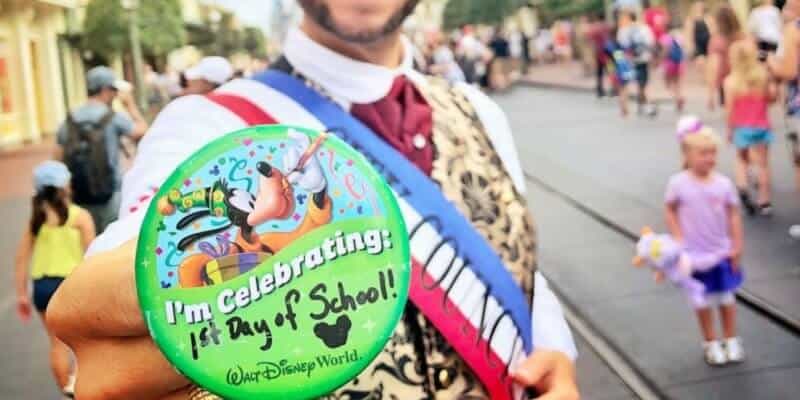 As all parents know, kids can become quite a handful over the summer when they traditionally take time away from their studies to enjoy the warmer months of the year at home or on vacation with family. And one mom, who happens to be a huge Disney World fan, decided to celebrate her kids return to class with an epic day at Magic Kingdom–which she commemorated through a series of awesome pictures on Instagram!

Lisa DiNoto is a mother of two and a local to Central Florida, living only 1.2 miles away from Cinderella Castle. And as part of her proximity to the parks, you can probably imagine the Florida mom frequently visits the park with her family. However, this past Monday was a special day for DiNoto as her kids were finally returning to school, which she found to be the perfect excuse to hit up the most magical place in the world.

In a post on DiNoto’s Instagram, she wrote: “This, my friends. This is what you do after you drop your kids off on the first day of school. You get yourself a pin and you walk it around Magic Kingdom like some garden gnome on a world adventure.”

Disney Mom 101: First Day of School Edition ⁣⁣ ⁣⁣ This, my friends. This is what you do after you drop your kids off on the first day of school.⁣⁣ ⁣⁣ You get yourself a pin and you walk it around Magic Kingdom like some garden gnome on a world adventure.⁣⁣ ⁣⁣ Check the link in my bio or swipe in my stories for the full adventure. ⁣?⁣ ⁣⁣ #disneymom #disneyblogger #firstdayofschool

As most Disney fans know, the only way to celebrate at Walt Disney World is with a pin, which is exactly what DiNoto planned to do. DiNoto told Good Morning America, “After I grabbed the pin, I saw some of the Citizens of Main Street U.S.A. out and about and had the idea to have them hold the pin. They got such a kick out of it that I just kept going,” she said.

This adventure with the pin continued with a Walt Disney World custodian woman, Sleeping Beauty, and Fairy godmother. All of which, took the pin and posed for a picture for DiNoto’s Instagram.

DiNoto told GMA that the best reaction had to be with the Fairy Godmother, who she said was laughing so hard that she cried. “She reached into her sleeve and pulled out a bag of pixie dust and handed it to me and said, ‘This is for you and only you. You use it today.’ It was one of those moments of connection that is really what the parks are all about,” said DiNoto.

For those who feel bad for DiNoto’s kids, don’t fret–the mom shared that “They were excited for their first day at school.” And similarly, DiNoto was excited for “some time alone.” When the end of the day came, DiNoto returned to school to pick up her children and they all swapped stories of their days. Of course, Lisa’s was definitely the most magical of all.

What are your thoughts on this mother’s solo trip to Magic Kingdom to celebrate her children’s return to school? Let us know in the comments below!