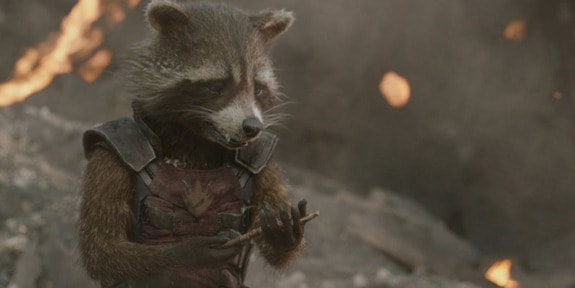 If “Avengers: Endgame” proved anything, it’s that Marvel Studios is amazing at breaking our hearts. We were forced to say goodbye to three of our heroes.

But just when you thought you could say “I love you 3000” without crying, it looks like there is now another character who will likely be killed in his next movie: Rocket. Here are three unsettling reasons why we might have to bid farewell to our favorite critter in “Guardians of the Galaxy Vol. 3”

Rocket has reached the end of his story arch

Like Tony Stark, Rocket has gone from a selfish, greedy character to one that is caring and wants to protect the ones he’s grown to care about. Like Agent Romanoff, Rocket has no past and no family. And like her, he also chose his family: the Guardians of the Galaxy. Now, it might be time to sacrifice himself for the ones he’s grown to love, just like Stark and Romanoff did in “Endgame.”

Death has already been surrounding Rocket

Rocket watched Groot die and then saw him get swept off in The Snap. In fact, after The Snap, Rocket and Nebula were the only Guardians left. He felt pain when Clint returned with the Soul Stone without Nat. He was there when Tony passed away. Perhaps it’s his turn to face death head-on in a way that is gloriously true to him.

James Gunn has often spoken about how he empathizes most with Rocket out of all the Guardians, so a director killing off his favorite character could add extra power and emotion to the scene. And since we got the “We are Groot” moment in Vol. 1, and the revelation that Ego killed Quill’s mom in Vol. 2–not to mention Yandu’s sacrifice shortly after that–there may not be a better move to draw shock and emotion.

On top of these reasons, Phase 4 of the MCU has always been discussed with the undertone that “anything can happen now.” But James Gunn has also stated that “Guardians 3” will not be in Phase 4. This means we have yet another epilogue and another transitionary story as a new generation of superheroes is about to be introduced, and another has been on its way out. Tony Stark is gone, Natashia Romanoff is gone, Vision is gone, and Steve Rogers is basically gone. We can only hope–if it is his time to go–that Rocket will be given the glorious exit he deserves.

Do you think Rocket is going to survive past Guardians of the Galaxy Vol. 3? Let us know in the comments!