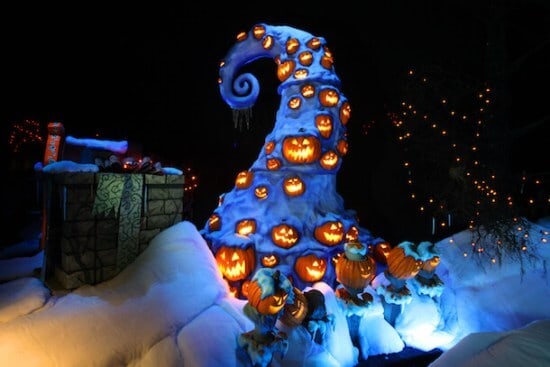 Disney theme parks are renowned for their thrilling thematic attractions. Hair-raising ride experiences, either seasonal or always around, bring boo-worthy excitement to a new level for Disney Halloween fun.

As Mission to the Moon and eventually Mars became dated delights, a true terror took over in 1995. ExtraTERRORestrial Alien Encounter was originally supposed to based on the sci-fi horror franchise “Alien.” Even though that never materialized this imaginative, immersive experience was a truly horrific experience in the best way. That is until it was replaced by the much tamer “Stiches Great Escape” in 2003.

New (for 2018) guests enter a crypt within Memento Mori cemetery to wind up in Halloween Town. Amazing animatronics, live actors (including Oogie Boogie, Sally and Jack) and immersive ambiance boo-tifully recreate environments from “The Nightmare Before Christmas” in this enchanting walk-through experience.

Within Disneyland Paris, Sleeping Beauty’s Castles offers guests the opportunity to roam the castle and surrounding grounds. Upon doing so, Sleeping Beauty’s story, or “Belle au Bois Dormant,” as she is called in France, can be witnessed – as told in a series of scenes, depicted in stained glass and tapestries. These scenes, along with access to castle parapets overlooking Fantasyland, are found on the second floor of the castle. Meanwhile on the ground level, and below, those brave enough to enter the “Taniere du Dragon,” will find themselves face to face with an awakened dragon who roars and breaths smoke.

During a visit to the scare factory, a seemingly innocent game of flashlight tag goes awry. Guests board specially equipped (with flashlights which act like shooting gallery devices activating ride elements) security vehicles, joining Mike and Sully and Boo in the darkened factory. Boo wanders off and must be found.

Disney’s Haunted Mansion materializes in a different land at each park which hosts the spirited attraction. In Paris, Phantom Manor is set in Frontierland, with ties to nearby Thunder Mesa (home to Thunder Mountain). Western themes haunt the attraction, including a nightmarish ghost town (in place of the graveyard in other versions).

Pirates of the Caribbean: Battle for the Sunken Treasure (Disneyland Shanghai)

Found within the Treasure Cove section of the Shanghai Disneyland, this high-tech pirate adventure is filled with creepy cool creatures and immersive amazements. State of the art special effects and familiar film franchise scenes take guests over and under the ocean on this feast for fans of the films. Of course, as with the movies, there are a few nods towards the classic Pirates of the Caribbean attraction from Anaheim, but even those come with a twist.

Japan’s hair-raising ride version of the Indiana Jones attraction from California pours on the creepy factor with scores of spooky skeletons, creepy crawlies in a much darker adventure.  Monsters, magic, and mishaps prove that tourism and foreboding temples don’t mix.

Ancient Peruvian ruins provide the backdrop for a thrilling roller coaster ride. A similar version of this coaster with cool creep factor exists as “Indiana Jones and the Temple of Peril” at Disneyland Paris.

A race through space on board a speeding coaster in the dark can be quite exhilarating on its own. Exterior enhancement (projected horrors) and subtle spooky changes to this classic coaster’s on ride experience (floating ghosts, surprise spirits, sinister new soundtrack) give it a ghoulishly great Halloween makeover.

At the end of Sunset Boulevard, a tall foreboding hotel stands as a testament to her former glory.  The Hollywood Tower Hotel, with its creepy Twilight Zone theming, begs for guests to drop in for a visit.