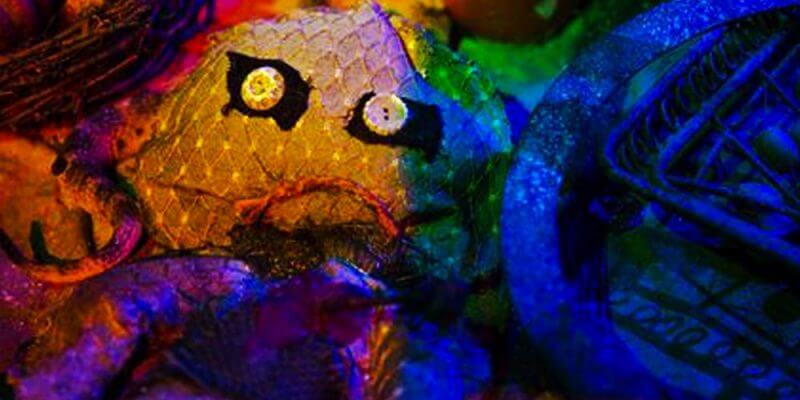 Just two weeks before the gates to Halloween Horror Nights 2017 are unlocked, Universal Orlando has fully revealed all the terrors that await within. Adding to the already-announced lineup of five IP-driven haunted houses are four original mazes, not based on anything but the insanity found within their creators’ brains.

USATODAY has given us a first look at these new haunted houses:

Born out of the recent Bayou of Blood scare zone comes Dead Waters. Sitting within a swamp lies the Voodoo Queen and her village filled with creatures and off-putting voodoo dolls. Dead Waters also features a partially-sunken paddle-wheeler, which will keep visitors off-balance as they wander through. Step onto a creepy farm haunted by menacingly tall scarecrows. The abandoned farmhouse in Nebraska has been ravaged by farmers’ plows, churning up “scarecrow guardians” who are out for revenge. Set in the 1980s, The Hive features vampires akin to the classic Nosferatu. Universal is taking everything that is “sexy, beautiful or cool” about vampires and destroying it, offering up “animalistic and vicious” creatures. Similar in aesthetic to the event’s fan-favorite Gothic haunted house, The Fallen is set inside a cathedral featuring plenty of winged creatures flying overhead. In addition to these four original haunted houses, the Orlando event will include ones based on “The Shining,” “American Horror Story,” the horrors of Blumhouse films, “Saw,” and “Ash vs Evil Dead.”

The popular show “Bill and Ted’s Excellent Halloween Adventure” will be returning – for one final year.

This year’s scare zones include ones based on “Trick r Treat” and “The Purge.”

Halloween Horror Nights 2017 kicks off on September 15 at Universal Orlando.