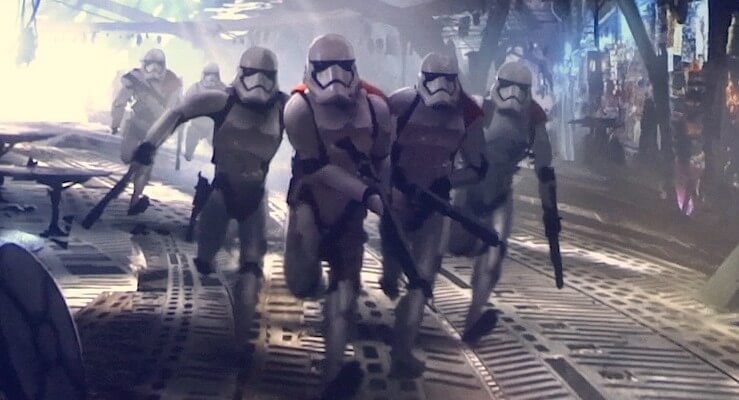 It’s been a wild and unpredictable D23 Expo 2015 as Disney has made theme park announcements more exciting than anything in the event’s history.

And some of the biggest announcements didn’t even come during the Walt Disney Parks & Resorts presentation, but as surprises during other panels, keeping fans on their toes throughout the 3-day event.

No doubt the official announcement and confirmation that Star Wars Land is coming to both Disneyland and Walt Disney World was the biggest, but there are many more reveals made, down to the small details easy to get lost in the shuffle.

To pull it all together, below is a summary of all the new Disney Parks details – big and small – revealed at the D23 Expo 2015.

Disney officially confirmed and announced plans to bring Star Wars-themed lands to Disney’s Hollywood Studios in Orlando and Disneyland park in Anaheim. Each park will receive a 14-acre land taking guests to a never-before-seen planet with two major attractions, one sending guests on a secret mission on the Millennium Falcon and the other putting them inside a “Star Wars” adventure face-to-face with the First Order from “The Force Awakens.”

In addition, more “Star Wars” entertainment is coming to both coasts.

Star Tours – The Adventures Continue will receive a new adventure featuring locations and characters from the upcoming film, “Star Wars: The Force Awakens.”

Star Wars Launch Bay will be an interactive experience taking guests into the upcoming film with special exhibits and peeks behind-the-scenes, including opportunities to visit with new and favorite Star Wars characters, special merchandise and food offerings. Star Wars Launch Bay will be located in the Animation Courtyard at Disney’s Hollywood Studios and in Tomorrowland at Disneyland park.

Jedi Training Academy is being reimagined with a new experience that includes new characters and a new villain to battle from the popular Disney XD series “Star Wars Rebels.”

Season of the Force is a new seasonal event, beginning early 2016, brings new experiences to both coasts. In Tomorrowland at Disneyland park, guests will explore the Star Wars galaxy with special entertainment throughout the land, themed food locations and more. Guests also will be thrilled to climb aboard Hyperspace Mountain, a reimagining of the classic Space Mountain attraction, in which guests will join an X-wing Starfighter battle. At Disney’s Hollywood Studios, guests will close out weekend nights with a new fireworks spectacular set to the iconic score of the Star Wars movies.

Announced as another expansion of Disney’s Hollywood Studios in Florida, a 11-acre land will “shrink” guests to the size of Woody and Buzz as they are surrounded by oversized toys that Andy has assembled.

Toy Story Land will feature two new attractions and one upgraded one.

Slinky Dog family-friendly roller coaster – All on the back of Slinky Dog, this coaster will take guests on a toy-filled adventure throughout the new land.

Green alien saucers attraction – The famous little green aliens from the movie will take guests around for a spin in their very own flying saucers. The music, lighting and sound effects add to the flurry of action, while “The Claw” looms over.

Toy Story Mania will expand with a third track to this popular attraction.

Fans got a closer-than-ever look at the World of Avatar coming to Disney’s Animal Kingdom along with exhibits and new details for Pandora. Director James Cameron and Imagineer Joe Rohde showed off the land to fans.

The World of Avatar will be part of the largest expansion in the park’s history, with floating mountains, a bioluminescent forest and the winged Banshees.

One of Pandora’s signature rides will be called Flight of Passage, an E-ticket attraction, the centerpiece of Pandora, allowing guests to soar on a Banshee over a vast alien world. The spectacular flying experience will give guests a birds-eye view of the beauty and grandeur of the world of Pandora on an aerial rite of passage. A boat ride is also in the works for the area, along with unique food offerings.

Kilimanjaro Safaris will also venture out after dark with new nighttime adventures next spring, where guests will travel through the African savanna amid the magically extended orange glow of the setting sun and discover two species new to the attraction: African wild dogs and hyenas. During a 60th anniversary Jungle Cruise presentation, Walt Disney World announced Skipper Canteen, a new restaurant for Adventureland at the Magic Kingdom themed to the popular attraction. It will have several unique dining rooms, including a “once-hidden secret meeting room of the famed Society of Explorers and Adventurers.”

At Disneyland alongside the Star Wars Launch Bay will be a reimagined Super Hero HQ, including meet-and-greets with super heroes like Captain America and Thor, as well the return of Iron Man Tech Presented by Stark Industries. Both experiences will be available for guests later this year.

At Hong Kong Disneyland, much more exciting movement is happening with Marvel as the Iron Man Experience attraction takes shape. Disney showed off a first look at ride footage for the simulator attraction as well as revealed the Iron Man costumed character. Stan Lee made a cameo appearance as well.

Set to open in 2016, Iron Man Experience will be the first Marvel attraction at any Disney park, taking guests on an epic adventure over the streets and in the sky above Hong Kong. The adventure will begin at the new Stark Expo where guests board the Iron Wing to take flight and battle Hydra alongside Iron Man.

Soarin’ Around The World

A new version of Soarin’ (over California) was announced for Walt Disney World and Disneyland (as well as overseas) called Soarin’ Around the World. It will send guests “flying” over natural landscapes and man-made wonders all over the planet rather than just California vistas. It will be coming to Disney California Adventure and Epcot.

A whole lot of “Frozen” is coming to Epcot and Disney showed off even more of how the Norway pavilion will be transforming in the coming months.

The Norway pavilion will be expanded to give guests the feeling of stepping into Arendelle with a new meet and greet featuring Anna and Elsa in the Royal Sommerhaus. A first look at the Sven animatronic that will appear in the Frozen Ever After ride was shown.

The D23 Expo 2015 put a big emphasis on Shanghai Disneyland, as Disney recently unveiled the majority of the attractions that will be featured in this unique park that’s opening in early 2016. A huge area of the Walt Disney Parks & Resorts pavilion is devoted to all the lands of Shanghai Disney Resort.

Imagineers walked fans through all the different attractions of the park, both in the pavilion and during a Walt Disney Parks & Resorts presentation.

During the Walt Disney Parks & Resorts presentation, a quick run-through of what’s coming to the overseas parks – Hong Kong Disneyland, Disneyland Paris, and Tokyo Disneyland. Nothing new was revealed for these, but it’s always good to get a summary, which included Tokyo’s expansions of Fantasyland (Alice in Wonderland area and Beauty and the Beast) and DisneySea’s Frozen area. At Paris, the 25th anniversary is approaching so some surprises should be expected. In Hong Kong, a new hotel is on the way – Disney’s Explorer Lodge.

In addition to all the new details and announcements for Disney theme parks, the Walt Disney Archives also presented a large exhibit of items from Disneyland’s past in honor of its 60th anniversary.

There’s no doubt Disney has a lot of exciting new attractions and entertainment planned for parks worldwide, none more highly anticipated than Star Wars. For a closer look at concept art and details, browse through all our D23 Expo 2015 articles.