Why Guests Actually Buy Disney Park Water - Inside the Magic 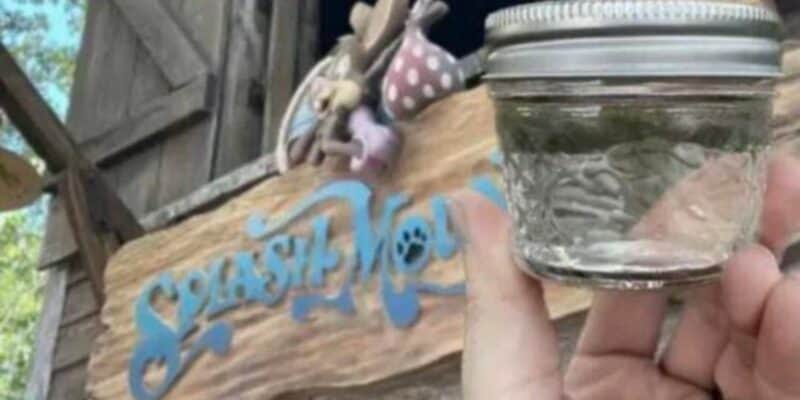 Disney fans have done some crazy things at the Parks, which is nothing new for those who’ve been a part of the fanbase. From scattering the ashes of a dead family member in the Haunted Mansion to getting frisky on Park property, some Guests have really pushed the limit when it comes to irrational behavior. One of the most recent stunts that have been circulating social media is Guests selling jars of water from the recently closed Splash Mountain, but there might be a method to that madness.

As observed in the tweet from @TheDis, Guests are selling  water from Splash Mountain’s flume as a form of memorabilia to fellow fans. While most will find this an odd practice, which it is, Disney fans have had a strange obsession with the Parks’ water long before the attraction was ever on the chopping block. Rides like La Gran Fiesta, Jungle Cruise, and especially Pirates of the Caribbean have won fans adoration for the smell of their water. It’s gotten to the point that there’s even a scented candle Guests can buy to replicate the experience. The question is why would they want to?

The same question was asked on a Reddit post just recently, and one user brings up an excellent point in the discussion. One of the biggest ways Disney works their immersive magic is by playing with a Guest’s sense of smell. They’ve even got hidden mechanisms scattered throughout the Parks to emit certain fragrances to trigger a sensory response from the Guests, that’s why Main Street USA smells like popcorn and ice cream and the Haunted Mansion smells older than it actually is. However, the case of Disney’s ride water happens almost entirely by accident, as Guests aren’t smelling the dampness of the water per se, but the chemical used to clean it.

Disney primarily relies on bromine to clean the water that flows through its attractions, and it has a distinct odor similar to any cleaner like chlorine or bleach. u/youngvolpano goes into detail with her explanation as to why Disney’s water is such a big deal to some fans as they write,

“For most people, Disney is they only place they encounter bromine, so that triggers a unique memory for them that immediately screams Disney. So it’s sort of become a cult thing that Disney people like Disney water. And for some it’s as simple as enjoying the smell, but for others they over exaggerate this idea that Disney fans are supposed to like the scent, and take it way out of control for clout by posting these outrageous videos on tiktok for views.”

The use definitely isn’t wrong on the TikTok clout idea, and Guests have certainly done worse in the name of social media views, but what might be happening here is a hybrid of mentalities. On one hand, it might very well be over the memory-triggering scent of the treated water. On the other, it might also be a shameless attempt at trying to make a buck on fans’ nostalgia by going to ridiculous extremes. Either way, this is something that will definitely earn some attention, both for good and bad. We might be looking at a Splash Mountain memorial candle in the near future.

Do you think Guests are losing their minds over bromine? Tell us in the comments below