Why Adults Love 'Bluey' - Inside the Magic 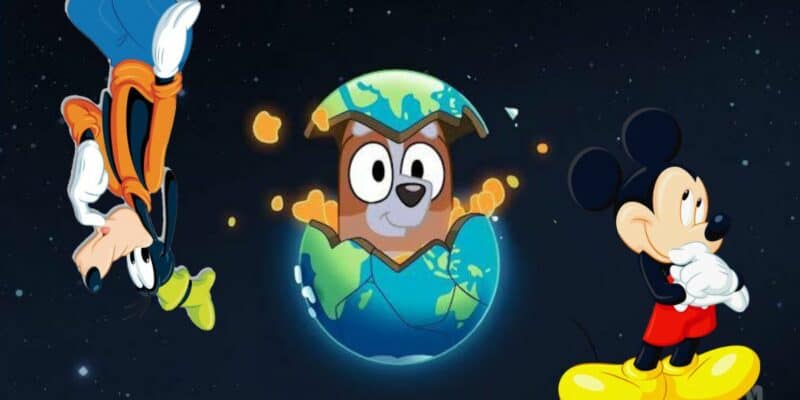 Disney has supplied its fans with an endless entourage of beloved animated characters. From Oswald the Lucky Rabbit to the family Madrigal that call La Casita home, the studio has had no shortage of enchanting entities of the large and small screen. To say that everyone has a favorite Disney character wouldn’t be a stretch of the imagination. Both the young and the young at heart have been delighted by Disney’s animated cast, but a family of colorful canines from a certain Australian series has been slowly growing in popularity with more adult viewers than its intended audience.

Bluey is an Australian children’s show brought to Disney+ and produced by Ludo Studios out of Queensland. The show has been just as big of a success with American audiences as it has with its native Australia, and both kids and their parents have fallen in with the beloved Heeler family. For those who haven’t seen it, Bluey involves the titular Bluey, her sister, her mom, and her dad living in an all-dog version of Brisbane as the family and their friends engage in imaginative play and exploration. The characters are all engaging and surprisingly more realistic than most modern kids’ shows can be.

What truly separates the show from something like Paw Patrol or even more appreciated programming like Bear and the Big Blue House is the amount of gravity and reality that the series covers. As described in the TikTok above from @isip0ki, the show covers a wide variety of subjects that simply wouldn’t go over well with other shows directed at younger viewers. Scenarios like Peppa Pig discussing divorce or Doc McStuffins talking about mental traumas are not only ridiculously out of character, they’re outright jarring. However, Bluey manages to cover deeper topics through creative ways that don’t pander to or belittle its younger viewers. Characters die, deal with old age, mental trauma, divorce, and conditions like ADD/ADHD and disabilities, all while being presented in a family-friendly manner that doesn’t diminish their presence. While it’s impressive that a kids show can talk about all these topics in the way that it does, what’s really remarkable is how the adults in the room are growing fond of it.

Bluey might be meant for viewers around the age of six, but it’s the parents and grownups in their lives. Parents everywhere know the absolute dredge of TV shows their kids love but they absolutely despise. Bluey is not the case. In fact, the argument can be made that there are more adult fans of the show than there are kids, but why?

The answer might lie in three different factions of Bluey fans: those who watch with their children, those who watch it for their inner child, and those who recognize the deeper meanings behind the episodes.

u/Freon424 gives an apt summary of the show’s effect when they write on Reddit,

“If you would have told me a children’s television show could make me bawl my eyes out in just 7 minutes, and do it on a regular basis, I’d have told you no chance in hell before Bluey. This show highlights every thing you remember being awesome about early childhood. While simultaneously showing you the other side of it from the parent’s perspective. You will not find a better cartoon that is more authentic to the family dynamic of having two small children.”

A recent post in the show’s Reddit thread asked the adult fans why they watched, and many different variations of fan came out to share their two cents. Parents, young adults, and beyond all had something to contribute, but they can essentially be catagorized into the three previously mentioned camps. The first, and perhaps most obvious secondary audience for the show, consist of the parents of kids that are watching Bluey and Bingo go on their adventures. Many parents have fallen under the influence of the show’s intoxicating and infectious nature.

“Because it’s the one show my child likes that I also like. I like the messages it’s teaching him, I love the sense of care and genuine warmth the characters show, and I love that it focuses on imagination games. And it makes me laugh!

“Because my little one is in the socks stage and watching bluey both helps calm her down and helps me to know both how to handle later problems in a more appropriate way than how I’ve seen other parents deal with similar situations.”

“I also love the show and relate to it a lot myself. I cry at watching Camping because I had the exact same situation happen to me as a kid and remember it fondly.”

“Because you as a parent can relate 100% to every episode.

On that note, another thread goes into more detail on how exceptionally relatable the parents are to those out in the audience. In a world where most adults in young kids’ cartoons are depicted as bland cardboard characters, buffoonish caricatures, and sometimes only a pair of legs, Bluey’s grownup cast have much more of a realistic quality to them in their actions and their dialogue. In a strange way, it’s almost like there are two shows going on at the same time. One portion is the kids and their imaginative outings, the other is the adults and their reactions and relationships. Two dads have an implied talk about vasectomies, Chili confronts the subject of her elderly father’s health, and Bluey and Bingo assist in helping their uncle Rusty find love. All these are plot elements and points that aren’t shied away from for the sake of younger kids in the room, and they help establish the show’s identity even better. When stacked up against other shows parents might call insufferable like Blippi, Cocomelon, and Paw Patrol, Bluey isn’t just tolerable for parents, it’s bingable.

Of course, not all Bluey fans have to be parents. On the contrary, many fans have given themselves over to Bluey’s bliss as a sort of inner-child stimulation or healing. A child’s perspective is one of the most unique and wondrous in existence, and to revisit that point of view certainly has its benefits. It’s why characters like Winnie the Pooh have had such a mass appeal for decades.

Many fans of the series have found a therapeutic quality to its warm and loving nature. Reddit user, u/Viitsm, writes,

“It’s so sincere. Nowadays, a lot of shows cover themselves with as much irony as possible, or distill manufactured, hollow, saccharine moments. Meanwhile, the emotional events in Bluey never feel inauthentic, or sardonic, it’s always genuine in a way that’s accessible to anyone.”

“I like the show because it helps to be a comfort in a quite stressful life. Bluey is just always there if I need some time to relax or even if I need a good cry (cough, sleepytime.) But yeah. It helps me when I feel stressed.”

In short, Bluey represents a lost, friendlier, and happier time for these fans. While Disney+ is home to several more adult-oriented shows, sometimes its nice to lose oneself in something soft and sweet. Maybe even play a little “Featherwand” on occasion too?

The third type of Bluey fan is where things start to get unexpectedly complicated. It’s been previously stated that the series dives into some subject matter not normally seen on kids shows. Topics like death, aging, pregnancy, divorce, relationships, and other such matters are all addressed in mature yet understandable ways. However, there are deeper meanings in some of the shows most popular episodes, some of which practically beg for a psychological deep dive.

TikTok user, @luckyleftie, has an entire channel dedicated to the further psychological exploration of animated media, and her takes on Bluey serve to cement the show as being more than some simple kids show. Take a look at her interpretation of the episode “Space.”

An episode about a group of Bluey’s classmates playing astronauts doesn’t sound like the premise for a plot about repressed trauma, fear of abandonment, or emotional closure. However, that only proves how much maturity and creative storytelling there is behind this show. Not only does this psychological element pique an adult’s interest in the series, but it also grants adult viewers a sort of lens into a child’s psyche through the realm of imaginative play. “Space” is only one episode that takes a turn into the surreal, as “Sleepytime” deals with similar visuals and themes. These episodes and others like them show that Bluey doesn’t just need to be watched, but maybe even studied.

Related: 10 Educational Shows to Stream on Disney+ While Your Kids at Home

To say that Bluey is a show strictly meant for young children isn’t just wrong, it’s borderline insulting to the creators and medium. The term “family show” is often used as an umbrella  word to describe a show mainly directed at a younger audience, but that’s not the case for Bluey. The series is one of those rare and beautiful creations that transcends audience demographics and becomes something an even larger audience can enjoy. Bluey is as mature and complex as it is wholesome and imaginative, and both kids and adults can benefit from an episode or two.
What are your thoughts on Bluey? Tell us in the comments below!