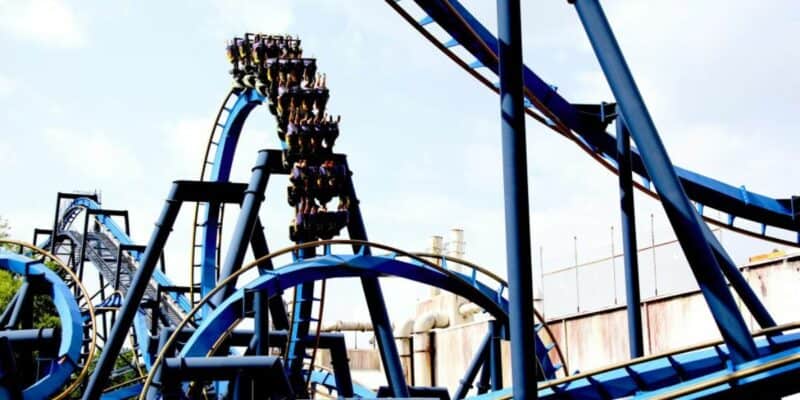 Today, one of the Six Flags theme parks, Six Flags Over Georgia, released news on Twitter about a new, record-setting roller coaster coming to the park in 2023:

Just announced at @aceonlineorg No Coaster Con! Georgia’s first single-rail coaster, and Georgia’s ONLY racing coaster, manufactured by @SkylineAttrax, is coming to Six Flags Over Georgia this year! 🎢

Just announced at @aceonlineorg No Coaster Con! Georgia's first single-rail coaster, and Georgia's ONLY racing coaster, manufactured by @SkylineAttrax, is coming to Six Flags Over Georgia this year! 🎢 pic.twitter.com/mfZN4VlPk0

This news was long-anticipated for fans, but those on Twitter may not have been completely blindsided by this announcement, as Six Flags Over Georgia posted a Twitter thread yesterday teasing this news:

It’s always “when are you announcing a new ride” and never “how’s the marketing team doing?” 🙄

For the record, we’re doing great.
But you might want to keep an eye on this account tomorrow. 😉

For the record, we're doing great.
But you might want to keep an eye on this account tomorrow. 😉

As Six Flags Over Georgia mentioned on Twitter, this announcement was made at the ACE No Coaster Con. This convention was held earlier today at the Hyatt Place O’Hare Airport in Rosemont, Illinois, and was a place for ACE members, guests, and other amusement park industry leaders to learn more about and discuss roller coaster news through presentations and other engaging opportunities.

This convention was presented by ACE, which stands for American Coaster Enthusiasts. Here is a description of this group’s mission, according to @aceonlineorg’s Twitter bio:

ACE is a non-profit organization with 6,500+ members dedicated to the preservation, promotion, appreciation & safe enjoyment of roller coasters.

At this time, we don’t have much information about the new roller coaster, but here is what we do know, per the announcement graphic posted on Twitter:

This attraction will be Georgia’s first single-rail coaster, as well as the only racing coaster in Georgia. The track will be a dual-track design with 12 crossovers and more than 1,000 feet of combined track length. There will also be an innovative LED track lighting package. Additionally, riders must be 36 inches tall to ride this coaster.

Six Flags Over Georgia mentioned that the roller coaster will be built by Skyline Attractions, which is an Orlando-based firm that designs and manufactures amusement rides. Some of their rides include wooden roller coasters, innovative new roller coasters, and family-friendly flat rides.

What do you think about this new announcement? Would you want to ride this coaster?