"I'm Never Forgiving Netflix", Fans and Industry Vow to Cancel Subscriptions In Support of Axed Show - Inside the Magic 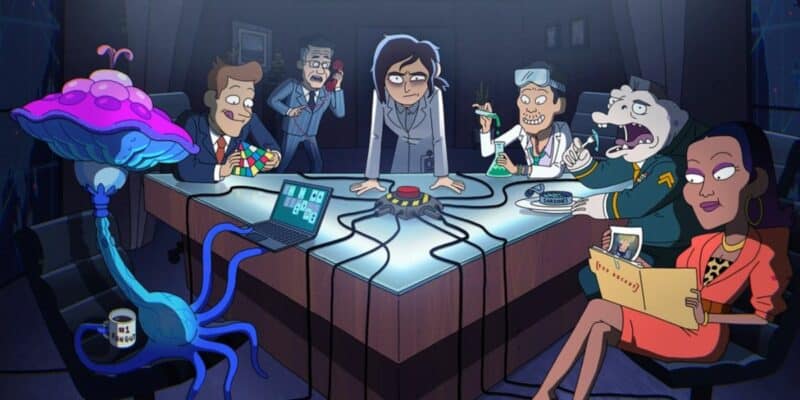 A recently canceled Netflix original series has both the industry and its massive fanbase rallying behind them.

Just a couple of days ago, a Netflix showrunner revealed to the world that their Netflix series had been unceremoniously cut — after already receiving the greenlight for a second season. This devastating news was met with the creators’ severe upset and disappointment in the streaming service — but no one was prepared for the sheer outpouring of love and support that the lost series received.

The Netflix original series Inside Job (2021) follows tech genius Reagan Ridley (Lizzy Caplan) in a world where the weird and wild conspiracy theories heard on the internet and in popular media are 100% real. An American shadow government organization that secretly manages the world behind the scenes called Cognito Inc. sits at the center of this show’s universe. Fratboy yes-man Brett Hand (Clark Duke), public relations officer Gigi Thompson (Tisha Campbell), dolphin-man hybrid and military advisor Glenn Dolphman (John DiMaggio), narcotic-loving biochemist Dr. Andre Lee (Bobby Lee), psychic mushroom from Hollow Earth, Myc Celium (Brett Gelman) are Reagan’s coworkers at Cognito Inc, and the show follows their exploits as they deal with the fate of the world. Randall Ridley AKA Rand Ridley (Christian Slater) is Reagan’s father and disgraced former Cognito Inc. founder/CEO, and her romance novelist mother Tamiko Ridley (Suzy Nakamura) frequently put Reagan in the middle of their squabbles. This group of strange individuals and nutty scenarios is juxtaposed with The Office and Archer-esque workplace sitcom-style attitudes, making it a truly unique “Only on Netflix” series that garnered its own, rather significant following.

Though it has its fair share of raunchy jokes, Inside Job delves into several deep and thought-provoking concepts, as well as dealing with very real-world and emotional problems. The series is a quirky animated sci-fi workplace comedy aimed at adults, created by ex-Disney and Pixar artist, and Gravity Falls (2012), Regular Show (2010), and Disenchantment (2018) alumnus, creator Shion Takeuchi. Executive produced by Gravity Falls showrunner Alex Hirsch and Bojack Horseman (2014) director Mike Hollingsworth, Inside Job had ties to other successful shows within the industry.

Now, its industry ties (and humongous fanbase) are coming out in full force to defend its sudden and unfair axing from the platform — and declare their disapproval with the streaming giant — with a tweet that has already garnered a whopping 221K likes at the time of writing.

After Takeuchi uploaded their original post about cancelation of Inside Job Season Two, the initial reaction from the internet was immediate shock and upset. As @catjeans exclaimed:

(in image) I’m heartbroken to confirm that Netflix has decided to cancel season 2 of Inside Job.
Over the years, these characters have become real people to me, and I am devastated not to be able to watch them grow up. Reagan and Brett deserved to get their ending and finally find happiness. And I would have loved to even be able to share what was in store with you all.

To everyone who watched, thank you for coming along on the ride. Even though I’m sad, it helps to know that there’s people out there who cared just as much about these characters as me. 💖

(in reply) @catjeans: ARE YOU KIDDING I HAVE AN EMOTIONAL ATTACHMENT TO THIS SHOW PLEASE NO 😭

And then other famous industry creators chimed in — including well-known Disney creator and Gravity Falls showrunner, Alex Hirsch, who chips in his undying support:

Shion had an awesome ending in store for these characters. I’m so sorry that she won’t get the chance to share it. Grateful to have had the chance to help on on one of my best friends shows, for however briefly 💔 #FriendshipIsTheDeepestState

Shion had an awesome ending in store for these characters. I’m so sorry that she won’t get the chance to share it. Grateful to have had the chance to help on on one of my best friends shows, for however briefly 💔 #FriendshipIsTheDeepestState pic.twitter.com/vF2YmDSQga

Another industry showrunner, Dana Terrace, who worked on various Disney projects including Gravity Falls, DuckTales (2017), and her very own show The Owl House (2021) (that recently also got unceremoniously canceled by Disney under Bob Chapek’s rule — she was not happy about that) chimed in with her support. Making it extremely clear that she was done and ready to cancel her Netflix subscription, she tweeted:

The following may contain language unsuitable for younger readers.

Time to cancel my NF sub if they’re not gonna gimme anything to invest in. What the fuuuuuck

Time to cancel my NF sub if they’re not gonna gimme anything to invest in. What the fuuuuuck

Many fans chimed in as well, jumping on the anti-Netflix bandwagon — with perhaps fewer likes than these big-name creators, but with an equally valuable Netflix subscription now lost. @LuzNation_ said:

Fr, i canceled mine i while ago. They are taking the best shows off for no reason!

Fr, i canceled mine i while ago. They are taking the best shows off for no reason!

The trend of criticizing Netflix’s poor decision-making with regards to the shows it greenlights continues, with @Swaige__ commenting:

6 SEASONS OF FUCKING BIG MOUTH BUT NO MORE INSIDE JOB HELLO???

6 SEASONS OF FUCKING BIG MOUTH BUT NO MORE INSIDE JOB HELLO???

Another incredible animated show cancelled because, why? Because these exec heads hate joy in cartoon form? So frustrating

Another incredible animated show cancelled because, why? Because these exec heads hate joy in cartoon form? So frustrating

Just taking a scroll through the outraged reactions on social media already gives a fair idea of the intense levels of upset that fans and fellow industry leaders feel at the loss of this show. With the ever-shrinking Netflix library, coupled with their massively unpopular changes to pricing, shared passwords, and ads, perhaps The Walt Disney Company will grow their media empire even larger as people abandon en masse.

Is this a portent of doom, signaling the expected end of Netflix? Will they be able to recover their losses if this trend continues? Looks like we’ll have to stay tuned to find out.

What do you think about Inside Job being cut, and Netflix’s future? Share your thoughts in the comments below!