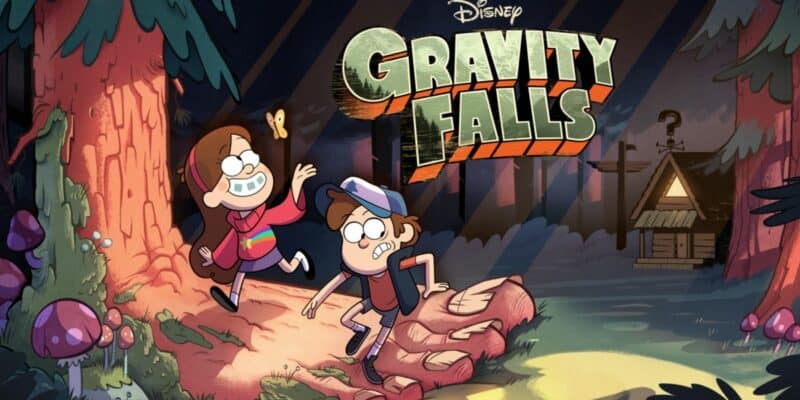 Last week, the show’s creator, Alex Hirsch, took to Twitter to celebrate the event with Gravity Falls‘ extremely large, passionate, and loyal fanbase. Releasing a series of tweets that showed sneak peeks of the show’s creation and just generally reminiscing, Hirsch began the 10-day retrospective countdown with the following tweet, which garnered almost 202k likes at the time of writing:

It’s crazy to believe it’ll be 10 YEARS this month since I first dropped these twins off in Gravity Falls, Oregon. Happy #10YearsOfGravityFalls to every fan who has taken the strange trip with us 🌲

It’s crazy to believe it’ll be 10 YEARS this month since I first dropped these twins off in Gravity Falls, Oregon. Happy #10YearsOfGravityFalls to every fan who has taken the strange trip with us 🌲 pic.twitter.com/T95NztCYpV

Updating the fans with a moving (literally!) tribute from creator Ian Worrel, who helped develop the look and style of the show’s main setting — ‘Grunkle’ Stan’s tourist trap Mystery Shack, in the woods of Gravity Falls, Oregon — which amassed a casual, almost-305k likes:

Hirsch credited Worrel, showing screenshots of their discussions from 2009:

This incredible tribute created by Gravity Falls Art Director/actual living wizard Ian Worrel. (iworrel on IG!)
Ian is like the mythical Paul Bunyan who carved the mountains & trees of Gravity Falls with his mighty cintiq pen. Look closely…you’ve seen his name before…

(continued)
Here’s the FIRST EVER Email I sent to Ian describing the Mystery Shack and his first ever take on it, back in 2009, while I was still working on my pitch. From day 1 he nailed the vibe

Here’s the FIRST EVER Email I sent to Ian describing the Mystery Shack and his first ever take on it, back in 2009, while I was still working on my pitch. From day 1 he nailed the vibe pic.twitter.com/xanDds9gfl

If anything, it’s clear that Gravity Falls has made a significant and lasting impact, with so many people remaining invested until now — who all ostensibly hold good memories and fond nostalgia for the animated franchise.

Gravity Falls and the Disney Channel: A History

When did Disney begin airing animated shows on TV?

The Walt Disney Company began its first foray into television in the 1950s — with several Christmas specials and their anthology series, The Wonderful World of Disney which ran from 1954 to 2008, beginning its life as Walt Disney’s Disneyland (1954–1958) and Walt Disney Presents (1958–1961).

Under Michael Eisner as CEO of the Walt Disney Company, The Walt Disney Television Animation department was started in November 1984, which began creating shows to be aired directly to the platform.

The Disney Channel is (or more accurately now, was) the flagship subscription television property of Disney Branded Television. It exploded in popularity with younger audiences, making Disney Channel Original Movies (DCOMs) well into the 2010s and beyond, remaining relevant until the decline in viewership thanks to the advent of on-demand streaming service, Disney+, and the subsequent move away from cable television.

Disney Channel launched the careers of many stars, including those of NSYNC’s Justin Timberlake, Christina Aguilera, and Britney Spears, from their appearances on Mickey Mouse Club (1955-1996), and more recently, Zendaya — MJ in the Marvel Cinematic Universe (MCU).

The popularity of the 2000s DCOM franchise has proved its staying power even today. The High School Musical movies (2006-2008) created cultural talking points when they aired, turning Zac Efron (Troy Bolton) and Vanessa Hudgens (Gabriella Montez) into household names back then. In 2019, the franchise even got soft-revived into the new Disney+ Original, High School Musical: The Musical: The Series, starring Olivia Rodrigo (Nini Salazar-Roberts) and Joshua Bassett (Ricky Bowen).

Alex Hirsch, a graduate of California Institute of the Arts (CalArts), was at the university when he turned down DreamWorks founder Jeffrey Katzenberg because he wanted to work for Disney.

Inspired by animated comedies like The Simpsons (1989-present) that had multi-generational appeal, Hirsch pitched his new show — with the storyboard written and drawn entirely on post-its — to Disney. It was for an animated TV series for younger audiences named Gravity Falls, inspired by Hirsch’s own childhood growing up, and his close relationship with his twin sister.

To my forever buddy @_AlexHirsch: Happy birthday, brother! And hey, thank you for Gravity Falls. I never could have expected our childhood to be immortalized in such a way, and that it would touch so many people, but damn what a gift. #10YearsOfGravityFalls

And hey, thank you for Gravity Falls. I never could have expected our childhood to be immortalized in such a way, and that it would touch so many people, but damn what a gift. 💜🙏🏼 #10YearsOfGravityFalls pic.twitter.com/gX1aZQpAVO

Hirsch’s dreams came true when Disney picked up the show, commissioned the pilot, and soon after, allowed Hirsch to hire his own team to begin creating the series.

How popular was Gravity Falls?

Gravity Falls quite quickly grew a massive and dedicated fan culture, and initiated a shift in how people treated TV and animated cartoons that were “for kids”.

Alongside the family-friendly premise of two kids spending a summer in a new-but-strange town, the show featured darker themes of myth, monsters, hidden codes, and secrets, as well as cryptids and urban legends. People took the show seriously, and it became a cultural touchstone that spawned everything from cosplay at fan conventions to fan art, writing, and music.

Fans all over the world remain active even 10 years later, with Sara Ott on Twitter recently sharing a tattoo of their “Bill Cipher Zodiac”, featured prominently on the show, that Alex Hirsch himself retweeted:

The show’s (and Hirsch’s) penchant for hiding clues about future characters and events resulted in Gravity Falls itself being peppered with easter eggs — that fans spent days, months, and sometimes, even years working together in an attempt to decipher.

The Cipher Hunt was an international Alternate Reality Game (ARG) and scavenger hunt created by the show and teased at the series finale, resulting in fans banding together to decode messages and unlock clues, in search of a statue of the show’s antagonist — the inter-dimensional demon, Bill Cipher — getting people to look for the “treasure” out in the real world.

This longevity led to Disney publishing a multitude of spin-off books, albums, and merchandise to feed the fanbase that was always hungry for more — just this year, a vinyl soundtrack celebrating the 10th anniversary, produced by iam8bit, Walt Disney Records, Hirsch, and composer Brad Breeck was announced — and sold out extremely quickly.

Why did Gravity Falls work?

Full of inside jokes, a unique sense of humor, and an intriguing concept, the animated series about 12-year-old twins Dipper and Mabel Pines being shipped off to live with their tourist-trap-owning Great Uncle ‘Grunkle’ Stan for the summer, resonated with audiences of all ages.

It had both a grand overarching, long-form mystery, plus an easy to get into, “Monster-of-the-Week” format.
Gravity Falls met the criteria for entertaining a multi-generational audience — something Disney has excelled at since the beginning of the company’s inception, and something Walt himself was passionate about.

All the hidden secrets also gave fans something to bond over, puzzles to decode and possible future content to discuss, over a long period of time — thus keeping it in the audience’s heads and within the cultural zeitgeist.

Up Next: The Future of Disney TV Animation

Will we see another Gravity Falls?

With the conclusion of Dipper and Mabel Pines’ (extremely eventful) summer back in 2014, the Disney Channel had begun searching for another animated franchise along the same vein.

The Owl House (2020) was greenlit alongside Amphibia (2019) by Disney back in 2018, and it seemed to be a spiritual successor to Gravity Falls in many ways — its focus also surrounding myth, monsters, and magic, along with similar themes of fantastical worlds and being a stranger in a strange land. Adding to the Gravity Falls connection, The Owl House is created by Dana Terrace — a Gravity Falls alum and storyboard artist herself, who is also known for working as a director on Disney’s animated DuckTales (2017) reboot.

However, not too long ago, it was announced that The Owl House‘s third season would be its last, and also cut short — a Disney executive decision that Terrace hinted might have to do with LGBTQ+ themes present on the show.

In prior coverage, we’ve discussed the plethora of brand-new and “diverse”, animated Originals coming to Disney+, alongside the cancellation of older shows “less suited” for a streaming service.

These new Disney+ shows that have been greenlit and renewed are very different in tone from both Gravity Falls and The Owl House. They are quicker-paced, easier to consume, and aimed at younger audiences. A majority of them seem to trend a lot lighter or are anthology-style — further iterating to audiences that long-form, serialized TV formats might be a relic of the past.

That is, at least to the Disney Execs of 2022. Perhaps it’s just easier to deal with these types of shows long-term — although they might have a shorter “shelf-life” overall.

One last treat. Ever curious about the fights I had with the censors on Gravity Falls? I probably shouldn’t share this buttttt here are some REAL NOTES from DISNEY S&P and my REAL REPLIES. You are not prepared #10YearsOfGravityFalls

One last treat. Ever curious about the fights I had with the censors on Gravity Falls? I probably shouldn't share this buttttt here are some REAL NOTES from DISNEY S&P and my REAL REPLIES. You are not prepared #10YearsOfGravityFalls pic.twitter.com/EioKU8gIJJ

It’s clear that Gravity Falls‘ myth and monsters always had the potential to feed into “Satanic Panic”-style reactions from over-concerned parents — while the shows on Disney animation’s horizon definitely surround less… controversial themes, and would be able to guarantee good optics from the get-go.

Watch episodes of Gravity Falls and The Owl House here and here, on Disney+.

What did you think of the show? Do you miss old Disney programming? Share your thoughts below!