How Rey Could Be Retconned In 'Star Wars' - Inside the Magic 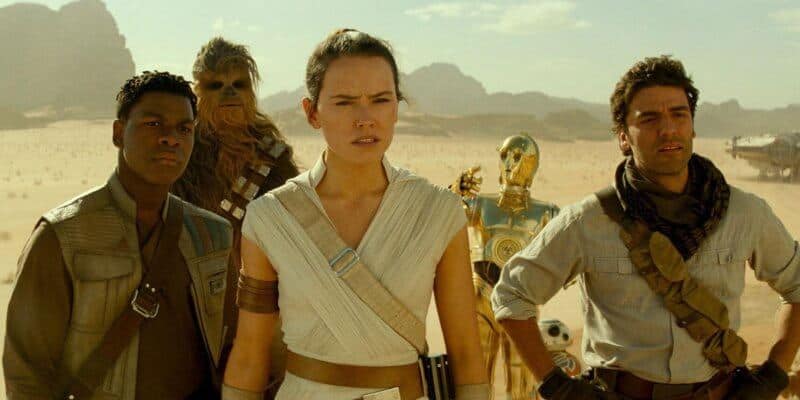 Daisy Ridley’s Rey Skywalker is a character that fans have mixed feeling about.

The Sequel Trilogy got her learning force abilities way faster than Luke Skywalker and allowing to use abilities like Force Heal, which most Jedi never could do. Qui Gon Jinn really wished that Obi-Wan had known that skill right before he died, but it was not something most Jedi knew about.

In Star Wars: The Rise of Skywalker (2019), Kylo Ren and Rey use this ability almost instantly without realizing it, which makes fans angry. In the end, it was because of their Force Dyad and that Rey is related to Palpatine.

Rey is an orphan. Her parents abandoned her on Jakku as her family flew away. She waited for them every day, working as a scavenger until they returned. The problem was that they didn’t come back. After years of nothing, Rey finally ends up leaving the wreckage planet to join Finn on an adventure across the galaxy to learn who she is and fight for freedom with the Resistance.

Her abilities with the force became more apparent, and she survived her first duel against Kylo Ren with no training at all. Rey then went to see Luke Skywalker and was trained briefly by him and was taught three lessons. She went from there to confront Kylo Ren and Snoke and ended up saving the day with Kylo before his fall to the Dark Side led the two to break Anakin’s Lightsaber in half.

Why Shadow of the Sith Matters

“Shadow of the Sith” by Adam Christopher explores how Luke and Lando chased after Ochi of Bestoon as Luke feels the presence of the Dark Side lurking around him. His tasks lead him to find a family being hunted by Ochi, which leads fans to understand more about why Palpatine was after Rey.

Dathan and Miramir, Rey’s parents, were afraid that Palpatine would kidnap their daughter, and they would never see them again. This led to both of them leaving Rey at Jakku so that Palpatine couldn’t find her. Dathan was a strand cast, a clone of Palpatine with no force abilities, but his daughter was a force user leaving the Emperor to become invested in claiming Rey for her powers. One odd thing about the novel is that Dathan and Miramir never state that the child is biologically theirs.

How Rey Could Be Retconned

If Dathan is a strand cast, it doesn’t make sense that he would give his child force powers. Star Wars right now allows this because it made more sense for Dathan to be a genetic clone of Palpatine and not his real son, but that didn’t reasonably explain everything.

It makes way more sense that Dathan and Miramir would adopt a child because they would be scared to have their own child in case it was force-sensitive to realize that Rey was actually force-sensitive once Palpatine grew interested in Dathan once again.

Since Palpatine is breaking the Rule of Two and not having an apprentice, it would make sense that he would want Rey to take over for him so his bloodline still exists because Dathan and Miramir knew if they told Palpatine otherwise, it wouldn’t stop him from kidnapping the child. At the moment, any force user would be a threat to Palpatine, so he would want his legacy protected.

With Luke believing he died, it was easier to allow the Jedi to roam the galaxy, not knowing about his strand casts or other projects with cloning to avoid any suspicions, which is why Rey would be left on Jakku in either situation.

Why It Matter For Star Wars

Star Wars has a lot of retcons, but this one would benefit the Sequel Trilogy in a few ways. For starters, Rey is not related to Palpatine and won’t hurt the Force Dyad as she could be a force user who they raised. Palpatine would sense the force connection and assume it’s his granddaughter. He doesn’t care if Rey is actually related or not, as he needs a force user to consume their life force.

Rey’s history doesn’t have to explain most of the Sequel Trilogy actions as she doesn’t have to be a Skywalker or Palpatine. The Skywalker Saga cares about lineage for the Skywalkers, and Kylo Ren is the last part of the lineage, not Rey. Even if Lucasfilm still calls her Rey Skywalker, then it could be more of a remembrance of the good in life with people like Leia and Luke.

This change might appear small, but it could open up more stories as Palpatine could need the life force of any force user, so there might have been more Jedi who died at the Emperor’s hands and fans had no idea. If this happened, Exegol might’ve had more history, as Palpatine would’ve wanted those rituals done in privacy rather than allowing outsiders to know their purpose.

It could also explain what happened to the Inquisitors, as they might’ve been killed off for learning Palpatine’s secret and trying to take Exegol for their own ambition. While Rey’s story seems to be complete, Lucasfilm will probably continue her story, and it would be interesting for her to have a family outside of Dathan and Miramir as it would disconnect Rey from Palpatine.

If they wanted to, Rey’s whole lineage could be reworked or just left alone to help bolster Palpatine’s credibility for being to survive and be the main villain in Rise of Skywalker. No matter what, fans won’t be happy with Rey’s ability to use the force so easily and quickly. Even after JJ Abrams made her a Palpatine, it didn’t help fans with their frustrations with the story.

Some fans want the entire Sequel Trilogy retconned, and in some ways, it can happen, but it won’t happen anytime soon. Star Wars has distanced itself from the trilogy for the past few years but stayed close to it, with content like The Mandalorian being set between the Original Trilogy and the Sequel Trilogy.

Do you think Rey should be related to Palpatine? Let us know what you think!