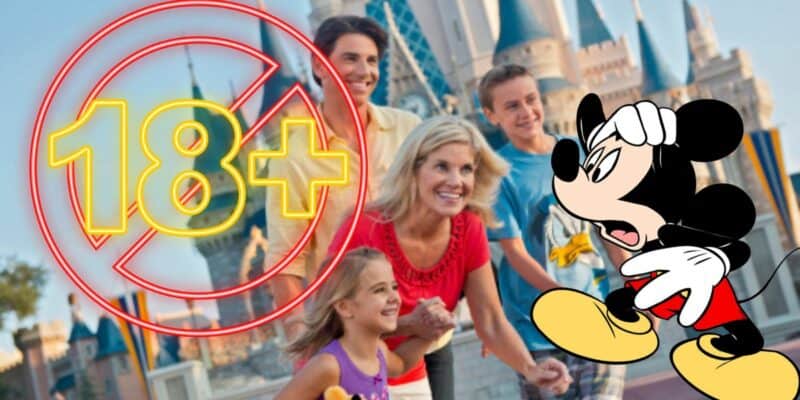 If you’ve been paying attention to the recent out tour of reports of negative guest behavior at the Disney Parks, you undoubtedly already know that things have gotten from bad to worse. For some bizarre reason, there has been an increase in unruly visitors doing everything from committing minor in fractions like smoking on the grounds to exposing themselves on the Walt Disney World Skyliner. Simply put, it’s gotten to the point that Disney has started to take disciplinary action against Guests who violate their courtesy policy.

Of course, it’s not just Disney that’s reporting these unsightly incidents either. Many dedicated Disney fans have already taken the social media with their horror stories of Guests behaving badly, some of which deserve an immediate expulsion from Disney property. Flashing the crowd from a public transport is one thing, but some of the reported activity should have more than just security called.

Vlogging and streaming have recently been banned from certain Disney Parks due to being an obstruction and often a safety hazard, but some Guests have provided details about how they spoil the show. u/bunifacr writes,

“Vloggers and live streamers (some, not all) who won’t shut up in rides. They most likely have ridden all the rides yet they act like it’s their first time riding. Yes, I have been on rides with them. It’s not the worst behavior but it can ruin your ride experience.”

“Saw a guy standing up on the front of the boat on Gran Fiesta Tour in September. Rest of his group was yelling and videoing (in support, not telling him to stop being an idiot). Didn’t take long for the boats to stop running – we assume they were removing the party from the ride and/or Park.”

In the grand scheme of things, most vlogging and streaming Guests are more annoying obnoxious than they are realistically dangerous . However, there have been some reports of Guest behavior that are much more repulsive and repugnant. While there’s always the occasional smoker lighting up amongst the bright colors of Main Street USA, certain visitors have truly crossed the line.

“I’ve seen someone let their toddler pee in a line and just not do anything about it. I feel like that is bannable.”

“I saw a woman floss her teeth standing in the crowd on the sidewalk in Hollywood Studios.”

Of course, those two are basically tame compared to u/gtlilies82’s contribution added,

“A guy I knew in college got caught having sex in one of the bathrooms. He and the girl he was with were both given lifetime bans.”

Of course, the aforementioned stories are few and far between. Not every Guest will go this level, but appropriate action is taken when they do. However, one occurrence that doesn’t get nearly enough attention is how absolutely cruel some visitors can behave towards the Cast Members. Some get outright berated for simply doing their jobs.

“I saw some lady smack a cm once. This was years ago. She was promptly escorted out and in assumed banned but who knows.”

“Ugh, I was just at Disney World. A dude was riding Test Track in single rider with is girlfriend. IN SINGLE RIDER. First he yelled at the cast member demanding to get seated together, which the cast member obviously said no to. That was bad enough, but when he eventually was about to walk on the ride, he screamed for his girlfriend to get on, using expletives, GET THE F OVER HERE NOW THEY WON’T CARE. She didn’t do it, and I happened to be on the same car as this dude. He continued on in the car with a child to call his girlfriend a Karen and a B***H. Saying never to date someone like her, I was blown away.”

While many of these stories are certainly enough to get some Disney fans up on their hackles, some Guests don’t stop just at Cast Members. One particular interaction shared by u/DVSghost is absolutely disgusting.

“The worst guest behavior ever was a mom at Frozen. A Make A Wish family was brought to the front of the line as per usual. And this one mom exclaims with all of the attitude: “Wow, I wish my kid was dying so I could skip lines too” The entire queue stopped talking to stare at her, the husband looked at her disgusted and just left her there while the loader ushered her to the exit.”

Needless to say, Guest behavior has truly taken a nosedive and the magic is quickly being sucked out of the kingdom. Thankfully, Disney is some action to fix these massively disturbing displays. It won’t be an overnight fix, but Disney won’t truly be the happiest place on earth until visitors check their attitudes at the gate.

What’s the worst Guest behavior you’ve ever seen? Tell us in the comments below!