Figment Turns "Traumatic" as Disney Neglects Their Technology - Inside the Magic 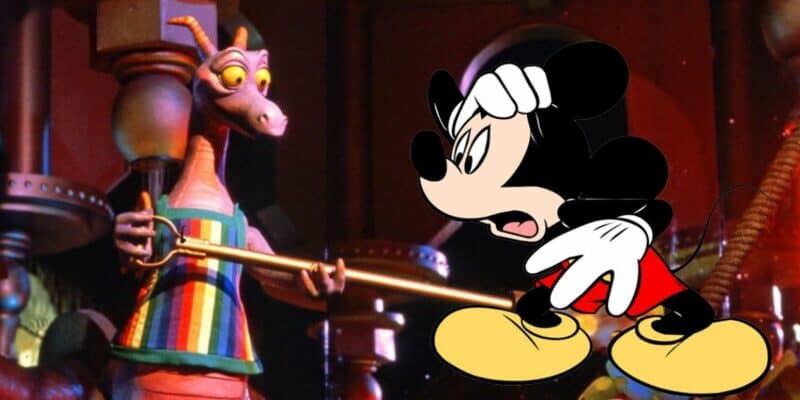 From newer additions coming to Disney’s international theme parks to concerns for those used for Tiana’s Bayou Adventure, Disney’s audio-animatronics have been the recent subject of discussion for many lifelong fans. But while Shanghai Disney is receiving an upgraded Elsa, the ones in the states are truly starting to show their age. That’s an inevitable factor, but what’s getting fans concerned is how little Disney seems to be doing to fix the problem.

Figment is dead – warning this is more traumatic than it should be – at least for me 😟 pic.twitter.com/P5yOIPwPsd

As seen in the footage above from @FiBelleFi, Figment has been rendered to a creepy static figure as Journey Into Imagination continues to show its massive need for an immediate refurbishment. The truly unsettling fact of the matter is that this is just one example of Disney’s neglect for the technology that they themselves helped create. This was also a persistent problem with the recently-closed Splash Mountain, and now Disney fans are concerned that their beloved characters are slowly dying a disturbing mechanical death.

Disney has a steep mountain of problems that consist of more than their animatronics and ride conditions. However, their priorities seem to be misplaced as more reports of malfunctions continue to burble to the surface. Case in point, more attention was given to a pair of “insensitive” dolls on “it’s a small world” than to a fan-favorite ride which fans have been begging Disney to fix for months. It’s true that it’s not the most glaring issue facing the Walt Disney Company, but it’s one that has been circulating the media feeds for a long while. It seems like their primary concern has been focused on their audience’s perception of them rather than maintaining the fixtures that made their audience love them in the first place.

While it’s great that Disney is getting these new attractions, they’ve shown that they have the resources, means,  and technology for upgraded animatronics that the Parks so desperately need. Shanghai Disney might be getting their brand new figures and fixtures, but the original Parks and their attractions are continuously plagued by malfunctions and states of disrepair, and that’s going to grow into a bigger problem if something isn’t done soon. It won’t be long until something happens that causes a fan favorite ride like Figment’s to be completely shut down, and Guests will not be happy about it. So what should Disney do?

An ounce of prevention is worth a pound of cure, and Disney’s animatronics are something they’ve got down to a science. If they can change Park decor from Halloween to Christmas in a matter of hours, there’s no reason they can’t at least give their classic figures a much-needed tune up. They don’t have to gut the entire attraction, but a little TLC to these beloved attractions would definitely go a long way.

Where do you think Disney should start with their repairs? Tell us in the comments below!