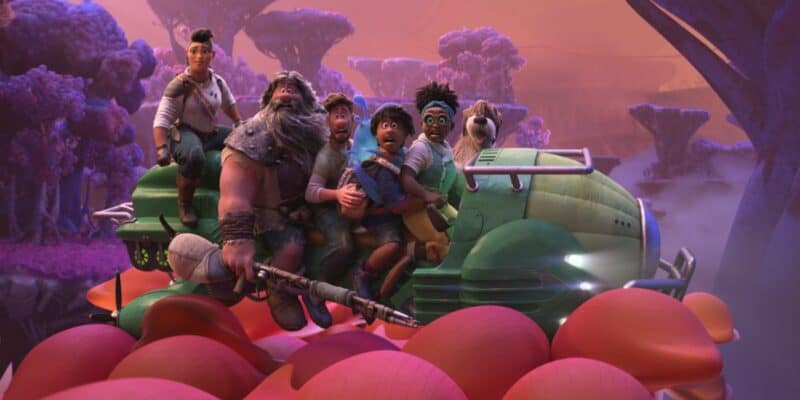 What was dubbed “woke” and the biggest featured film flop in Walt Disney Animation history is now becoming a popular streaming option on The Walt Disney Company’s streaming network, Disney Plus.

The latest movie from Walt Disney Animation Studios, Strange World (2022), is an original action-packed comedy adventure that introduces viewers to three generations of the legendary Clade family as they attempt to band together and navigate an uncharted, treacherous land beneath their world.

The voice cast includes Jake Gyllenhaal as Searcher Clade, a family man who finds himself out of his element on an unpredictable mission; Dennis Quaid as Searcher’s larger-than-life explorer father, Jaeger; Jaboukie Young-White as Searcher’s 16-year-old son, Ethan, who secretly stows away in search of the adventure he’s always wanted; Gabrielle Union as Meridian Clade, an accomplished pilot and Searcher’s partner in all things; and Lucy Liu as Callisto Mal, Avalonia’s fearless leader who spearheads the exploration into the strange world. Strange World is helmed by director Don Hall and co-director/writer Qui Nguyen and produced by Roy Conli.

Disney’s Strange World has been called many things since it premiered this Thanksgiving weekend, some call it a misguided adventure with a shoe-horned environmental message, and many more call it Disney’s “go woke to go broke” movie. Still, an undeniable consensus is that it was a box office flop that will definitely have a lasting effect on the studio. To this point, Strange World has brought in an anemic $67 million and looks like a loss of over $100 million for Disney.

In what many considered a last-ditch effort to save the film, Disney announced that Strange World would premiere on Disney Plus on December 23. The move broke the industry standard of waiting at least 45 days to send a theatrical release to streaming.

Since its release on Disney Plus, the failed film has claimed the top spot on the streaming network and is dominating viewership. The film has been so popular that it has held the number one place for the last week.

Even though the film will most likely go down as a financial failure, it is nice to know that The Walt Disney Company and Walt Disney Animation can still use their creative entertainment apparatus to drive revenue and profits for the company.

Do you think Strange World was a failure? Tell us in the comments below!