Mickey and Friends Are Now Marvel Heroes - Inside the Magic 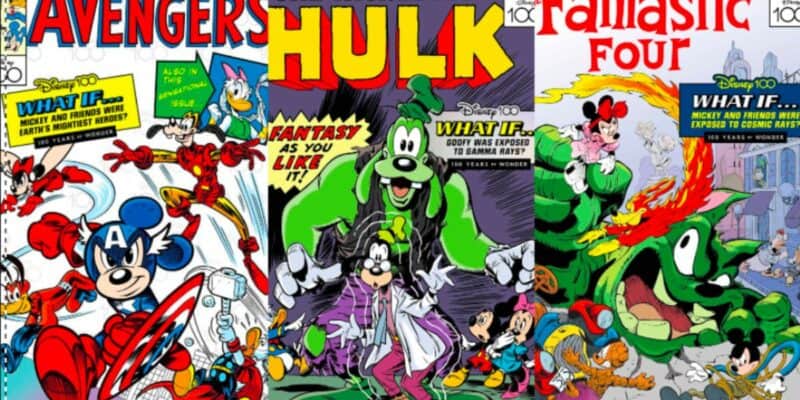 Both the Walt Disney Company and Marvel became household names long before the union of the two entities in 2009. With Disney celebrating its 100th anniversary with its 100 Years of Wonder celebration and Marvel recently honoring the great Stan Lee with 100 years of Stan, it’s only fitting that the two have come together to recognize each other’s big achievement in an impressive crossover event.

In celebration of Disney’s 100 years, Marvel Comics have been releasing variant covers for the upcoming issues of The Amazing Spider-Man. Essentially “What if…?” scenarios featuring Mickey, Donald, Goofy, and the rest of the Fab Five stepping into the roles of famous Marvel heroes, the covers are definitely some impressive pieces of artwork that truly capture the magic of Disney with the might of Marvel. It’s undoubtedly an awesome crossover, but some of the casting choices are a bit out of left field.

While Mickey Mouse goes from Sorcerer’s Apprentice to Sorcerer Supreme as Doctor Strange and Pete transforms into the Mad Titan Thanos, the idea of Goofy as Spider-Man is a bit of an oddball choice, as is the image of Pluto taking on the role of the Silver Surfer. However, the idea of Minnie slipping on the claws of Wolverine is certainly scary. However, depicting Donald as the Human Torch and not the Incredible Hulk is a sorrowfully missed opportunity.

Comic critiques aside, these covers are truly a match made in heaven as both realms collide to the delight of their fans. Disney has been giving its fans a steady supply of magic and wonder, and Marvel has been keeping them locked in an epic battle of heroes and villains for nearly just as long, so it makes total sense that they would join forces in a grand display of what they both provide for their audiences.

The only way this special event could be made better is if the scenarios depicted on the covers of Spider-Man’s latest adventures were carried out as full-length comic adventures. Perhaps in another part of the Multiverse?

What do you think of these variant covers? Tell us in the comments below!