Classic Disney Character to Debut In the US For First Time Ever! - Inside the Magic 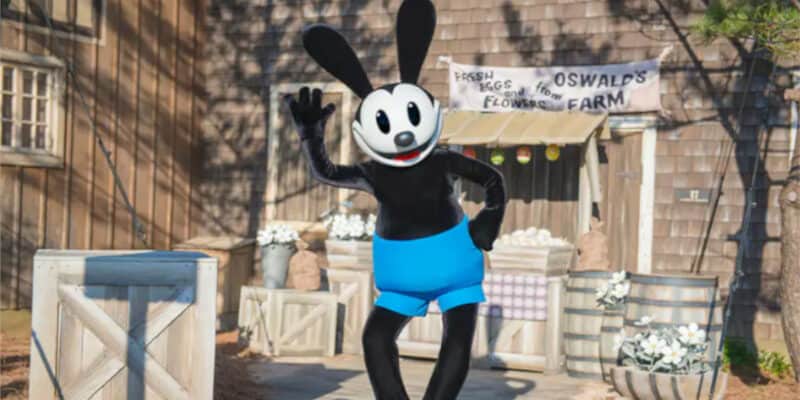 Disney is bringing back a classic character for a meet-and-greet, and it all starts today!

Longtime Disney fans will recall that Mickey Mouse was not the first poster boy of the Disney Brothers Cartoon Studio. During those early years, Oswald the Lucky Rabbit was the go-to guy for both Walt Disney and Ub Iwerks. Oswald got into a lot of the same kind of trouble, had a lot of the same sorts of gags, and was a popular little fellow, but his rights were snatched up by Charles Mintz and Universal, leading to the creation of the Mouse fans the world over love and cherish.

What fans may not be as familiar with are Oswald’s friends! Much like Mickey Mouse, Oswald had a group of friends and compatriots who would accompany him on his adventures. Some of these would turn into classic Mickey Mouse-era characters like Clarabelle Cow, Pete (later a cat, but in this iteration more like a bear or wolf), and his love interest: Sadie/Ortensia.

Bearing similar characteristics to Minnie Mouse, it’s somewhat of a miracle that Ortensia survived. The first handful of shorts in which she appeared, including her debut, are counted among the “Lost” Oswald cartoons, and very little material beyond sketches and concepts has survived. Beyond that, in early iterations, her name was listed as Sadie, though she eventually became Ortensia, matching Oswald’s name like Mickey and Minnie.

With the reacquisition of Oswald by the Walt Disney Company in 2006, the character slowly began to be reintegrated into Disney culture. After the retheme in Disney California Adventure to include Buena Vista street, Oswald became a natural choice for a character meet-and-greet. Still, he was the only one from his generation of cartoons to make the jump in the US until now!

According to the OC Register, shared by journalist Scott Gustin, Oswald’s love interest, Ortensia, will be crossing the pond! The two are scheduled to appear as meet-and-greet characters as part of Disney California Adventure’s Lunar New Year Celebration. The pairing couldn’t be more perfect either: while Oswald represents the Year of the Rabbit in the Chinese Zodiac, Ortensia will be representing the Year of the Cat as part of the Vietnamese Zodiac, both of which occur this year!

Ortensia the Cat will make her first appearance in a U.S. Disney theme Park on Friday.

Ortensia and Oswald will make meet-and-greet appearances during the Lunar New Year festival at DCA from Jan. 20 to Feb. 15. Story via @ocregister.

Ortensia the Cat will make her first appearance in a U.S. Disney theme park on Friday.

Ortensia and Oswald will make meet-and-greet appearances during the Lunar New Year festival at DCA from Jan. 20 to Feb. 15. Story via @ocregister.https://t.co/pubBSFbOpy pic.twitter.com/gqNC3CqLGX

Ortensia’s debut in US Disney Parks will start today, January 20, 2023. Guests can find Oswald and Ortensia in the Paradise Gardens Gazebo from now until February 15. While there is no word yet as to if Ortensia will stick around after the Lunar New Year Celebration concludes, with as popular as Oswald has been on Buena Vista Street, it wouldn’t be surprising if US fans saw more of her!

What do you think about Ortensia appearing in the US? Let us know in the comments below!