Non-Disney Hotel Promises a Disney Experience, Provides a Nightmare - Inside the Magic 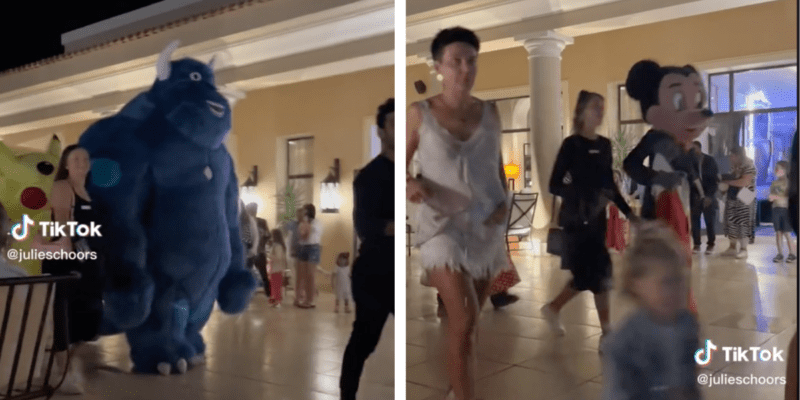 Disney Parks are known for their awe-inspiring parades. For over 50 years, Walt Disney World Resort and Disneyland Resort have delighted Guests with performances like the Festival of Fantasy Parade, Main Street Electrical Parade, Paint the Night, Mickey’s Boo-to-You Parade, and Mickey’s Once Upon a Christmastime Parade.

But one Guest traveling internationally was surprised to find a Disney Parade where she least expected it. Julie Schoors was visiting a hotel in Egypt when she witnessed a performance so shocking that she couldn’t help but film it:

“POV: When your Egyptian hotel promise you a Disney parade,” Schoors wrote.

In the video, employees march to a sad drumbeat in poorly-constructed costumes of Mickey Mouse, Minnie Mouse, Sulley from Pixar’s Monsters, Inc. (2001), Piglet, and The Fairy Godmother. Non-Disney characters like Pikachu, Sonic the Hedgehog, Diego from Dora the Explorer and Go Diego Go!, and an unidentified lion also joined the parade. Families with children follow closely behind.

While some kids looked to be having a good time, most appeared confused. Commenters were quick to joke about the quality of the character costumes and the awkward music.

Me: mom i want disney

Mom: we already got disney at home

Others pointed out that each Disney Character looked less than thrilled to be there. “Why does this look like they’re walking to the gallows?” asked @alfiekimmins.

“It looks like a prison transfer what is this 😂😂😂,” @steffievans8 joked.

“Mickey Mouse walks like a businessman in the metro station 😭,” @drugors said.

This parade clearly wasn’t authorized by any Disney Park. But many “unofficial” Disney mascot costumes are regularly sold and used in places like Times Square in New York City, The Las Vegas Strip, and Hollywood Boulevard in Los Angeles. Some businesses even use such costumes for kids’ birthday parties and other events. Though The Walt Disney Company is strict about copyright, it hasn’t legally acted against many businesses using these costumes.

Have you ever seen a fake “Disney Parade?”

Comments Off on Non-Disney Hotel Promises a Disney Experience, Provides a Nightmare